Should you have a car at Disney?

We live in the San Antonio area, so our Disney trips always start with an airplane ride. It’s a 16+ hour drive for us. With stops, it would be a two day trip for us. Each way. So, we fly. 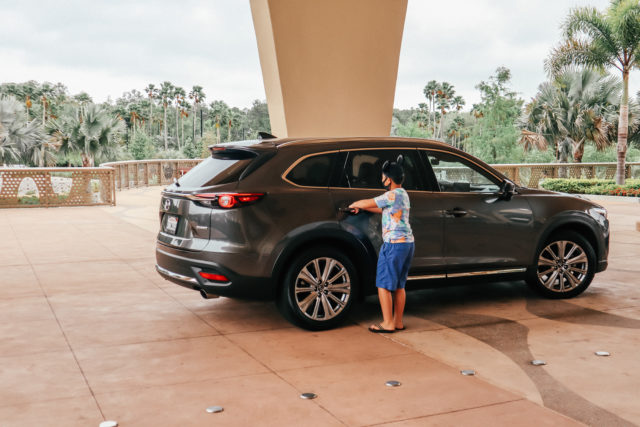 Walt Disney World offers robust transportation from the resorts to the park and from park to park but lots of people drive their own cars. Here’s our experience.

Earlier this year, Disney announced they’d be getting rid of the Magical Express entirely in 2022. For the remainder of 2021, the buses will run but Disney no longer provides us with that magical baggage handling service.

I was seriously irked by this. I know part of what makes Disney special and unique is their ability to change and evolve. Maybe that was all well and good until they got rid of something I really like. You can read more about this change and others here.

I am mostly past this now. Mostly.

Thinking of booking your own Walt Disney World or Disneyland California vacation?

Check out my partner, Get Away Today for the best deals and white glove service. 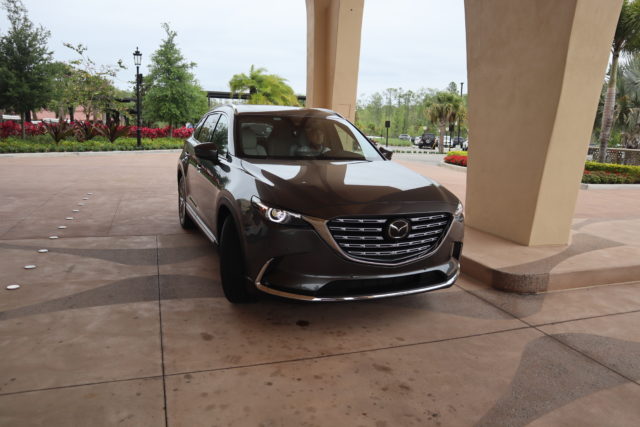 But. After January 1, 2022, we are without a ride from the airport and vice versa. Lyft, Uber and private shuttles all work, as does car rental but the Disney’s Magical Express was one thing all those things are not.

I swear, I’m mostly past this. Moving on.

Opportunity to drive a 2021 Mazda CX-9 in Orlando

The Mazda CX-9 is a crossover with a third row that has a luxe look and feel. It’s similar in size and features to what I drive every day at home – the Hyundai Santa Fe. The Mazda CX-9 had nearly the same amount of room but felt more high end with the luxury touches and upgraded trim. 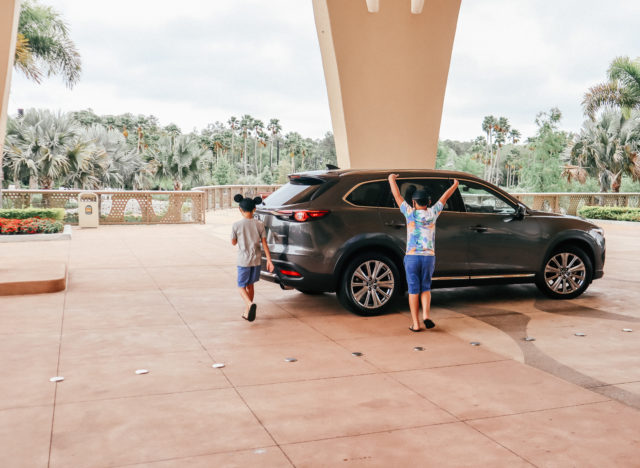 Even though post Magical Express Disney means handing your own bags, it’s pretty easy when you’re driving. This is the entrance to Disney’s Coronado Springs Resort’s Gran Destino Tower. We rolled up, got a baggage cart (porters are available if you need assistance) and my husband parked the car while we went up to our room. Couldn’t have been easier.

Driving at Disney World is much less daunting than I’d imagined it to be and thanks to Mazda, we were able to do it in style!

I’ve honestly never paid attention to the traffic or the roads on the way to Walt Disney World Resort from Orlando International Airport. But, finding your way isn’t a problem. We used Apple Car Play to navigate our route. The Mazda CX-9 model we drove had a built in navigation system but we prefer to use Apple Car Play because it is what we’re used to during our every day driving.

When we arrived at our resort hotel, we were directed where to park for check in. It couldn’t have been any easier. 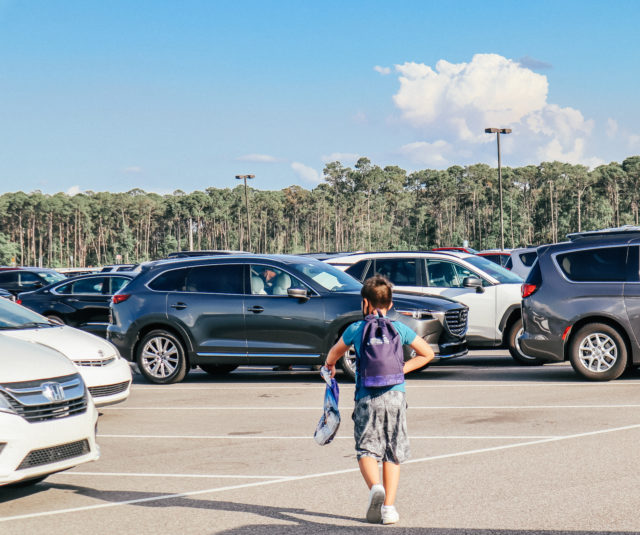 Just a boy and his Droid backpack heading to the car at the end of a fun (long!) day.

Getting to and from the parks was pretty easy – again, follow the purple signs – but there was a learning curve getting to Disney’s Hollywood Studios. We accidentally drove into the back lot area AND in a bus only entrance before getting where we were supposed to be. It was a little confusing but it all worked out. In hindsight, it would have helped to look at a map versus just plugging the name of the park in to the navigation.

When you drive through the park’s gate, you’ll verify that you’re a registered resort guest (in which case, you’ve already paid for your parking since you parked at the resort) or pay for your parking. From there, you’ll be directed by a Cast Member on where to park. Easy peasy.

Currently, (as of Apr 2021) there are no trams running from the parking lot to the entrance so if you don’t park up close, you’ll have to walk. There is preferred parking available (closer) for an additional cost.

That’s it! It was incredibly easy and I loved being on our own timetable. The buses are great but right now, they’re running at a reduced capacity to maintain social distancing and it was nice to be able to go when we were ready to go without standing in a line. 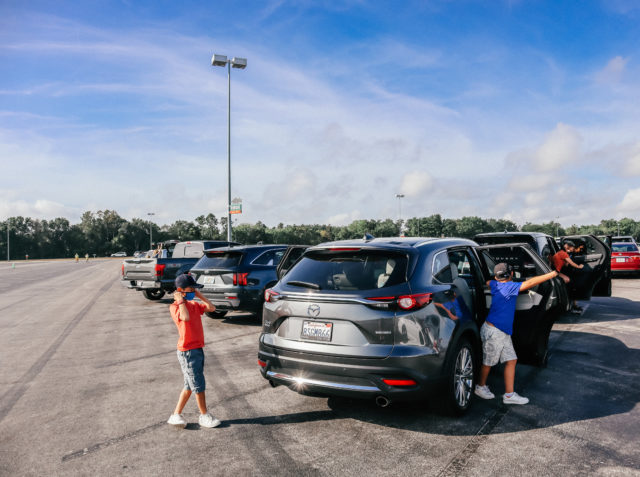 We stayed at two different resorts during our most recent trip: Disney’s Polynesian Village Resort and the new Gran Destino Tower at Disney’s Coronado Springs Resort. From both locations, our drive time to the park was 8-10 minutes.

1. Staying off the Disney property?

If you’re staying at a non-Disney resort, you’re on your own to get to the hotel from the airport. Once Magical Express fully goes away, none of the Orlando area hotels will be providing transportation to and from the airport.

In general, the further from the parks you stay the cheaper rooms you can find. However, that means you’re probably on your own to get to and from the parks each day. Make sure you factor in parking fees, time, and gas.

2. Extending your time in Florida

If you’re checking out another Florida destination on your Disney trip (on this trip, we went to Tampa Bay) then you’ll definitely want to have a car. Aside from Walt Disney World, the Orlando area has Universal Orlando Resort, LEGOLAND Florida, SeaWorld and more.

You can also take extended day trips outside the Orlando area, such as The Kennedy Space Center in Port Canaveral or Busch Gardens in Tampa Bay. These two destinations are about an hour and a half from Orlando and you can easily use Orlando as a hub to check out these attractions.

3. Flying into an airport other than MCO?

If you are renting a car, make sure you crunch the numbers first. Alternate airports may have higher car rental rates than MCO so make sure the savings in airfare isn’t costing you more in car rental.

I think there’s never enough time at Disney World. Although I believe the ideal trip length is five to seven days, but that’s not always possible. Park to park transportation is available but when you don’t have a lot of time, you might not want to spend it waiting on a bus. Having your own car puts you on your own time table. Our trip was medium length (four nights at Walt Disney World) and I feel having our own transportation with the Mazda CX-9 really helped us have fun in the parks longer.

You still have to deal with traffic and parking and then walking to the entrance but you can generally get from place to place faster if you’ve got your own wheels.

If you’re spending a full week at Disney, waiting in line for a bus might be no biggie but for families who are trying to squeeze as much magic as they can into a couple of days, having your own car, like the Mazda CX-9, may be what works best for your family.

Driving the Mazda CX-9 at Disney World? It was a win for us. It’s comfortable – even though our park to park and resort to park trips were short – and it had plenty of room for our luggage. Plus it has cooling seats which is a must for Florida driving. Read more about the Mazda CX-9 in the next section. 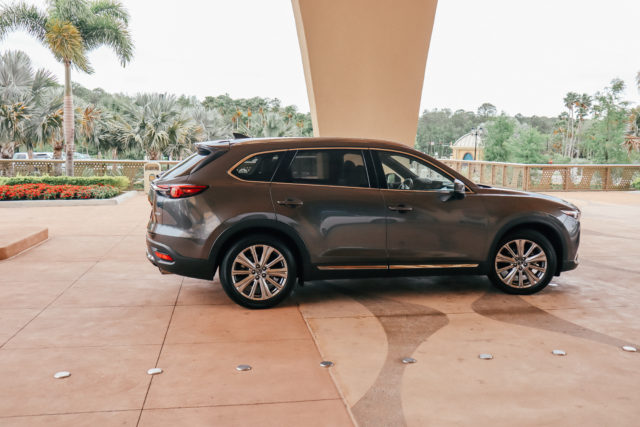 While we usually equate mid size crossover with mid size families, the Mazda CX-9 is sleek enough to appeal to lots of different people.

Who is this car for?

While I think any crossover with a third row screams “family car” this sleek looking ride will appeal to anyone who needs some extra room, although the appearance of the Mazda CX-9 is so posh, maybe it just whispers it.

The second row captain’s chairs are super roomy. Granted, my kids just graduated out of booster seats (which they are SO happy about) but there’s ample legroom for adults in the second row if you need to transport other adults. I think the third row is a little small for most adults.  Climbing into the third row is a little bit of a squeeze but it works in a pinch. This would be fine for transporting extra kids.

If you have more than three kids, I wouldn’t recommend this as an everyday car but it’s great for a two kid family. We were super comfortable during our week driving the CX-9 and would consider buying this model in the future.

I really liked the ease of configuring the third row and the rear cargo space. We didn’t – and generally won’t – use the third row but I like being able to change up the rear space easily. We had five suitcases – which is a LOT for us – plus four backpacks – and we had plenty of room.

Let me know if you have additional questions about driving at Walt Disney World or the Mazda CX-9. I hated to leave both! 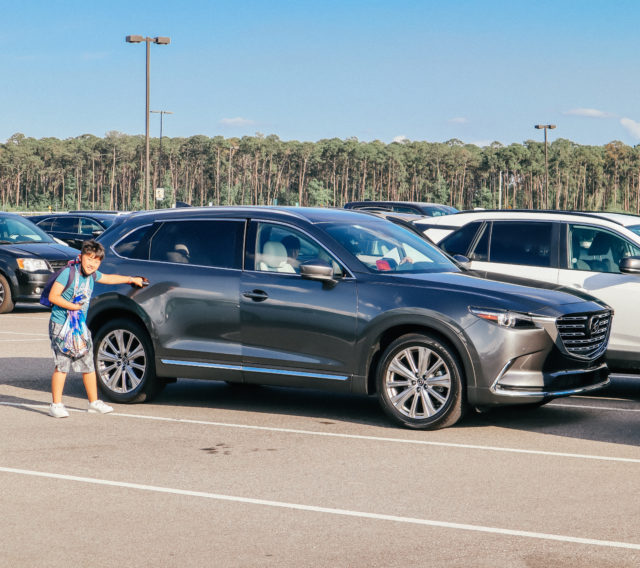 Easy to drive and park. Lots of room inside. Comfortable. And, COOLING SEATS – A must for Florida! 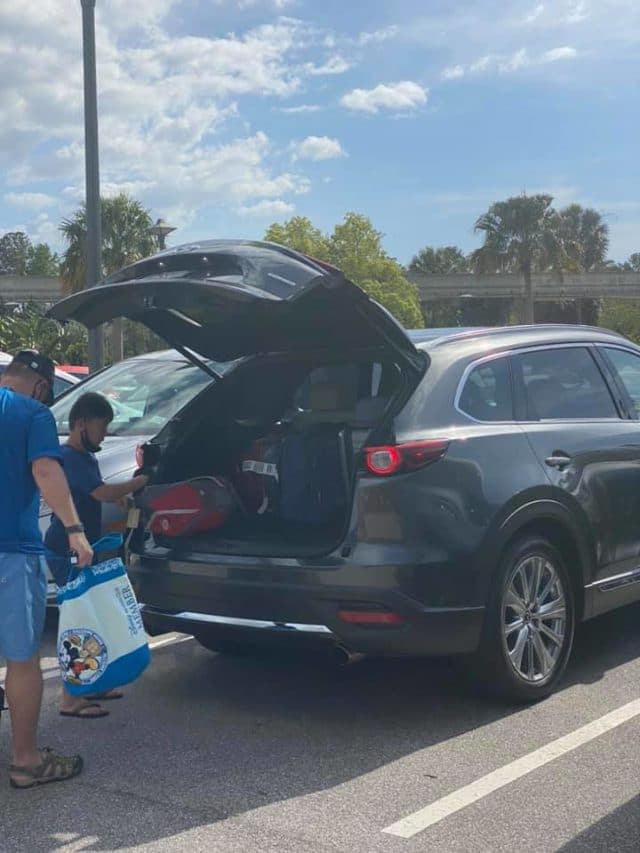 We found the fold down third row more than roomy enough for our stuff. We are usually pretty light and minimal travelers but had extra on this trip.

If you are looking for a roomy third row, this is really it. The seats were narrow and unless the second row is pushed far forward, there’s not much legroom. That said, most mid-size crossovers’ selling point isn’t going to be the roomiest of third rows. 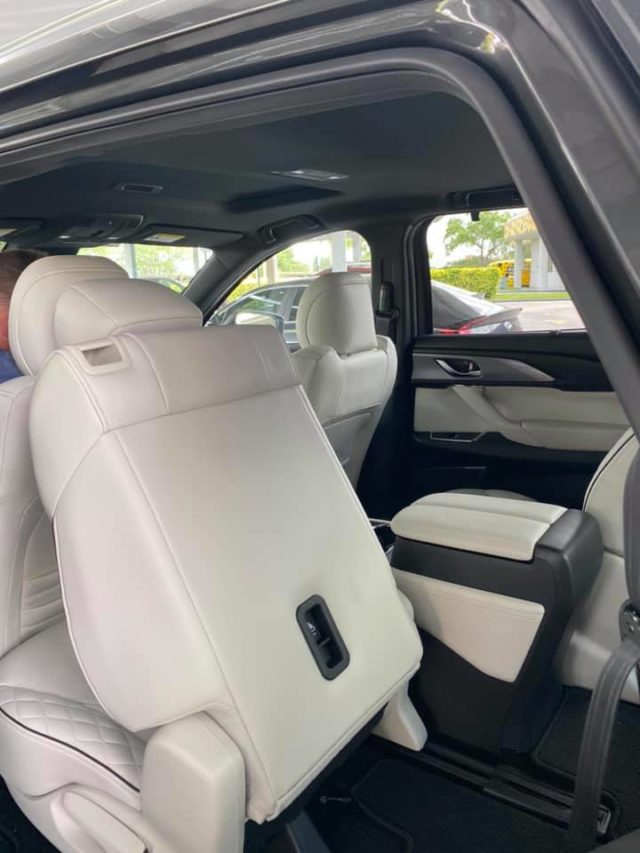 This is the second row pushed all the way forward. It’s still a little bit of a climb to get into the third row. 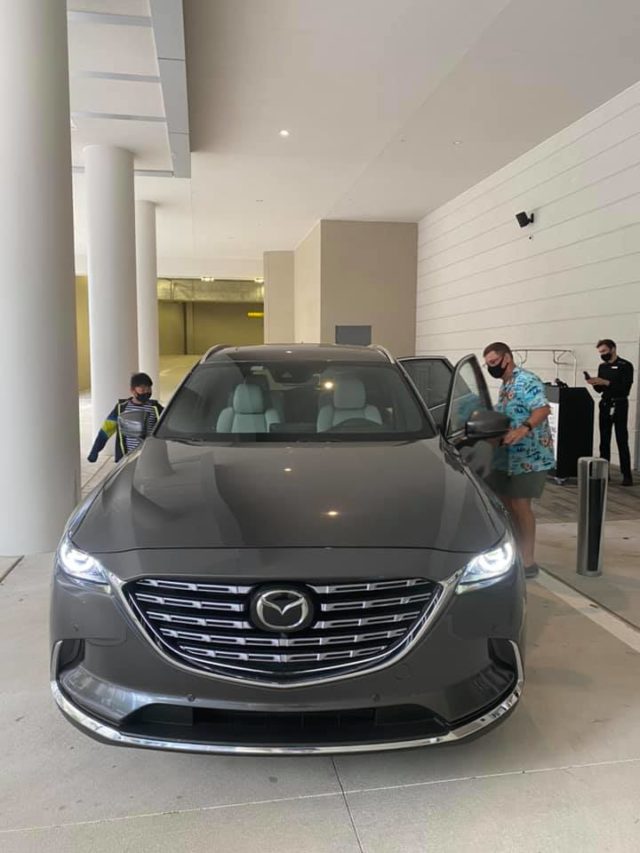 Overall, we really loved this car. It’s a very comfortable everyday ride for a family of four and the occasional third row passenger (preferably a kid or a smaller adult.) 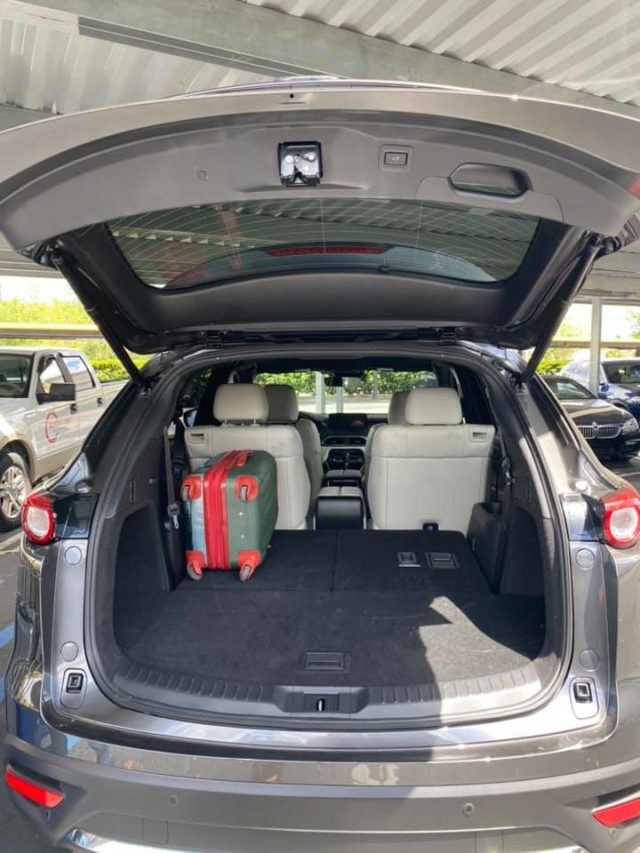 We had four small suitcases like this one plus a larger bag plus backpacks. There was still lots of room.

Six Reasons to use a Disney Vacation Planner

Six reasons to do Disney without kids

How to plan a trip to Destin

Southwest Airlines flies direct to Bradenton/Sarasota from these four cities

« LightStream Loans and Planned Debt: What You Need To Know
Disney World Changes for 2021 – Updated! »