Plus…they are just so darn cute I had to be able to say I’d ridden in one! Here’s what you need to know about Minnie Vans and Lyft at Disney World. 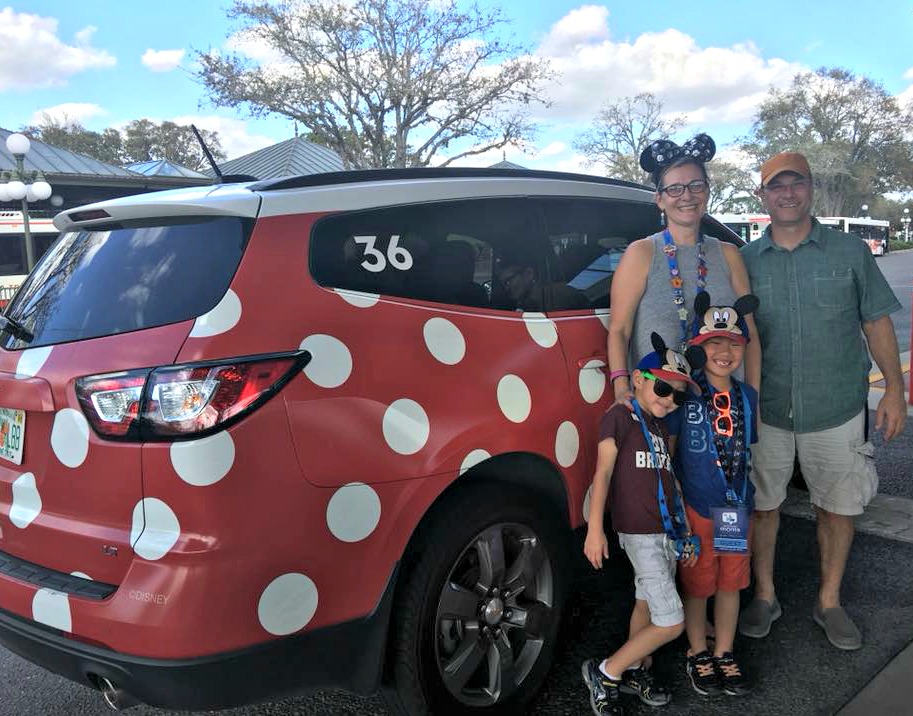 Expensive? A little. Adorable? You bet. 1. The Minnie Van service is operated by Lyft at Disney World

You’ll need the Lyft app on your phone to be able to use this service so download it in advance of your trip. The app is free in the iTunes Store and Google Play Store.

If you are a registered guest at the resort where your ride originates, you should automatically see the “Minnie Van” option when you request your Lyft. If you don’t see it or if you’re not a registered guest, see a cast member at the front desk and they can quickly unlock the option for you. The Minnie Van option didn’t show up for us at first, even though we were registered guests at Disney’s Animal Kingdom Lodge but the cast member at the front desk took care of it faster than you can say Bibbidi Bobbidi Boo. I’m not sure if it was a first-time Lyft user thing but it worked like a charm after that. 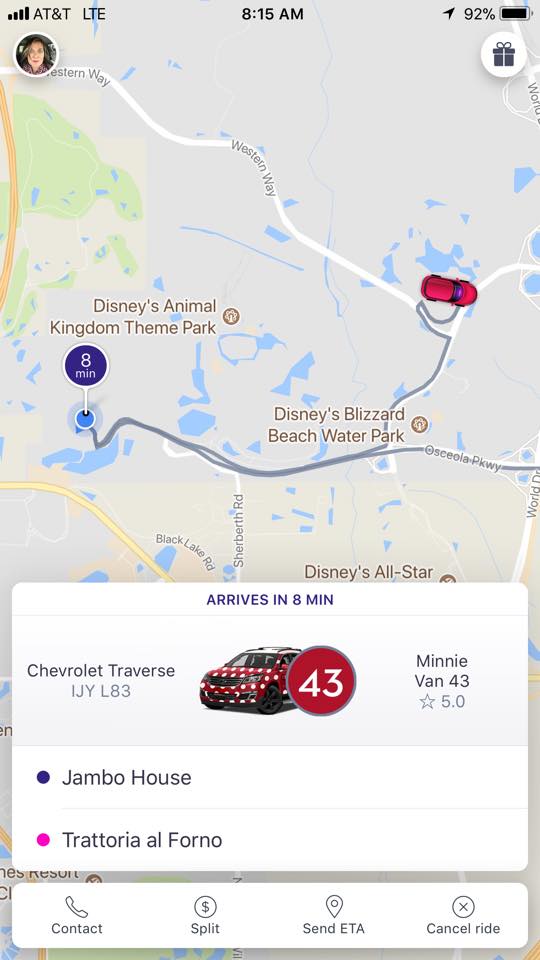 The Minnie Van service operates just like regular Lyft at Disney World or anywhere else you’d use Lyft.

We typically use Uber at home so the Minnie Van service was our first experience with Lyft and we loved it. We’ve had a lot of people ask us about the “Disney Vans” after seeing our pictures with the adorable polka dot Minnie vans and we’re excited to tell you everything you need to know about using the Minnie Van Service.

We used the Minnie Van Service for the first time when we needed to get from Disney’s Animal Kingdom Lodge to Trattoria al Forno on Disney’s BoardWalk for an early character breakfast. We waited about seven minutes for our ride.

Read more about the Bon Voyagre Adventure Breakfast HERE. It is, to date, the only Disney character meal to feature Disney princes.

When you request your ride, you’re given an estimated time of arrival and also the number of your Minnie Van, so she’s easy to spot. I think “Disney Van” is a great way to describe the Minnie Van, actually. The appearance couldn’t possibly be any more Disney.

Related Post: Pack for Disney World with these three easy to forget items

Minnie Vans are equipped with two car seats and the driver (who is a Disney Cast Member, how cool is that!) is trained on car seat installation and safety.

The Minnie Vans are clean – as in pristine eat off the floor mats clean – and the Cast Members are knowledgeable and friendly (no surprise there) so we spent the majority of our trip chatting about Disney (always awesome) and getting tips on things to do and see at our destination.

Note: I didn’t actually try and eat off the floor of these adorable Disney Vans and I probably don’t recommend that you try it. That said, the interior really was sparkling clean. 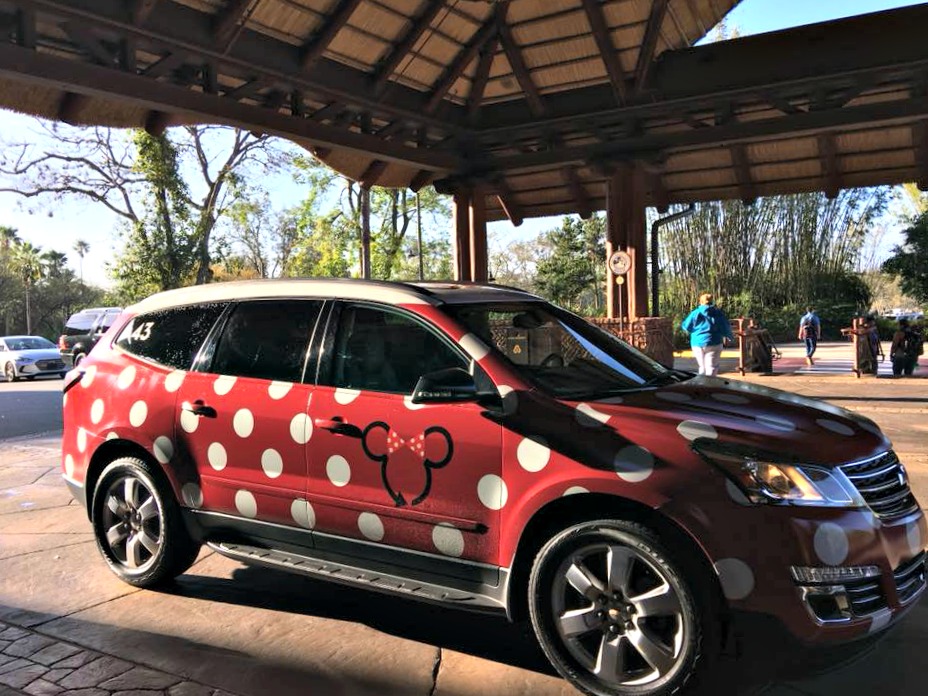 The Chevy Traverse has three rows of seating and lots of room inside.

Disney generally does a great job with transportation. Disney’s Magical Express that gets you to and from the Orlando Airport and the transportation systems that run from the resorts to the parks and between the parks – buses, boats, and my favorite, the Monorail) is seamless, although you will often wait in a long line, especially during peak hours or at the end of the night.

3. The Minnie Vans can fill a much-needed gap in Disney transportation

If you want to go from one resort to another, things start to get tricky. Disney doesn’t offer complimentary resort to resort transportation. If you want to get from Resort A to Resort B, the only way to do it is via one of the parks…although some resorts are within walking distance of one another and, if you’re going between resorts on the Monorail Line or around Disney’s BoardWalk, it’s not that bad.

The Walt Disney World property is roughly 40 square miles, though, which is about the size of San Francisco. You can’t say it is or isn’t to get around Walt Disney World on foot because it really just depends on where you’re going. We’ve found using the Minnie Van service and Lyft at Disney World to be a great option.

We like to stay at Disney’s Wilderness Lodge. We’re Disney Vacation Club members and the villas at Copper Creek are our home resort. One of our favorite resort to resort hacks is to jump on the Disney Springs bus from Disney’s Wilderness Lodge because it stops at Disney’s Contemporary Resort. We can explore that resort or visit one of their restaurants without having to pay for transportation using these adorable Disney Vans. 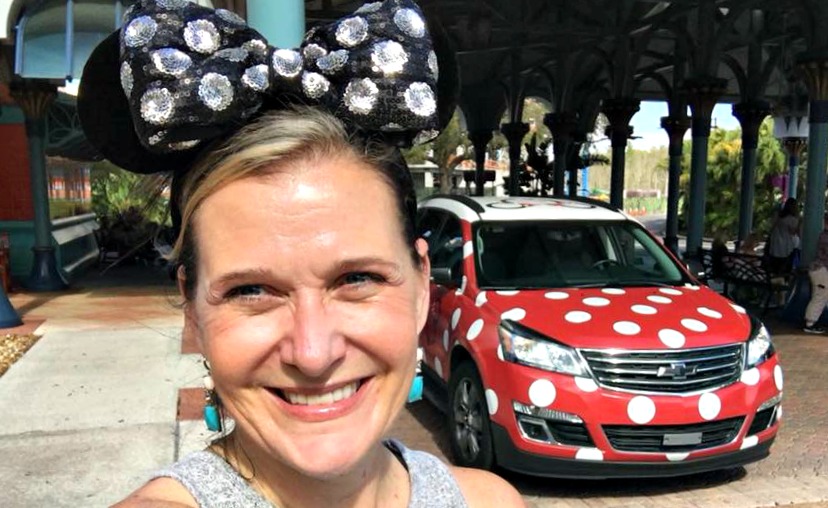 My ears match my ride…that is just how I roll (see what I did there?)

There are a lot of great shopping and dining experience that are outside the parks and in the Walt Disney World resort hotels, especially character breakfasts. Popular Chef Mickey’s is at Disney’s Contemporary Resort and Ohana (breakfast with Stitch or a fantastic Hawaiian Luau dinner) is at Disney’s Polynesian Village Resort. There are lots of other character experiences and dining experiences outside the parks that you don’t need a park ticket to enjoy. The Minnie Vans really come in handy when you’re going from resort to resort.

To see a list of my favorite character dining experiences, read here.

We were scheduled to attend an early character breakfast at Trattoria al Forno on Disney’s BoardWalk and we were staying at Disney’s Animal Kingdom Lodge. Disney’s Animal Kingdom Lodge is the only Deluxe Level resort where bus service is the only Disney transportation option. To get from where we were to where we needed to be was going to be quite the production. Utilizing the free (and yes, there’s a lot to be said for free) Disney transportation, we’d have had to take a bus from Animal Kingdom Lodge to the one of the parks and then take a second bus to Disney’s BoardWalk. Buses usually run ever 20 minutes, so depending on timing, we were looking at at least an hour’s travel time to get to breakfast. Character breakfasts are awesome but they become less awesome for everyone getting there is a major production.

Minnie Vans are a flat rate of $25 – each way. That’s more expensive than a traditional Lyft at Disney World or Uber. As mentioned already, the Minnie Van can get you places a regular ride share can’t…like closer to the park entrance. Ride shares have a particular drop off and pick up point, which is usually a bit of a walk from the park entrance. Minnie Vans can get you pretty much wherever the buses go.

We’ve paid an average of $10 each way using regular Lyft at Disney World. Mileage (pun intended!) will vary depending on where you want to go. As I mentioned, it is a very large property.

4. Why use the Minnie Van Service versus free Disney Transportation?

My general advice is for people to plan for 90-minutes to get from one park to another. If you’ve only got a couple of days at Disney World, paying a little money to get some of that time back might be worth it.

We’ve found Disney transportation to be comfortable, friendly, and (mostly) reliable, but the wait times can be…well, more than you want to wait. We’ve waited almost an hour for a bus to take us from the parks back to the resorts. Buses are supposed to run about every 20 minutes but different factors can make the wait longer.

The Minnie Van service is easy. Punch a few buttons on your phone. Go to the pickup point. Ride in comfort and get to where you’re going while everyone else is still waiting in line.

We also took the Minnie Van Service from Coronado Springs to the Magic Kingdom on an afternoon where we wanted to maximize our time in the park. Yes, it was more expensive but it gave us an extra hour to hit the rides, so it was worth it. 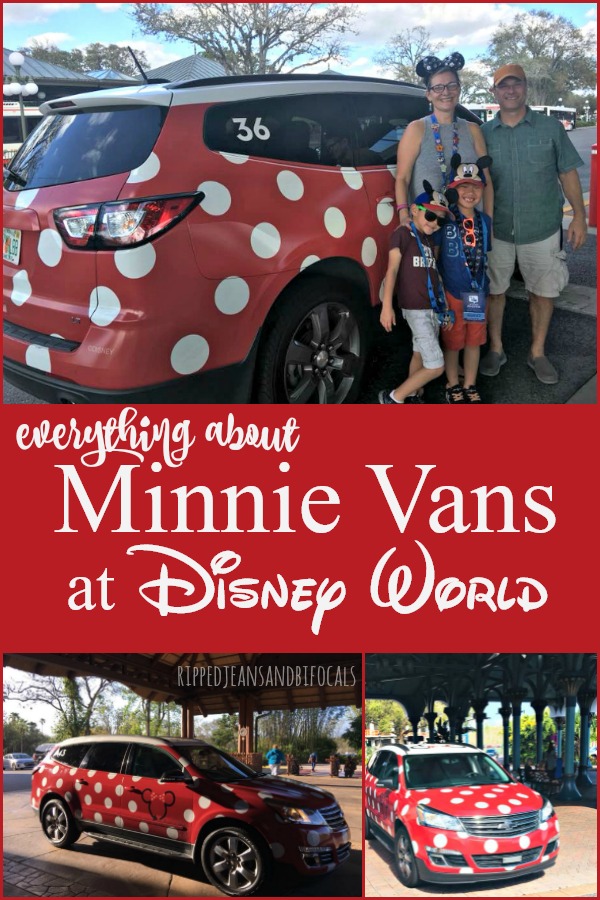 5. The Minnie Van can replace free Disney transportation if you’re prepared to spend

Should this be your primary means of navigating your way around Walt Disney World Resort? Yes, if you budget for it. $25 a pop can add up quickly. If you’re using the Minnie Van to get to the parks in the morning and to return to your resort hotel in the evening and do one park-to-park transfer per day, that’s $75 per day. Only you can decide whether that level of spend is worth the time saved.

If you don’t need the child seats, don’t mind a little extra walk to get to the park entrance, and aren’t in a huge hurry, I’d recommend you opt for regular Lyft at Disney World or Uber at Disney World. Minnie Vans drop you off at the area where the Disney buses drop you off, which can save you some steps when you’re coming and going.

We try to use the free Disney transportation as much as possible. While it is nice to get where we want to go faster, we prefer to spend that money somewhere else at Disney World.

We do like knowing the Minnie Van service is an option when we need it.

Disney World Experiences Not Inside any of the Parks