If you’ve been waiting for the release of Disney’s Christopher Robin (and really, who hasn’t been?) your wait is OVER! I first learned of this movie in February when executive producer Kristen Burr introduced it to a group of bloggers at Disney Social Media Moms Celebration in Orlando. I’ve seen the full movie twice and I’ve seen the trailers about ninety bazillion times (only an ever-so-slight exaggeration) and I’m super excited that all of you can go see it now as well. I’m so honored to have been invited by Disney Studios to attend the World Premiere of Disney’s Christopher Robin earlier this week (yep, on Monday night I was sitting front row center in a theater full of famous people at Disney Studios munching popcorn) and eager to share my review of Disney’s Christopher Robin here on my blog. 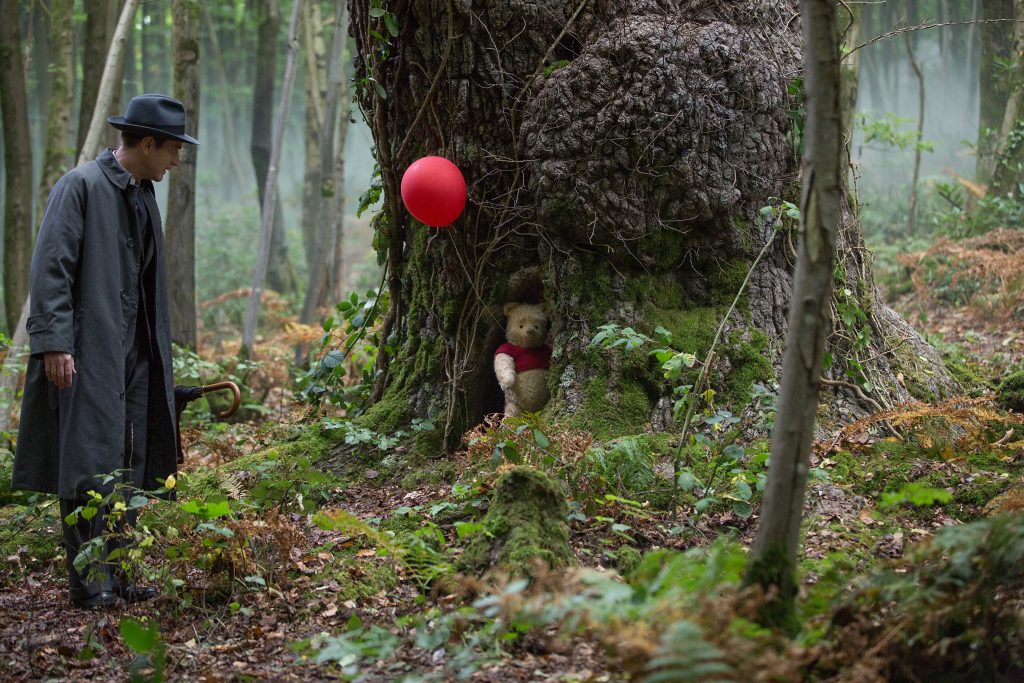 The first thing I want you to know is that this isn’t just a kids movie.

Yes, take your kids but if you don’t have kids (or have an opportunity to go see a movie without your kids) don’t write this one off. Christopher Robin is for all of us. It’s a very “feel good” movie and, while you will leave smiling, you will have all the other feels while you’re watching it. Bring your tissues. I saw Christopher Robin twice and I cried most of the way through it the first time, although it was a very cleansing cry versus an “I’m so sad” cry.

There’s something in this movie for everyone.

The second thing I want you to know is that this isn’t a “remake.”

There’s nothing wrong with a remake, a re-imagination, an update, a re-fresh or whatever you want to call it. I know there are purists and traditionalists out there that will probably disagree with me but I say – well, I usually say – there’s nothing new under the sun and a fresh perspective is sometimes OK. 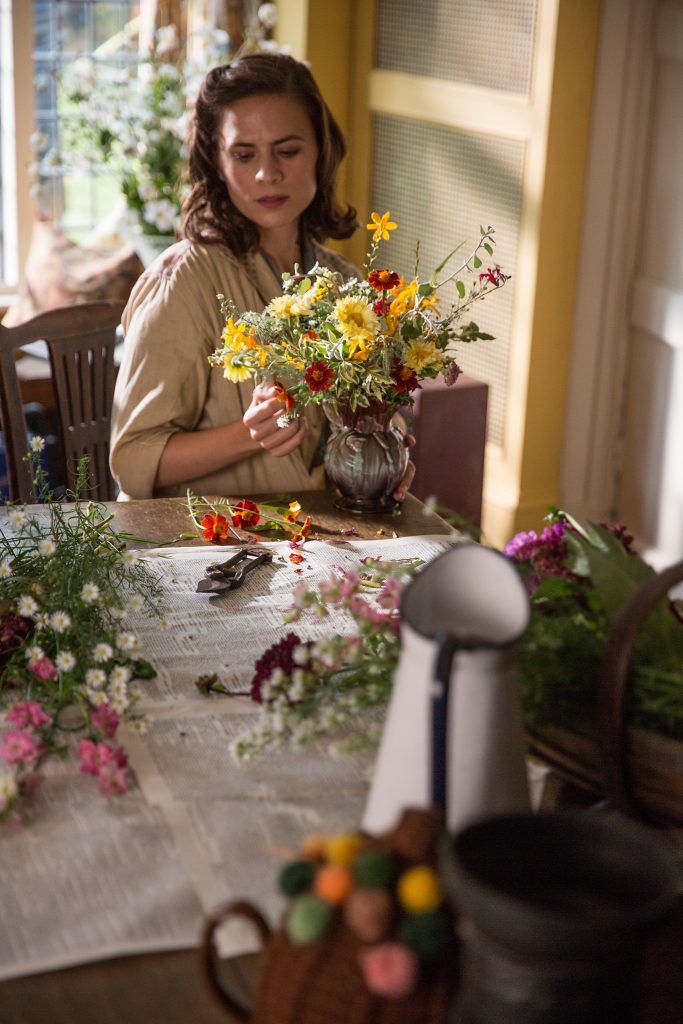 Disney’s Christopher Robin is a whole new story set in post World War II Britain. Christopher is married with a daughter of his own, Madeline. After he comes home from the war, he gets a job at a company that manufactures luggage and that’s where the main story picks up. He appears to be living a rather joyless life. He’s that dad who loves his daughter but also the crab apple who gets up and closes the door to his study when she’s trying to be silly and whimsical and engage him in a dance party. 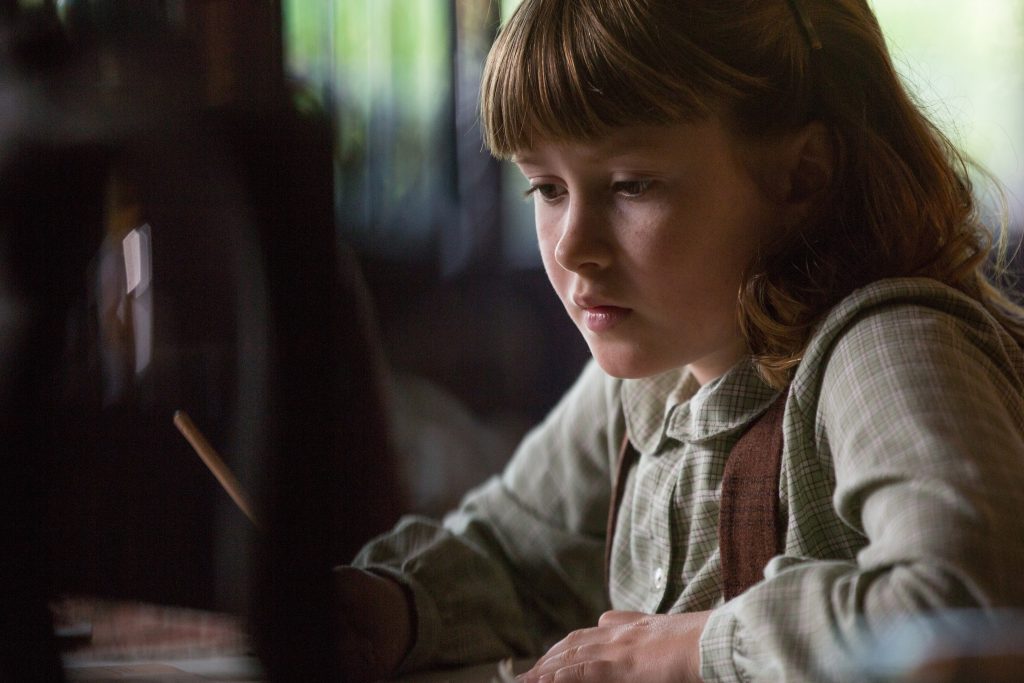 There are two new characters introduced, Evelyn, Christopher Robin’s wife, and Madeline, his daughter. Although we are familiar with Christopher, we don’t see much of the young boy in the grown up version…at least not at first, so I’d almost count him as a new character as well. The lovable characters from the Hundred Acre Wood: Pooh, Tigger, Pigler, Rabbit, Owl, Kanga and little Roo are updated versions of the animated friends we know and love. More on that in a minute.

These updated versions of our favorite friends are completely believable and real.

There is a small prequel where we see young Christopher Robin and his Hundred Acre Wood friends having a “goodbye party” and a glimpse at what Christopher’s life was life just after he went away to boarding school. There are some fleeting scenes that set the tone for the main part of the film, such as how he meets his wife and his “going off to war” story but the main plot line picks up when Christopher’s daughter Madeline is about 10 and Christopher is struggling with what we now call “work life balance.”

Christopher must miss a planned weekend in the country with Evelyn and Madeline because his boss has given him a hefty project due on Monday. Any parent who has ever had to bail on their family due to work commitments (raises hand) is going to sit up and pay attention to this part of the story line. It is definitely something that made me look inward. 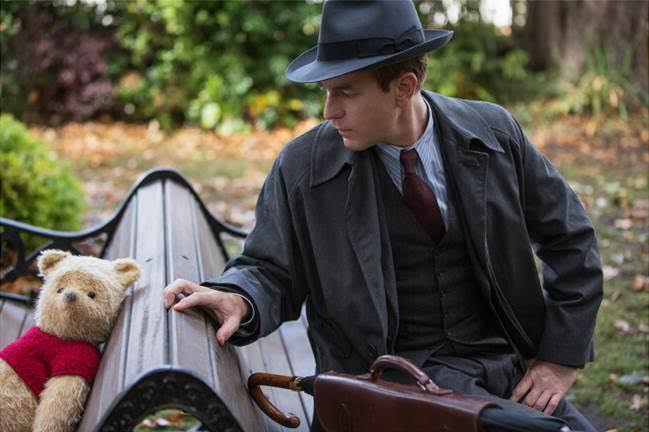 Meanwhile, back in the Hundred Acre Wood, Pooh wakes up and can’t find his friends. By the way, when Pooh gets out of bed in the morning, he does “stoutness exercises” to make himself hungry. It’s crazy adorable. Pooh happens on the door “through which Christopher Robin has been known to appear” and goes through it. 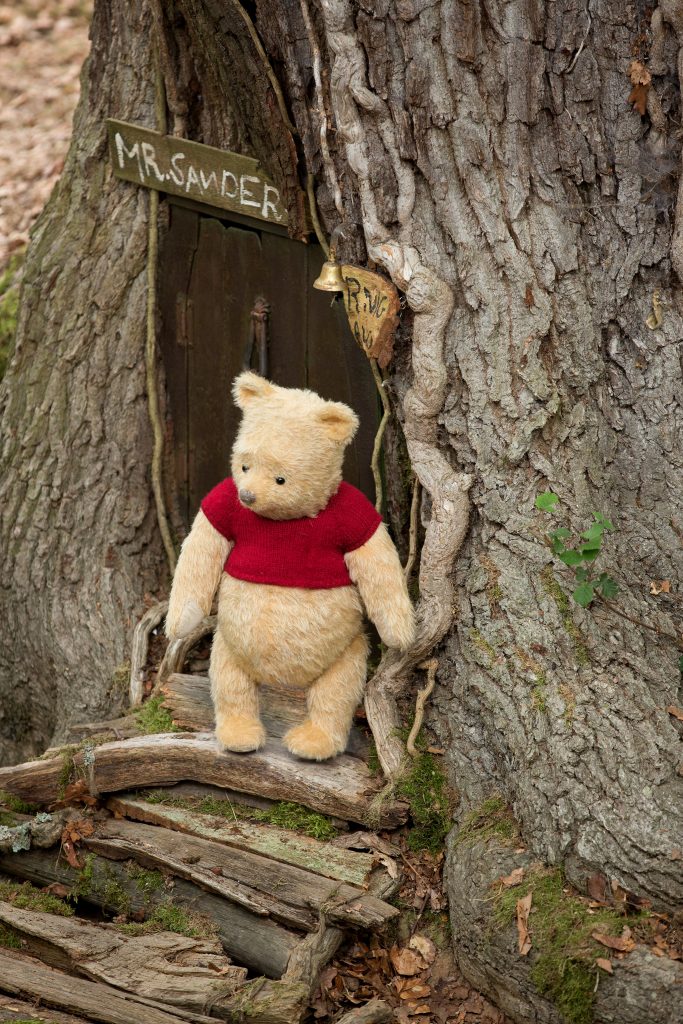 “The door from which Christopher Robin has been known to appear.”

Christopher and Pooh are reunited and instead of being delighted to see the “silly old bear” Christopher Robin is tense and grouchy with a good dose of “I don’t have time for that.” He takes Pooh back to the Hundred Acre Wood where he is reunited with his old friends. 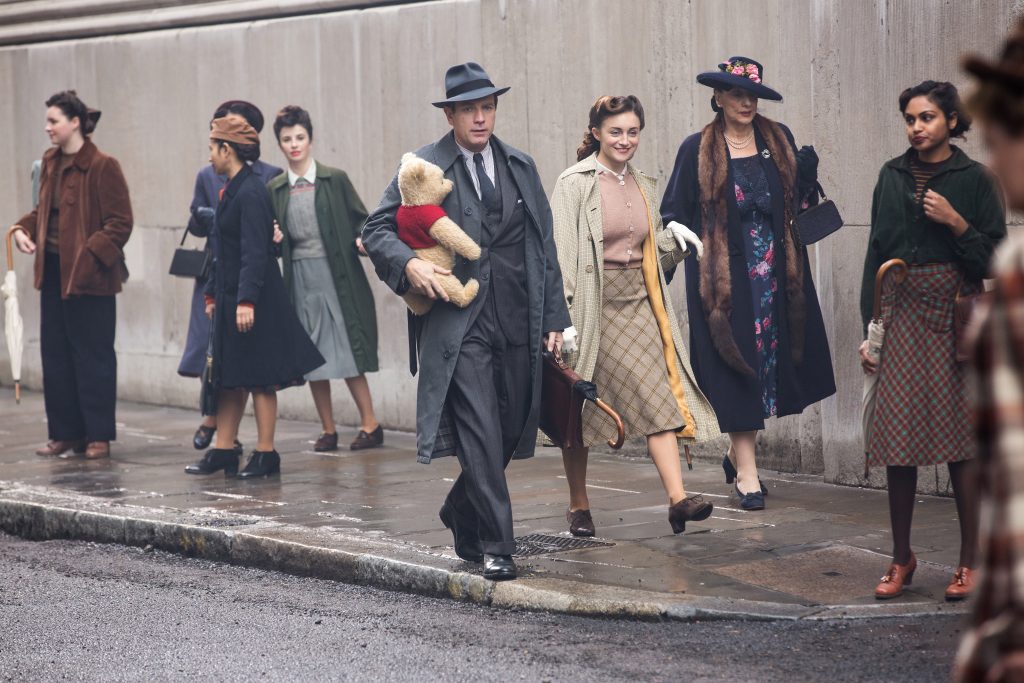 There are story lines involving Madeline and the Hundred Acre Wood friends, tension between Christopher and Evelyn over his lack of being present – she tells him “I didn’t fall in love with you because you had your career set up” and the story line of the problem Christopher Robin must solve at his job. They all tie together. 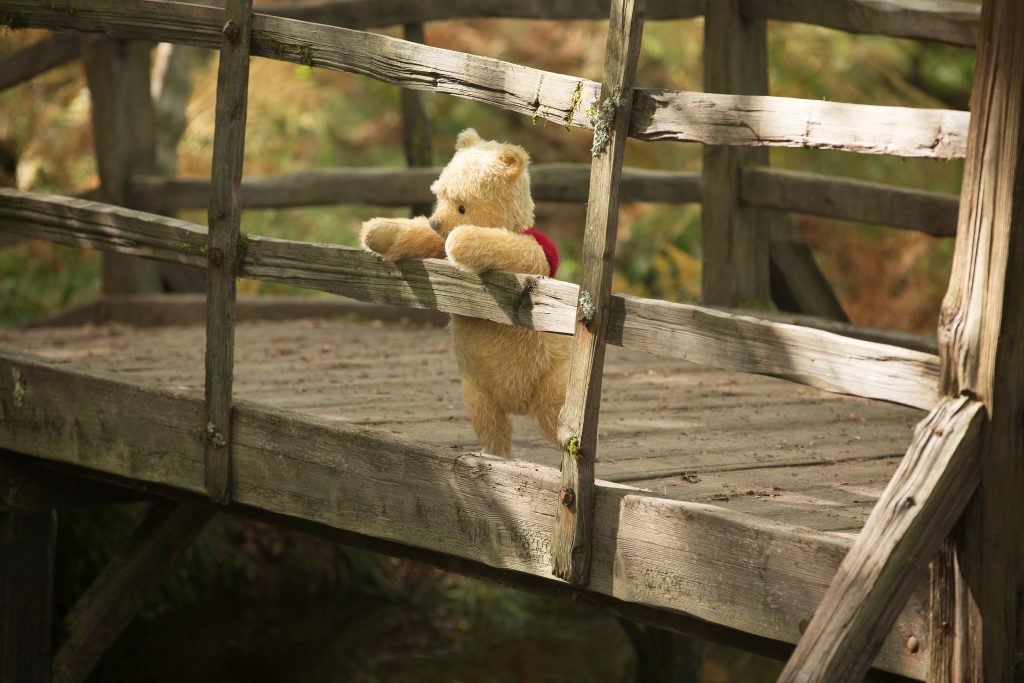 Many things happen on this bridge…I think spaces where transitions occur are always symbolic, although you can totally enjoy the movie without trying to delve into the “what does this really mean?” aspect of it all.

Let’s call them tidbits. I’ve given you the basic story line but if I tell you how everything works out, seeing Christopher Robin for yourself won’t be as special. But I can give you a few little glimpses and some parts of the movie that I loved the most:

Should you take your kids?

I say yes. There are times when the movie doesn’t move super fast and the plot focus is on the dialog and the dynamics of the relationships between the characters but I think children of all ages will be able to enjoy Christopher Robin in theaters without becoming too wiggly. 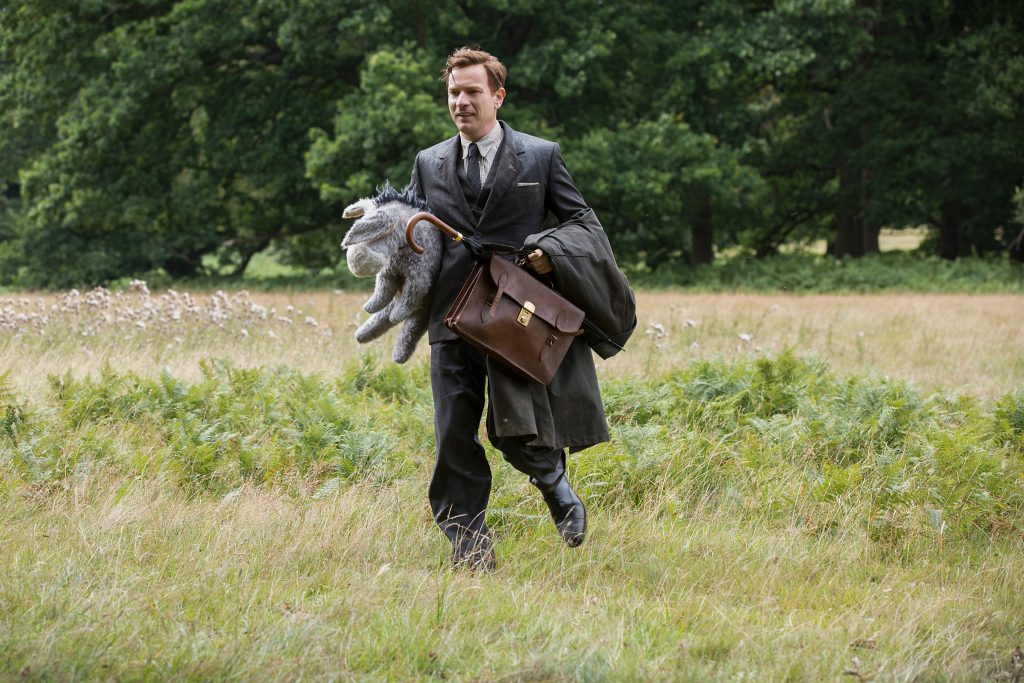 There is a fleeting war scene at the beginning with some loud shooting noises but it is over quickly. This is an “establish the story line” scene and the film quickly moves on from there. There’s also a scene where Christopher Robin is unconscious/dreaming that has some Heffalump imagery that some kids might find a little scary but again, the plot moves on and I don’t think it’s anything that would cause your kids to wind up in your bed because the memories of the movie are scary. They might wind up there for other reasons (I’m describing my life) but that’s another story entirely.

There is no bad language or violence. My two boys are eight but I’d have no qualms about letting a younger child see it.

I need to put down my phone and step away from my computer more. Isn’t it funny how a movie set in the forties gave me this? It was a message well-timed for me, even if it did make the realization that my priorities are sometimes out of whack a little uncomfortable to realize. I did leave the theater smiling with the seed planted in my mind that I need to be more mindful of my kids’ perspective. I might think nothing of brushing them off because I’m busy but the way they receive that…well, it isn’t nothing. “Be present” and “It’s okay to be childlike” were pretty substantial takeaways for me. 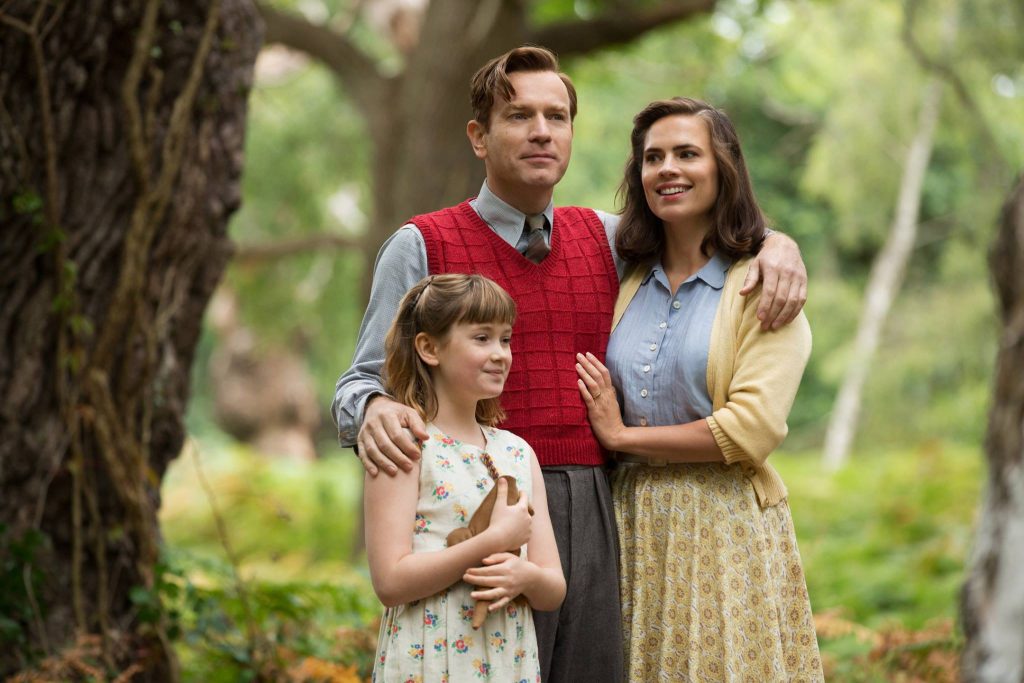 I’m curious to know what YOU will take from this adorable movie. Haven’t seen it yet? It’s in theaters now and such a great movie to end the summer with, so go get your tickets! 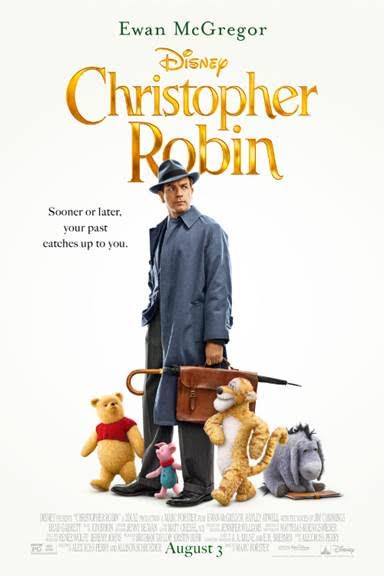 CHRISTOPHER ROBIN is NOW PLAYING in theatres everywhere! Stay tuned for more exclusive behind-the-scenes awesomeness that I got during my whirlwind three days in Los Angeles, to include my interviews with the cast. I can’t wait to share more of my experiences from the premiere of Disney’s Christopher Robin with you! To stay up-to-date, subscribe to the blog and follow #ChristopherRobinEvent on social media.

My interview with the man behind Christopher Robin, Ewan McGregor

Highlights Along the Way

« Marvel Universe Live! Age of Heroes is now in San Antonio and you must go
Audio Comfort – Interview with Jim Cummings, voice of Winnie the Pooh (and Tigger too!) #ChristopherRobinEvent »