When my husband and I first considered China adoption we were told we’d wait roughly six years for a child. It seemed our journey was over before it started, but our adoption agency suggested the special needs program (shorter wait). I had two things to say about that:

I was intimidated by “special needs.” Special needs were something you handled if those were the cards you were dealt. You know, the whole “God doesn’t give you anything you can’t handle” party line. I knew there were people who raised their hands to parent special needs kids…I didn’t think we were those people. But, before we ran screaming from the room, we took the time to learn what we were turning down.

The conditions listed under the umbrella of China special needs adoption program range from pretty much nothing, like a missing thumb to more complex conditions, like Spina Bifida. Families choose what medical needs they were comfortable parenting. We did research, took deep breaths and jumped in the deep end of special needs adoption.

It’s hard to get our heads around the fact that certain cultures classify minor imperfections as special needs. I don’t say that to spark a discussion on how lousy the Chinese are for this line of thinking, because I don’t see it like that. I tell you because it might change your thinking about whether a special needs adoption fits your family.

Early in our “paper pregnancy” we got a list of different needs and conditions. We had to check boxes to indicate if we’d be open to certain issues. Listed was “limb differences.” Having no clue what that meant I summoned my private physician, Dr. Google. I learned:

…congenital (born with) absence or malformation of limbs. May result from injury or disease requiring amputation. The causes of congenital limb differences are frequently unknown…

I thought “we could handle that” and checked the box. A few weeks later, I was staring at a picture of a seventeen month-old boy whose special need was “congenital hand abnormality.” I fell hard for this kid in the picture.

And here I am. So, what’s life with a limb difference kid like?

My son is four now. He’s missing his right hand (he has a stub and four finger nubs). “Get down!” and “don’t touch!” fly out of my mouth about sixty-trillion times a day. No different from any other mom of a small terror I mean boy, hmm?

My son is missing his right hand. “Get down” and “Don’t Touch” are things I say regularly.

He can climb a ladder, catch a ball, and open anything he’s generally not supposed to have. He can put the smack down on his brother, snatch toys from other kids and dangle them enticingly out of reach till the other kid cries (I’m so proud). He most recently got in trouble for swiping my Kindle, slathering it with body lotion and pretending it was a baby. I have used many adjectives to describe my boy terror (some have four letters). Handicapped was never one of those words.

My son is growing up adapting his environment to his anatomy. Buttons and shoelaces are challenging, but he’s mastered pushups at the tender age of four. I have zero doubts that my little fireball will conquer he sets his sights on.

The hardest thing about parenting a limb difference kid is managing my reactions to people’s stares or comments. Kids are curious. They want to look, ask “why” or want to know if “it’s an owie” (most adults can figure out it’s a congenital thing). Kids take my explanation of: “this is how he’s made” at face value and press on scaling the jungle gym or trying to take back whatever toy my little grabber just swiped from them (sigh, we’re working on that).

The hardest thing about parenting a limb difference kid is managing my reaction to the staring.

Occasionally, we’ll get rude or ignorant. A boy of about seven screamed “OMG did you SEE that kid’s hand” at a volume probably heard in the next county. A woman on the bus acted as if she’d seen Sasquatch and remarked audibly “how gross” to no one in particular. It’s hard to be chill and not give these people the verbal smack down (or trip them and pretend it’s an accident). Even though my instinct is to rush to my kid’s defense when someone says something tacky, I don’t do it. If I police every dumb comment, my little boy won’t learn his way in a world where people are sometimes just assholes.

People are going to notice his anatomy is a little different. He’ll have to learn his own way of handling comments, especially ugly ones. We all want life to be easy for our kids and sometimes it’s hard to see him standing out when he’d rather fit in. My son’s limb difference isn’t always the first thing people notice, but eventually, they notice. Reactions range from no reaction at all to friendly curiosity. Mean has been a rarity. I haven’t seen anyone tease him yet, but I’m sure that day will come, probably when I’m not there to witness it (kids are sneaky like that, ya know). 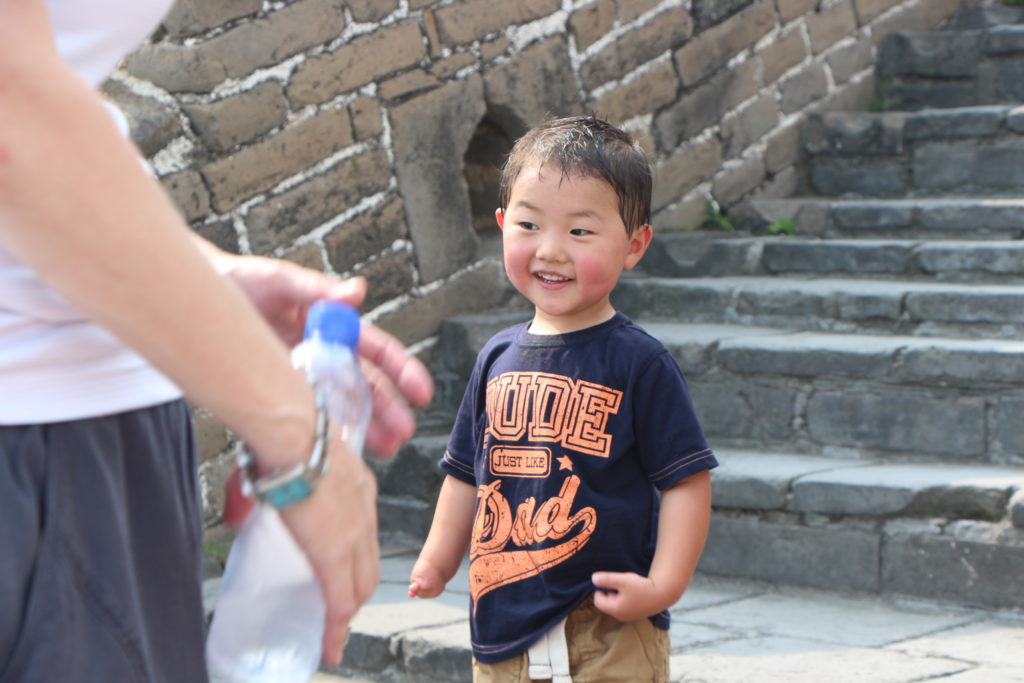 There is no “cure” for limb differences. Maybe someday there will be technology to grow a hand in a lab but we’re not there yet. I can’t name one thing he can’t do that would be enhanced by a prosthesis so we’re holding off until he’s older to decide on that. A cosmetic semi-functional “slip on hand” that looks and feels real (in kind of a scary way) will be an option when he’s bigger. We are leaving the decisions in his court.

He refers to his little hand as…well, his little hand. Right now, he’s happy to show you if you want to look. “It’s just my little hand” he’ll tell you and then moves on to telling you he likes your pretty dress and asking if you have candy in your purse. He’s kind of a player like that.

We sometimes call it his “lucky fin” like Nemo. This is how I sometimes explain his limb differences to children. I’m happy Disney came up with a more relatable limb difference role model because otherwise, we’d be stuck with Captain Hook and everyone thinks he’s sort of a douche.

PIN IT FOR LATER!