One of my sharpest memories of motherhood and adoption was the day I realized we were “those people.”

I have so many memories of being a mom. I kind of want to call them momaries but that sounds like mammaries and this isn’t a post about boobs. And why do we always have to feel like we should be making up new words, anyway? But, I digress. I digress a lot.

I have too many memories of being a mom to…well, remember. Sometimes snippets of times past will pop into the forefront of my mind as if they’ve been lurking in my subconscious and want to remind me “hey this happened in 2013.” Some of my motherhood moments are more vivid and I think about them almost daily:

The day I met each of my three kids, all under very different circumstances;

The day I cried, locked in the bathroom of a hotel room in China feeling overwhelmed and unprepared to be a mom;

The day my son Zack told me he wanted me to go and live in another family because I “always had a mad face;”

Wonderful moments. Ugly ones. Experiences I hope I never repeat.

First words, first days of school, first haircuts. Many firsts, the kinds of memories inherent to motherhood. Every mom has their own stories, scenes that play out in our brains during waking hours and at night when we’re drifting off.

One of my most vivid memories in parenting is the day we became “those people.”

It was the last day of August in 2012. My husband and I were boarding a plane from Taiyuan to Guangzhou, two cities in China most people probably never heard of. We were leaving our new son’s birth province and headed south, to the American Embassy. And, when I say new son, I mean really new. We’d been Zack’s parents for four days. 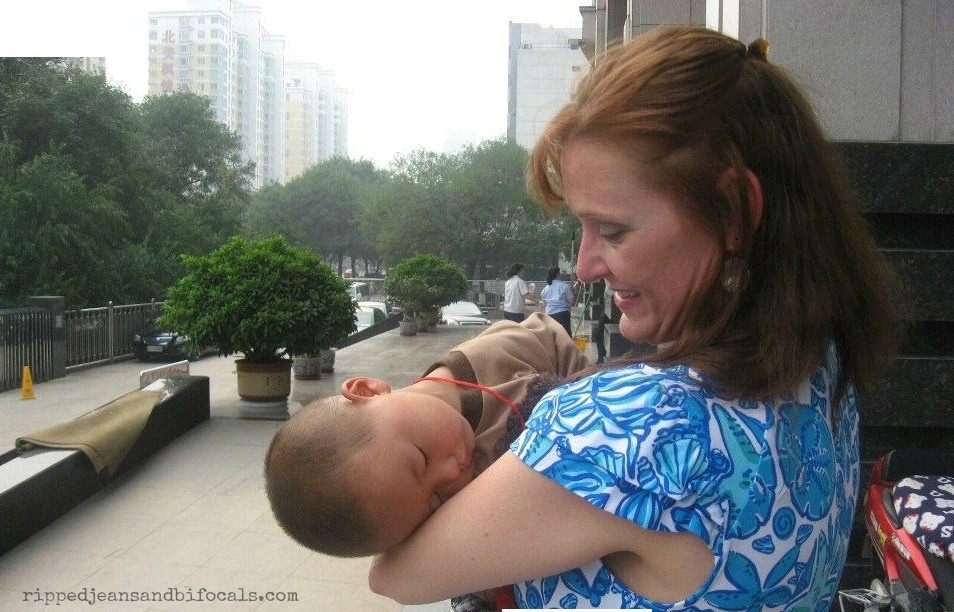 We’d just completed fifty zillion pieces of paperwork and stamped our fingerprints in red ink all over a bunch of documents that I was trusting to be paperwork that made this child ours in the eyes of the People’s Republic of China. Fifty zillion more pieces of paperwork awaited us in Guangzhou so Zack could become a U.S. citizen as soon as our plane landed in the U.S.

It was a weird trip. We were allowed to take him out of China but we hadn’t yet gone through the wickets we needed to take him home. Things were a still a little surreal.

But, I was happy. Smug, even. The adoption had gone smoothly. Bonding was going well with our two-year-old dude, although that probably had more to do with my endless supply of snacks and toys that made noise than mad parenting skills.

We made our way down the aisle toward our seats, a little unaccustomed to being weighed down with all of the kid paraphernalia. He was wearing khaki shorts and a lime green t-shirt, his “backup shirt” since the one I’d put on him that morning already bore some sort of stain. This was back when I thought my kid had to look like he belonged in an ad for Gap at all times. I know…that’s funny, right?

The plane was already half full. There’s none of that “families with small children may pre-board” nonsense happening on Chinese domestic flights. Or, possibly I missed it because the boarding announcements were in Mandarin. One of those things. The other passengers looked like business travelers. I could feel the stares as we trudged toward our seats.

I was used to the stares. I’d been carting this adorable Chinese child around a city where I’m pretty sure most people had never seen a white woman with red hair who towered above most of the locals at 5’11. These airplane stares were different. Some were anxious and tense. Some were borderline hostile.

I’m a pretty direct person but I was in a country where the culture is more restrained. I knew “Dude, what the hell is your deal?” probably wasn’t an appropriate response to the guy who was looking in our direction and scrunching up his face like he’d just discovered dog poop on his shoe.

Was it because we were Americans with a Chinese child? Was it because of my child’s limb difference? Did I accidentally smack someone on the head with the diaper bag? The answer to that last thing is probably yes…those airplane aisles are narrow, right? I averted my eyes followed my husband to our seats near the rear of the plane.

And then I got it. 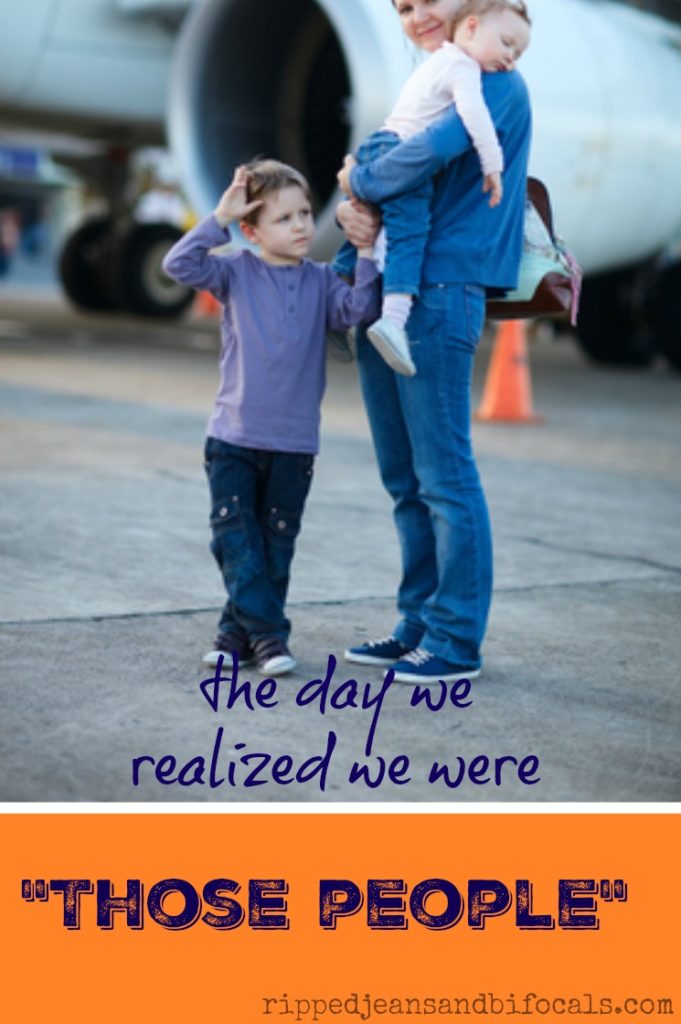 We were those people.

The moment in parenthood where you realize you’re “those people.” #AdoptionTalk

We were now those people. Beyond mild curiosity, this plane full of Chinese business travelers probably didn’t give two hoots about our adoption. They were just warily watching, hoping we’d pass them by, that our family wouldn’t slide into the seats behind them.

In a blink, I realized how much my life had profoundly changed and how much it would change over the coming months. I was prepared for adoption but I don’t think I was prepared for motherhood, if that makes any sense. I’d bought clothes and toys. I’d lined up babysitters for date night because things would still be normal. Stop laughing at me. I’d made doctor’s appointments and decorated his room with the very best Pottery Barn Kids had to offer.

But, until that moment, it didn’t hit me that people would see me in a different light because I was the mom of a young child. I’d been so focused on the adoption process and the stress over waiting that I found my re-entry into motherhood a little jarring (I have a biological daughter who is 18 years older than my youngest son, so my memories of being those people were very dim.)

I’ve had many moments where I looked back in hindsight, reflected on how life had changed but this sharp memory of standing in that airplane on an August morning almost four years ago is the only time when I’ve had such a moment of clarity.

Join the #AdoptionTalk linkup and tell your story #adoption

The change is now, I remember thinking. I was excited and a little scared. August 31st, 2012. The day my adoption journey merged into my motherhood journey.

It’s been quite a ride. You can check out my adoption archives for more stories of my crazy life or read more about me here. Or, come along for the rest of the ride with me. Follow along on Facebook and Pinterest and keep up with the crazy, the messy and the funny.
Follow Ripped Jeans and Bifocals’s board Adoption Ideas on Pinterest.

Today’s topic is Memories. Grab a button for your post and join Ashley, Erin, Jenni, Jill, Juliana, and me!

New to linking up? We’d love to have you join us, here’s how.