November means stuffing our faces with pumpkin pie and fake whipped cream. November means three a.m. bargain hunting on Black Friday (or doing the sensible thing and staying home and going your shopping on Amazon). November means leggings, sweaters and poking fun at the people who get all twitterpated over all the pumpkin spice things. But what does November have to do with nosy questions about adoption?

Well, November is also National Adoption Month. The fact that we celebrate children finding families and giving thanks in the same 30-day time period? Well, let’s just say that’s not lost on me.

How I really want to respond to nosy questions about adoption

Two of my kids are adopted. My brother and several of my cousins are adopted, too. Growing up, adoption was just a normal part of how you get kids. As an adoptive parent, I get asked all kinds of rude, nosy and sometimes really weird questions about adoption. I usually manage to answer semi-politely, although if I really want people to shut it and move on, I find that talking about hemorrhoids usually does the trick. It’s funny how people who ask questions about the intimate details surrounding how my family became a family are scared off by talking about bottom troubles but there you go.

How I WANT to respond to nosy adoption questions #adoption

But just for fun, here are some of the answers I wish I could give to people who ask nosy adoption questions.

1. Can’t you have any children of your own?

That’s a big no because I have no uterus and my Fallopian tubes are shriveled up. I had Endometriosis and it gave me raging awful periods, so I had some key girl parts removed. Shall I go on? I love conversations about my vagina and assorted lady parts. So fun.

Nosy questions about adoption are one thing but this gets a little personal, people.

2. One of THE WORST nosy questions about adoption: What happened to their real mom?

Gosh, I don’t know! These rude little humans woke me up at 5 a.m. asking me if I knew where the remote was. THEN they wanted me to make oatmeal. That seems pretty real to me. Is there someone else that should be handling these buttcrack of dawn requests? Oh, and say! Are those your REAL boobs? Just curious.

They were free, but let me tell you the shipping and handling was pretty freakin’ steep. Oh, and say! How much did you pay for that ostentatious gas-guzzling SUV? That’s not too personal, is it?

4. Do you know Angelina Jolie? (Probably one of my favorite questions about adoption we get asked TBH)

I totally do. Yesterday I was just saying: “Angie, we need to call Madge, put on our good yoga pants, jump in the minivan and head to Sonic for happy hour.” Of course I know famous people who have adopted. We all hang out drinking boxed wine and snarfing Velveeta cheese dip. Fun!

5. Why did you adopt from China instead of your own country?

I adopted from my own species. That’s something, right? And… When would be a good time to talk about your made in Indonesia shoes and your Japanese car, hmm? I’m just curious and all.

6. Now that you’ve adopted, do you think you’ll get pregnant?

Ooooh fun! We’re not done talking about my vagina yet? Just kidding. See #1.

Related post: Everything you need to know about post-adoption depression

7. Are you planning to tell them they’re adopted?

It depends on how smart they turn out to be. They may eventually figure out that two Caucasians don’t usually produce Asian kids, so if it seems like they’re going to be smart, we’ll have the adoption talk when they’re about 13 and really starting get going with that whole teen angst thing.

Now, I completely understand curiosity and that people have questions about adoption. But this one is just dumb.

And my personal favorite,

8. You’re a saint for giving those poor children a good home.

I work so hard to keep my home a kid-safe little haven of love and harmony. We’ve even moved the beers to the lower shelf of the fridge so the kids don’t need to use the step stool when I tell them mommy needs a cold one. 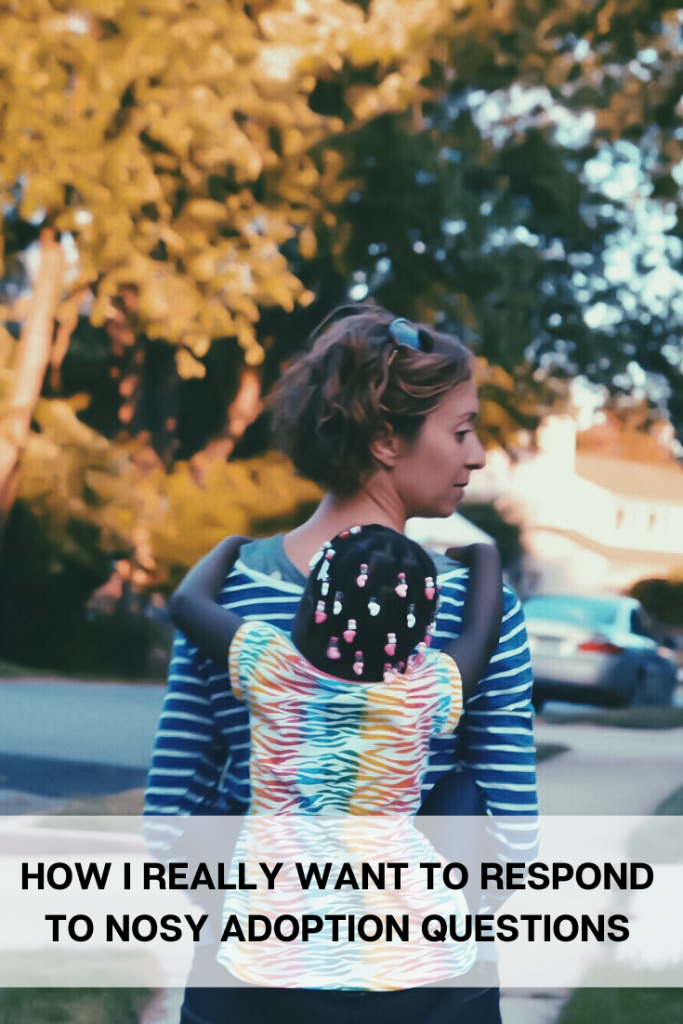 A version of this post originally appeared on Scary Mommy.

« How to make your own taco seasoning
Buffalo Chicken Quesadillas »

This little guy wasn’t a keeper - a fish has to