If you meet me for the first time, your initial assessment might include words and phrases such as “uptight” or “resting bitch face.” You probably wouldn’t guess that inside me lives the sense of humor of a 12-year-old boy. Now you know, so it probably doesn’t come as a surprise that when I had the opportunity to explore Uranus Missouri, I jumped all over it. If you didn’t know such a place existed, buckle up and settle in for all the information you didn’t know you needed. I hope you enjoy this newbie’s guide to Uranus Missouri. 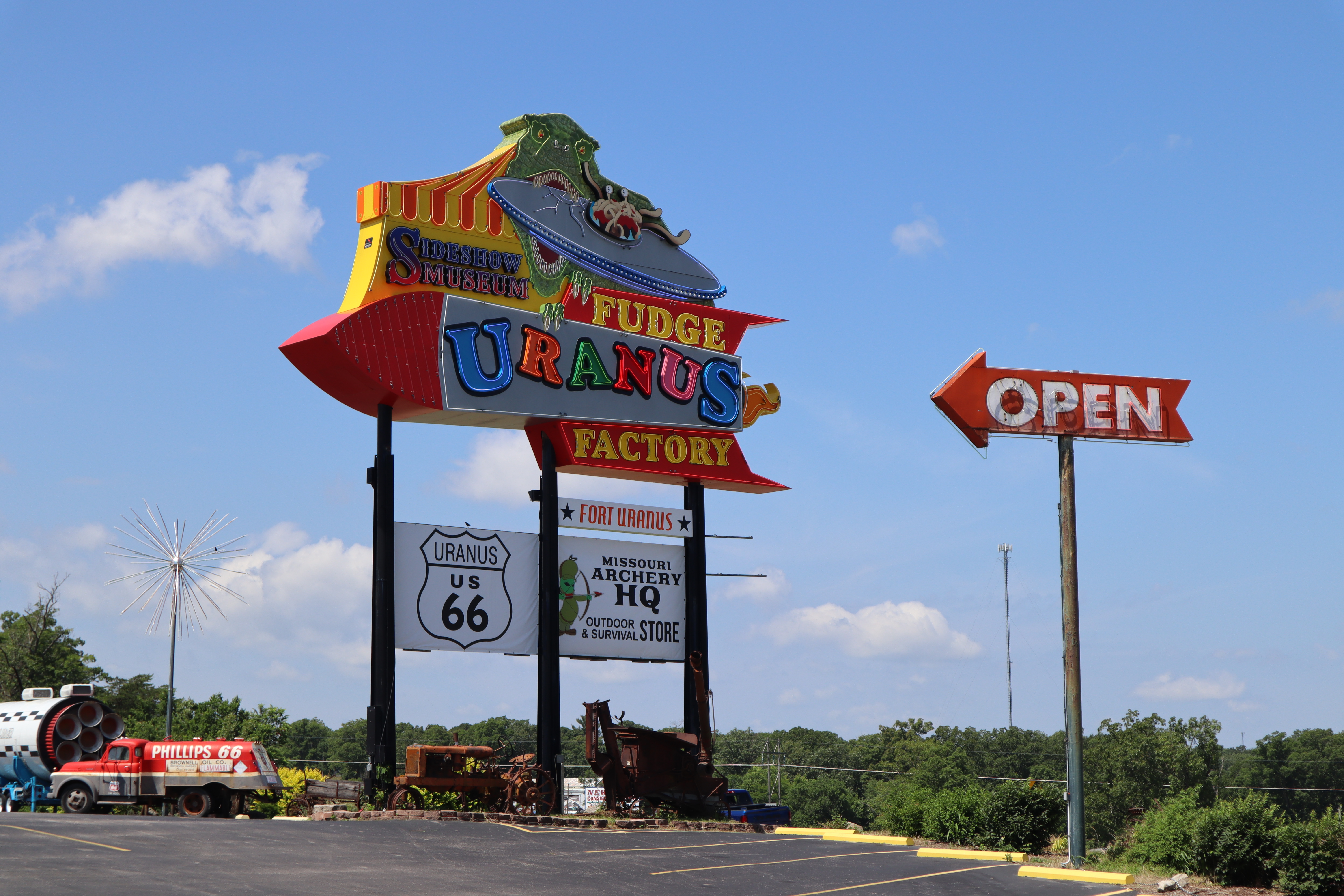 I first became aware of Uranus during a press trip to Branson. Some of my fellow writers had driven past signs advertising Uranus Missouri and joked about it during our entire three day trip. The jokes were both terrible and hilarious in a way that only jokes about Uranus can be.

My family and I were driving through Missouri last week to attend Camp No Limits with my son Zack. Camp No Limits Missouri is located at a YMCA property in the Mark Twain National Forrest between Steeleville and Pitosi. I’d never been to this part of Missouri before and if you get a chance to see it, go. It’s beautiful in the summer and the 1000 percent humidity we “enjoy” in San Antonio is absent. 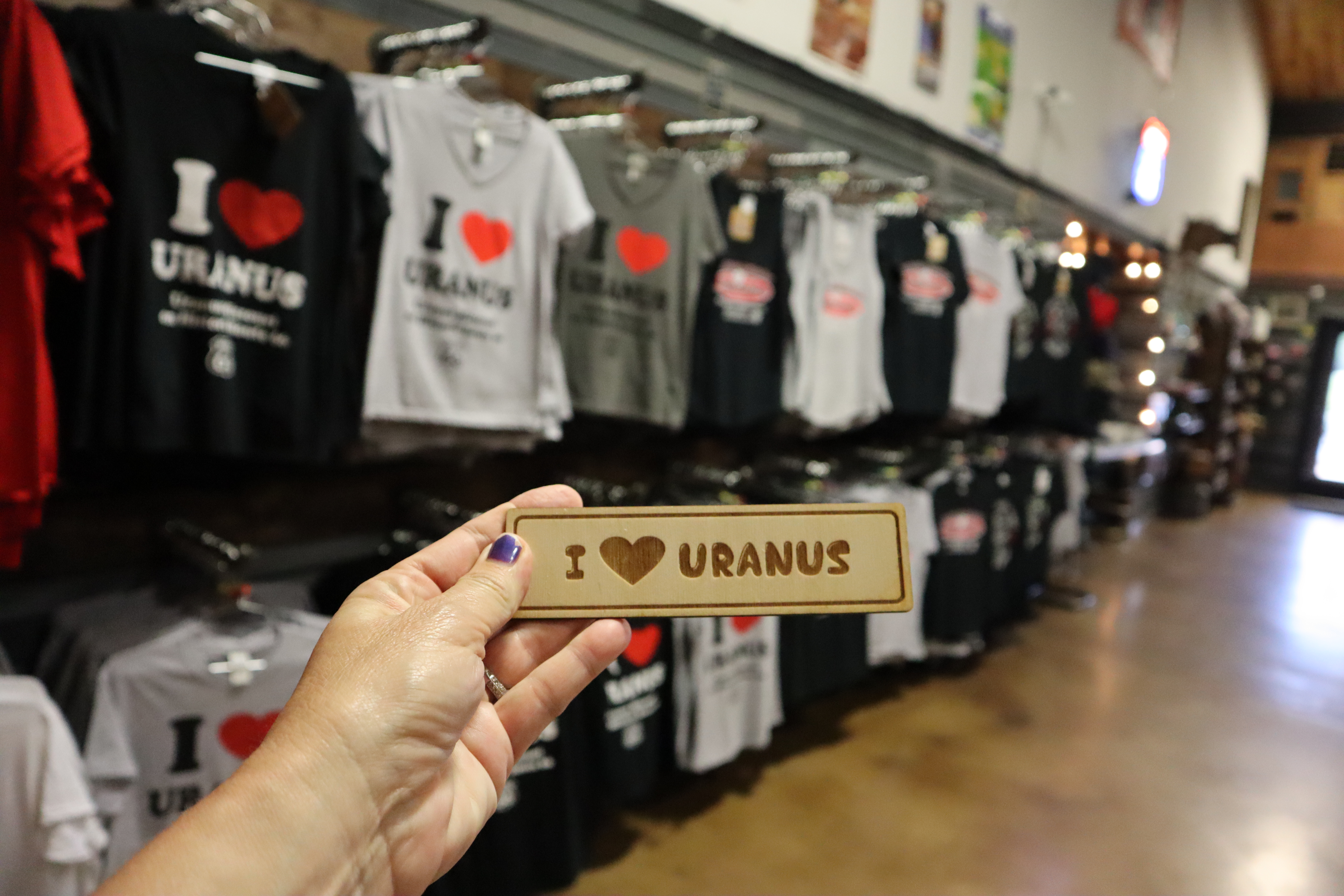 Now everyone who sees my fridge will know how I feel about Uranus.

We saw the signs for Uranus as we approached the city of Rolla, where we’d planned a pit stop. When I realized we’d be driving right by Uranus, I told my husband there would be no question about stopping. The Uranus jokes commenced. Terrible and hilarious in a way that only jokes about Uranus can be. 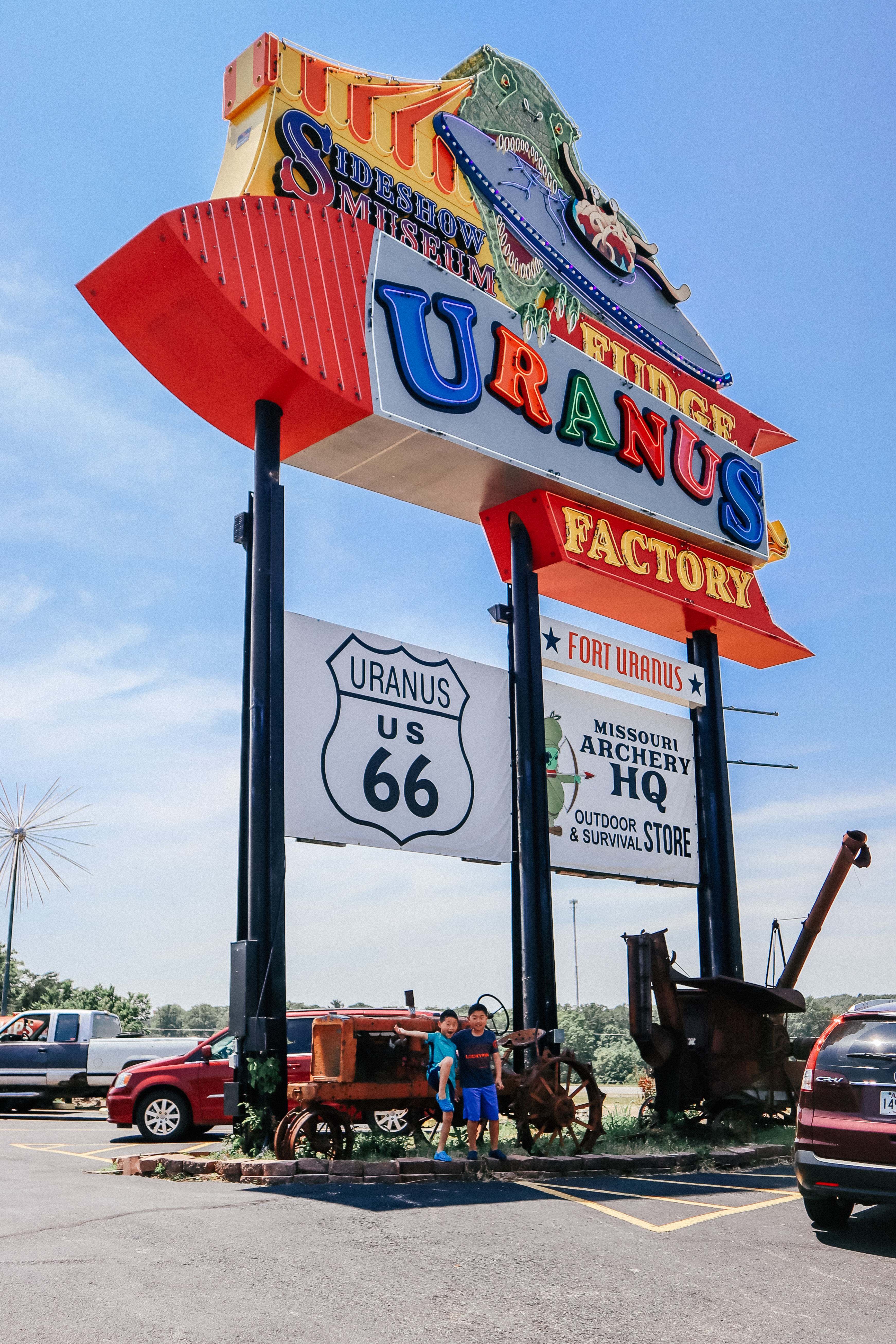 Uranus is located along I-44, which used to be the historic Route 66.

I mean…if you don’t know where Uranus is by now, I’m not sure there’s much hope for you. Okay fine, you got me. I’ll tell you.

Uranus Missouri isn’t actually a real town. It’s a pit stop along I-44 right outside of Fort Leonard Wood. You’ll take exit 163. You absolutely cannot miss it. Uranus can be easily seen from the highway. It’s not super big but it’s big enough to where you’re going to take notice of it.

What is there to do in Uranus?

A half hour’s pit stop is probably enough time to see the sights and take your pictures. This should go without saying but pictures or it didn’t happen. You can also explore the Fudge Factory, which is also a little store. In addition to several varieties of delicious fudge there’s also merchandise, snacks, and restrooms. The employees will greet you with a hearty “Welcome to Uranus” when you come in and send you off with a “Thanks for picking Uranus” when you leave. 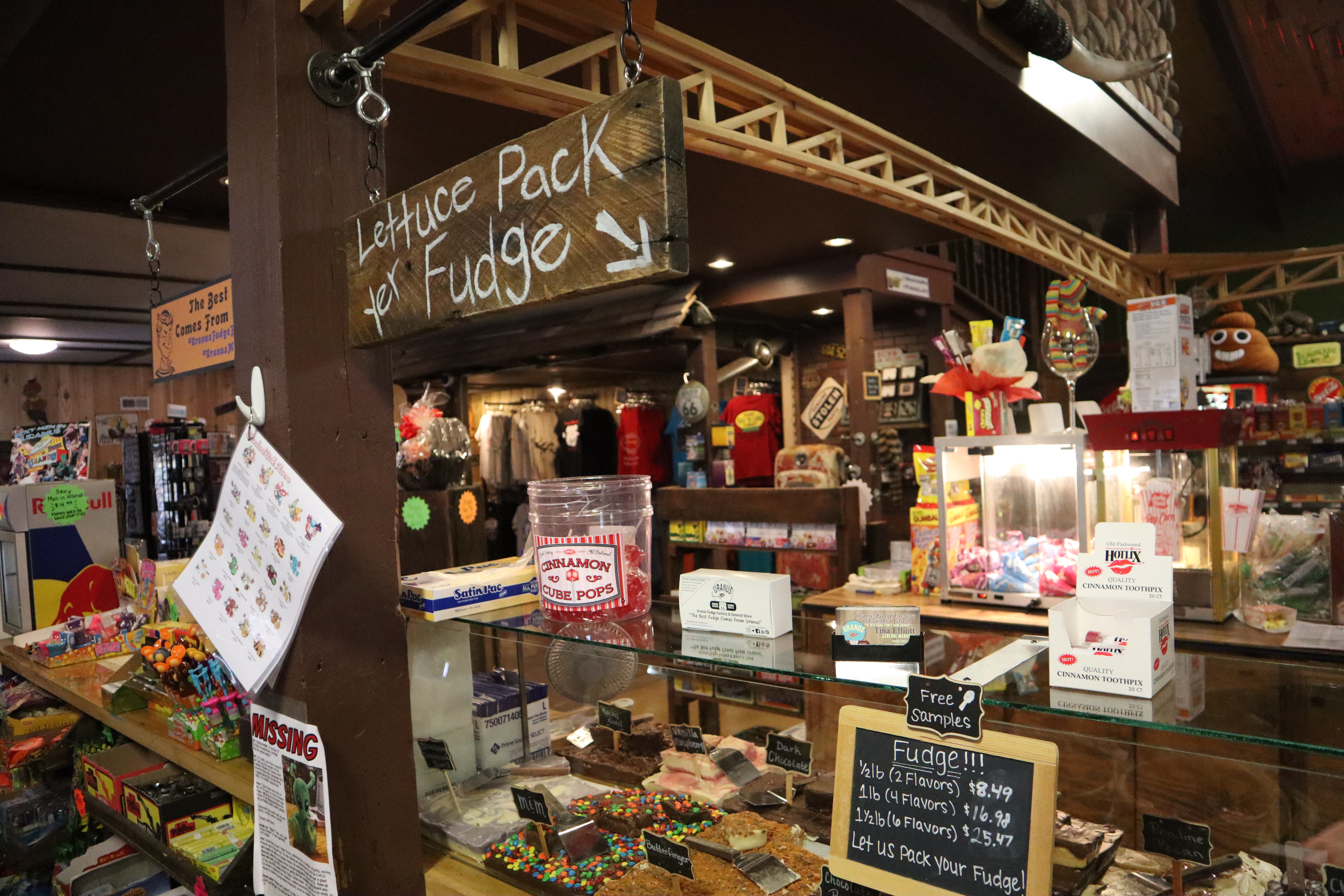 The fudge really is very good. They have some low sugar options that are sweet but not too sweet.

If you want to stay longer, there’s a sideshow museum, an escape room named “Escape from Uranus”, and an outdoor outfitters complete with an indoor shooting range. So…if you’re looking to stock up on ammo along I-44, this is your place.

With the exception of the fudge factory, we didn’t go in any of the other stores or attractions but if you’ve got a little bit of time to kill and escape rooms and/or ammo are your thing, go crazy.

Food and beverage options in Uranus

In addition to the Fudge Factory, there’s also a restaurant called Chicken Bones Party Bar and Grill. It’s open from 4:00 p.m. until midnight Sunday through Thursday and until 1:30 a.m. Fridays and Saturdays. I’m very curious at what kind of late night action one might find in Uranus. The menu consists of tacos, wings, burgers, loaded cheesy fries. You know…all food groups. 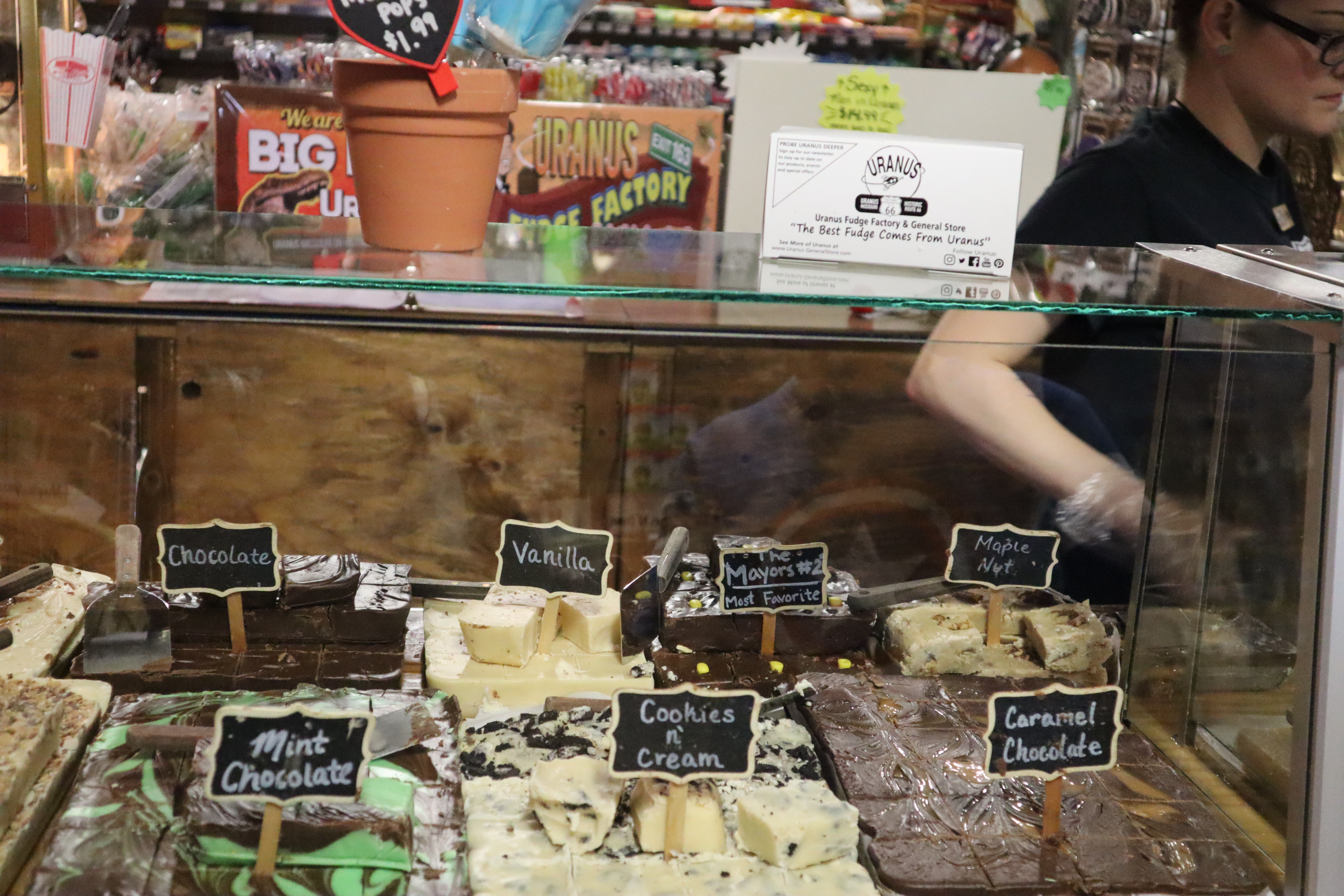 Do you really want to miss taking this gift box home? My husband bought some fudge to take to work for a joke but it really is good fudge. Maybe the best fudge really does come from Uranus. Bahaha.

No guide to Uranus Missouri would be complete with out a list of where to take the best pictures. I’m all about the best picture spots, so in addition to the ones I’ve shown you already, here are a few other shots you might want to get: 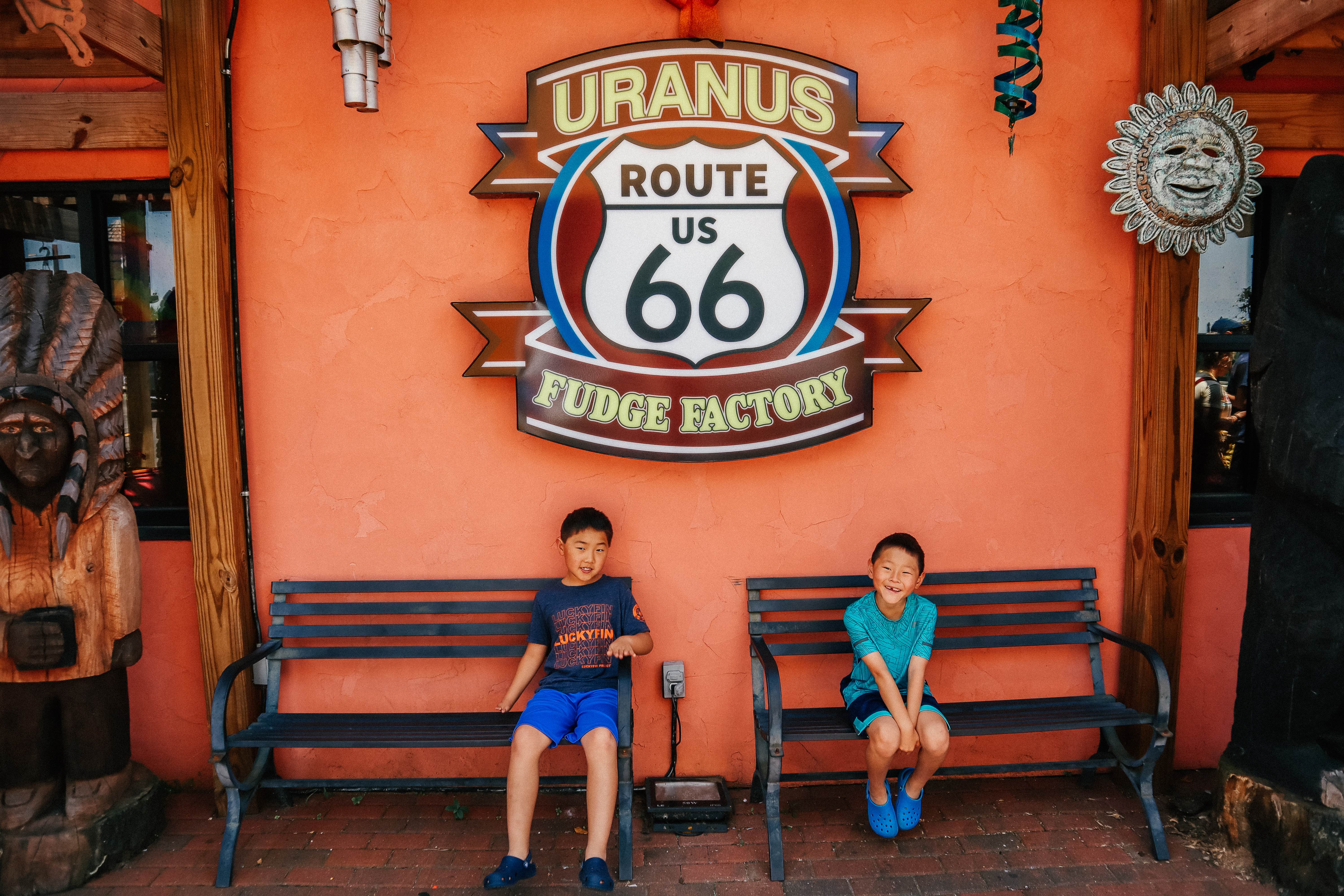 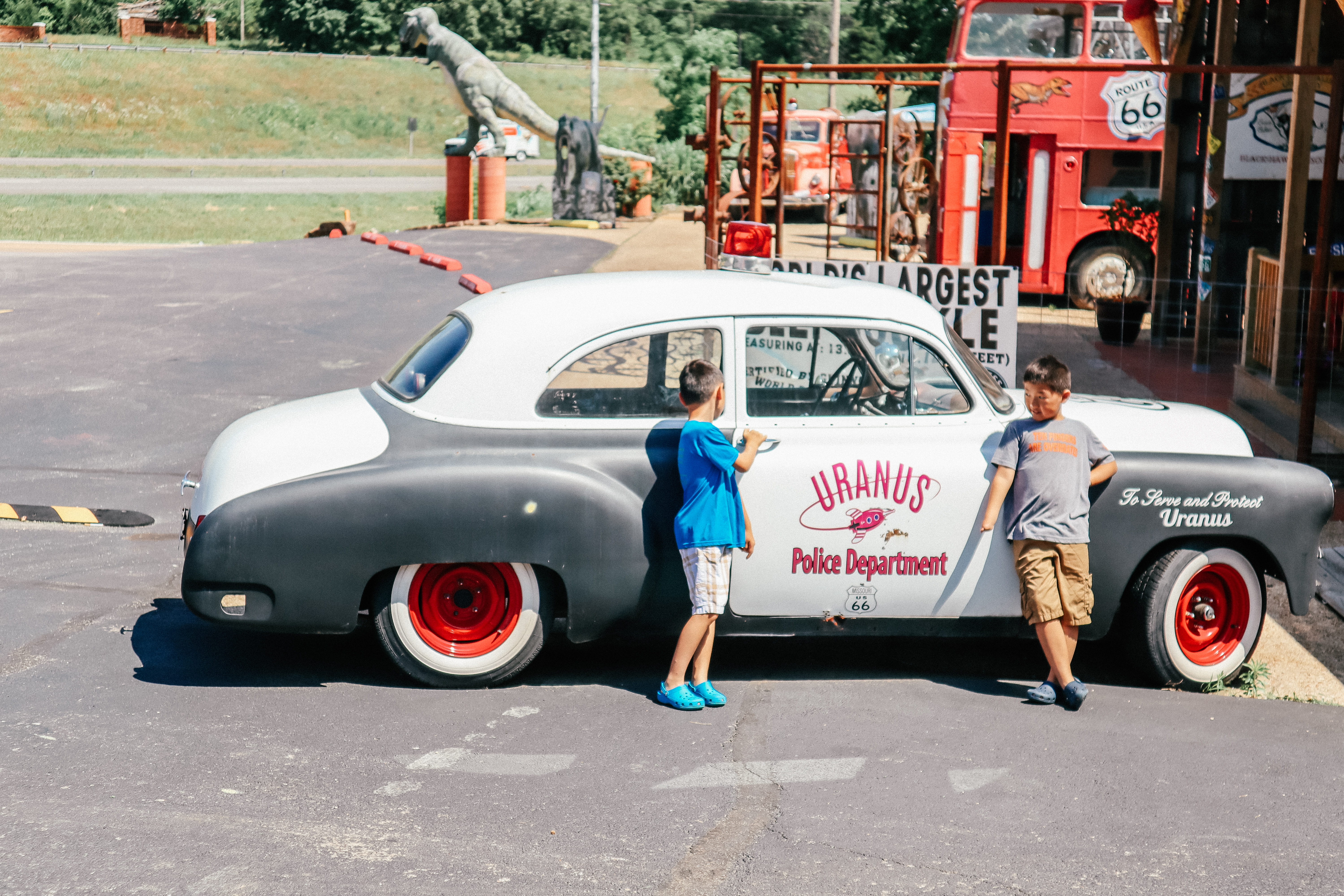 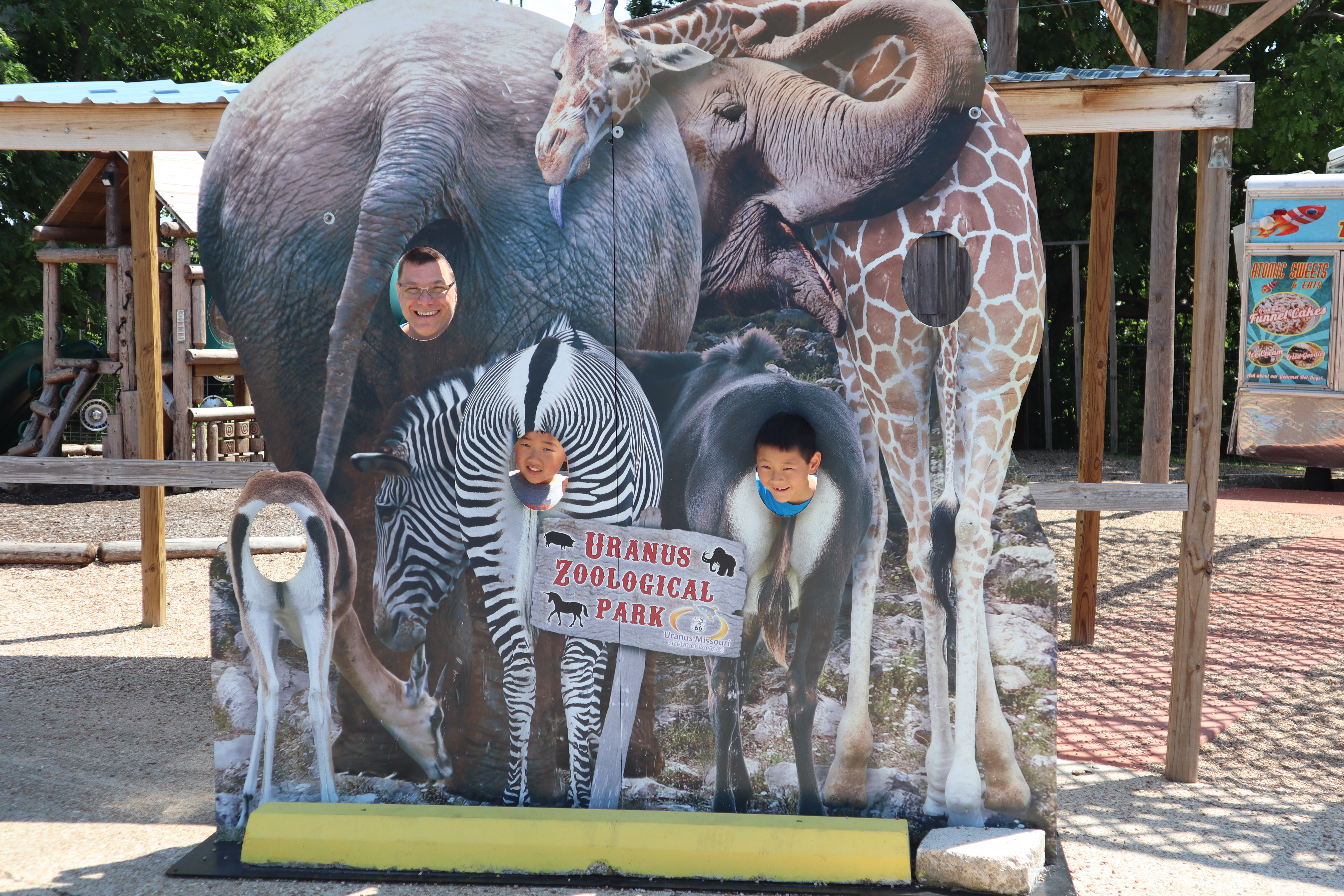 Here’s one for the Christmas card. There really isn’t a Zoological Park but that is probably unimportant. 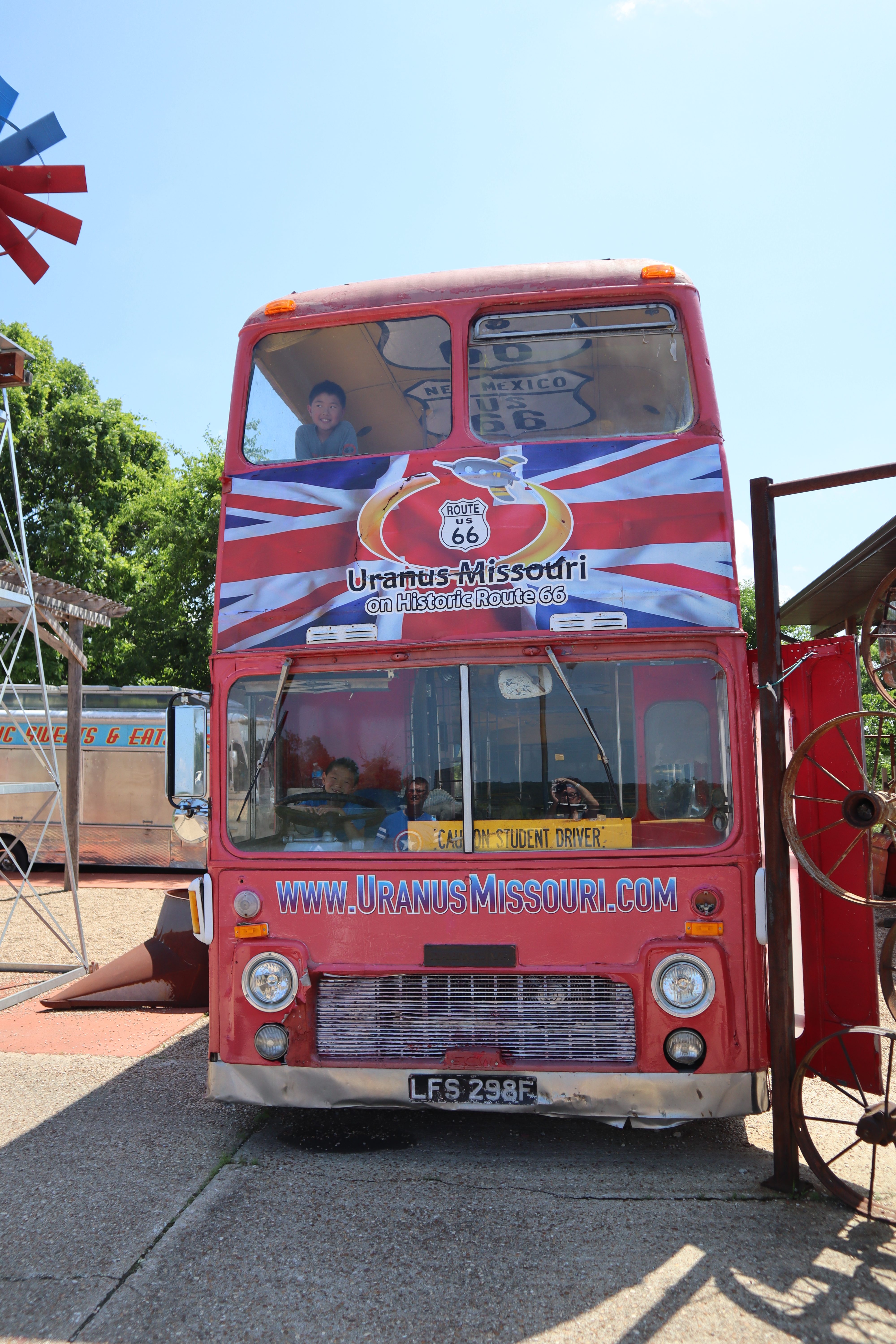 Too cute to pass up, right?

In addition to the photo opps I’ve shown you there are also some static dinosaur statues. You might have noticed them in the background of some of the pictures. I don’t get the “dinosaurs in Uranus” connection slash joke and our time was fairly limited so we didn’t get closer up pictures. I always have some form of shoulda coulda woulda after a trip and I guess the dinos are mine.

By the way, my kids now get the joke

They didn’t before we visited. My husband and I were cracking each other up (get it – cracking) with Uranus jokes out the wazoo (he he) and our two boys were utterly lost. 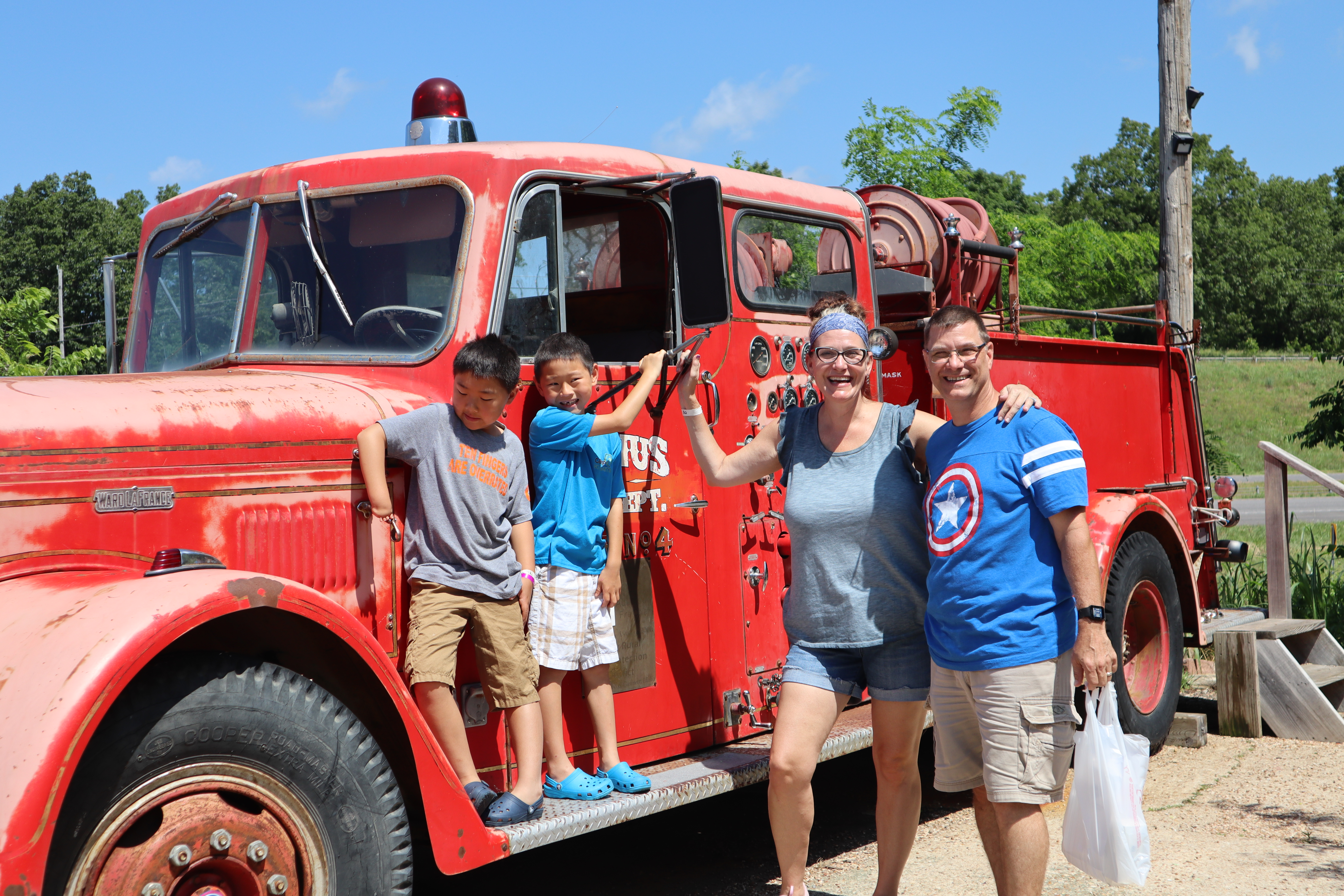 And of course, there’s a Uranus Fire Department. For some unknown reason, it has Idaho plates.

Them: “What’s so funny about Uranus?”

Me: “I’ll tell you after camp.” In my defense, we were on our way to spend three days with people we’d never met before. I didn’t want to be that mom who was responsible for the barrage of butt jokes at camp. We’d gone about a mile past Uranus and one of my kids said this:

“I don’t know why you’re keeping Uranus a secret.”

So, I told them. As you can imagine, the Uranus jokes have been abundant in our household ever since.

And, I’m okay with that, even when I pretend I am not.

Is Uranus worth a special trip? Probably not but do yourself a favor and don’t miss it if you’re driving by. In my opinion, it would be worth going a little out of the way to see. We’d stop here again. The fudge is really good. I’m a real sucker for sweets. And, as my youngest says “I can’t want to go back again and see how Uranus changes over time.”

There’s snacks. Clean restrooms. A well-maintained playground. An opportunity to stretch your legs and entertain your inner 12-year-old. I hope my guide to Uranus Missouri has motivated you to make this a pit stop on your next road trip through Missouri.

For more information on Uranus, visit this link. 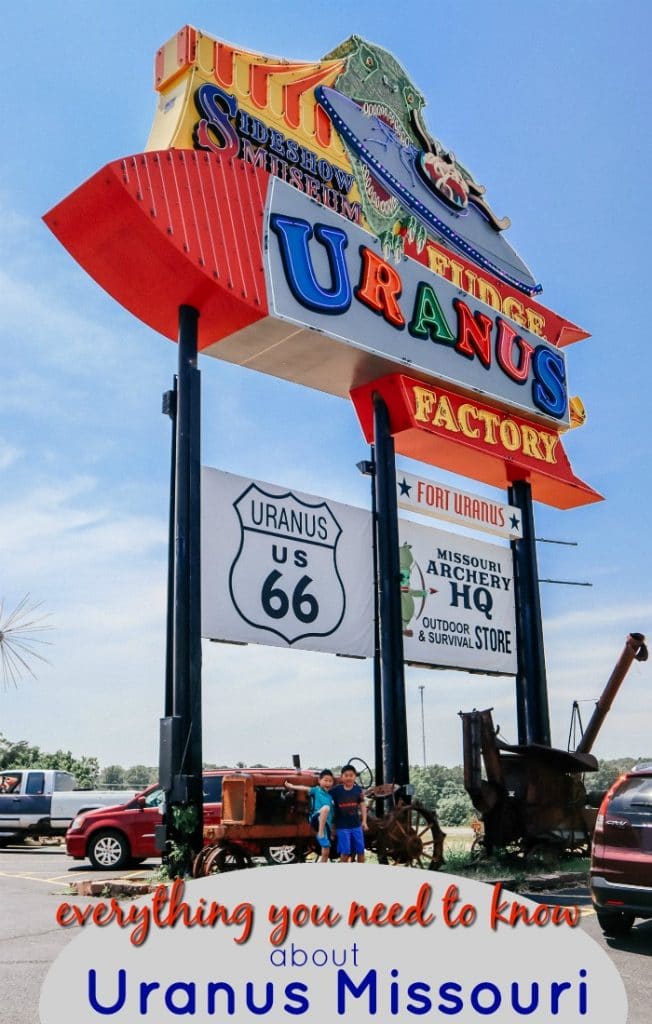 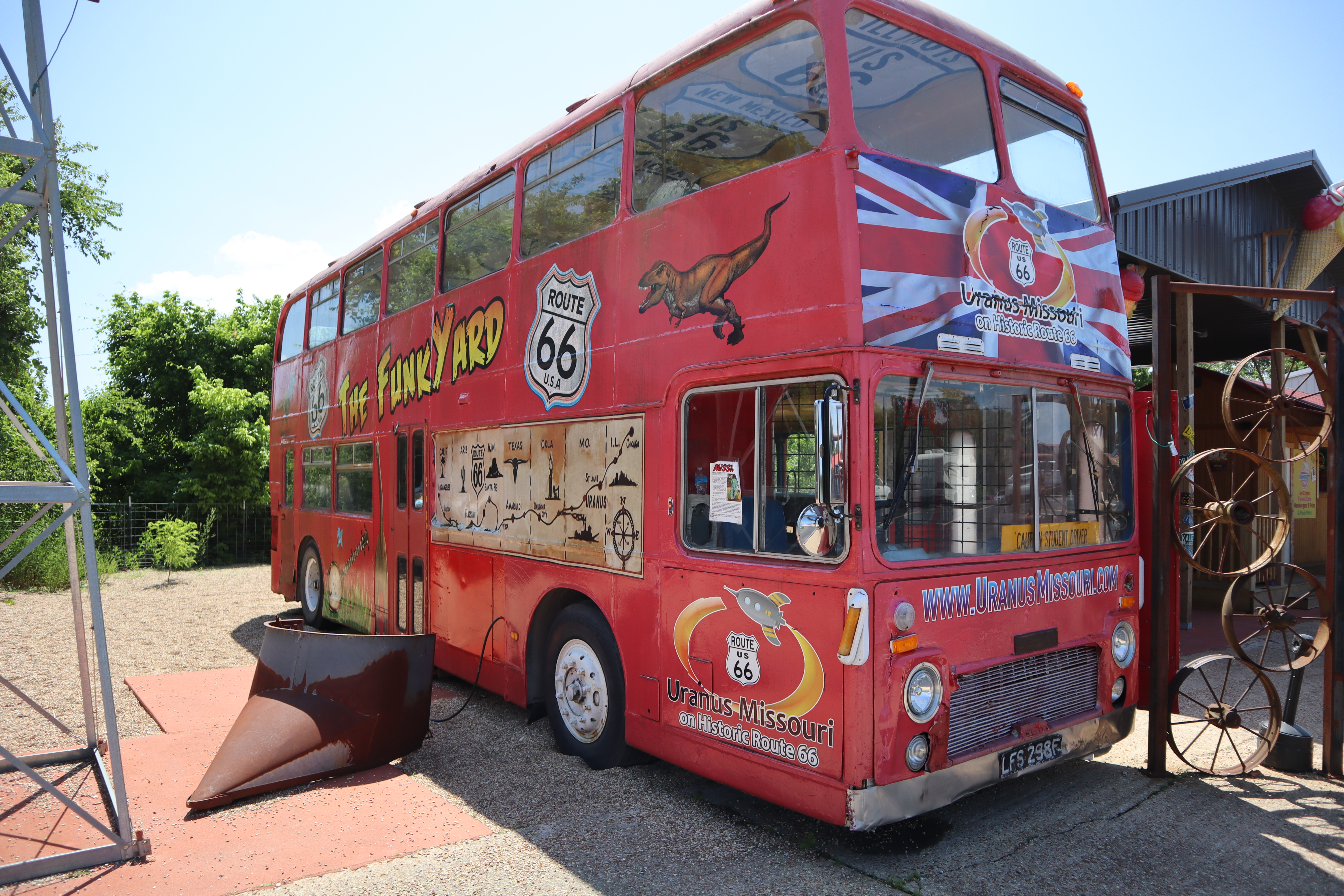