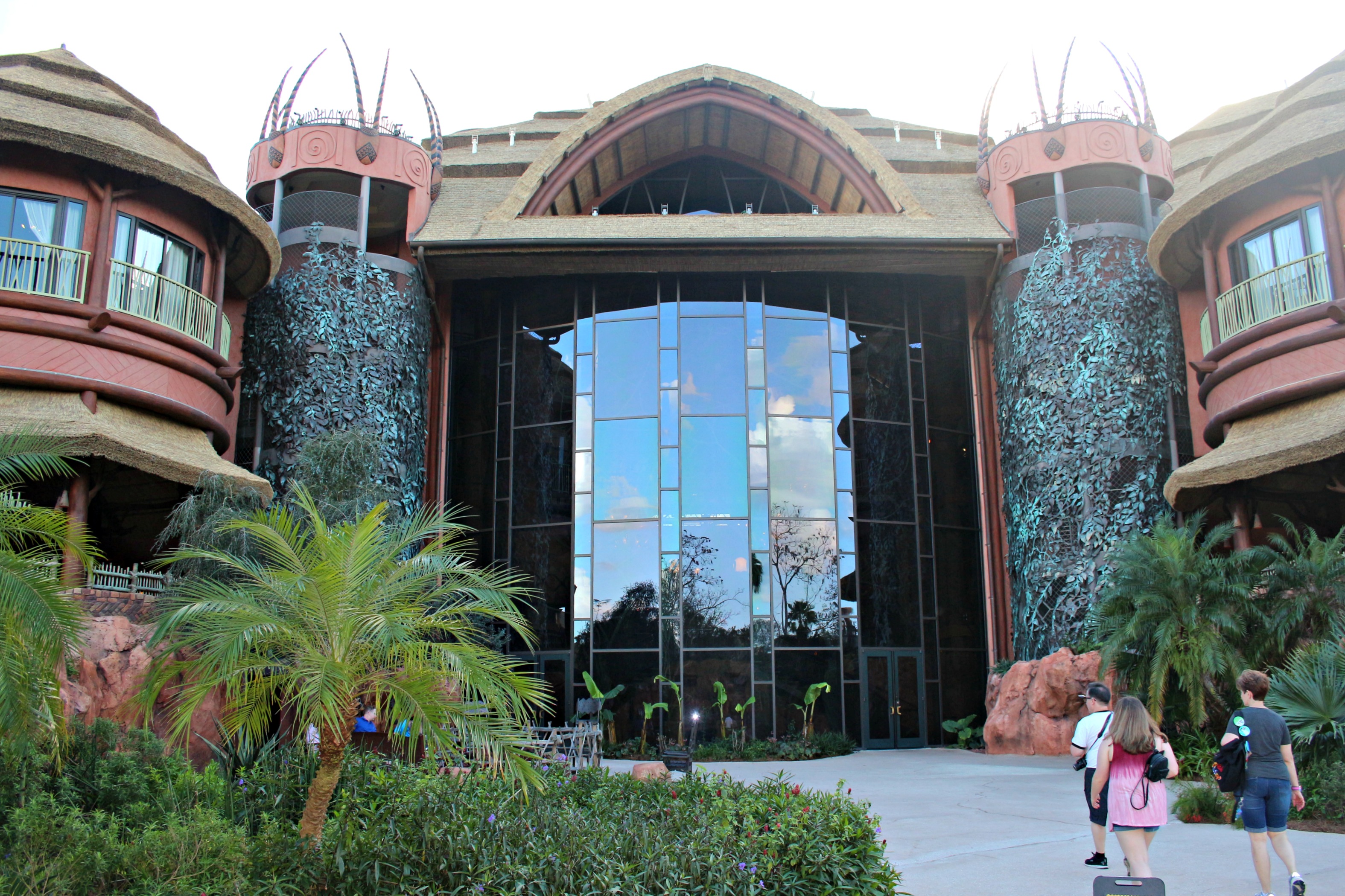 I had the opportunity to stay in a Deluxe Grand Villa at Disney’s Animal Kingdom Lodge and the experience was spectacular. The theming as soon as you walk into the lobby is exquisite and really makes you feel like you’re someplace exotic instead of in central Florida! 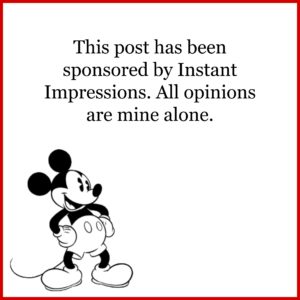 First of all, what is a Deluxe Villa?

Disney offers Deluxe Villas for travelers who need extra space and the comforts of home when they’re traveling. Think room to spread out, full kitchens and washer-dryers. Deluxe Villas can be a studio, one-bedroom or two-bedroom. Some properties have the granddaddy of all Deluxe Villas, the Deluxe Grand Villa, which is where we stayed at Disney’s Animal Kingdom Lodge.

The studios do not have full kitchens but kitchenettes (fridge, bar sink, and coffee maker) and do not have an in-room washer and dryer. You do have access to a washer dryer on site, though. 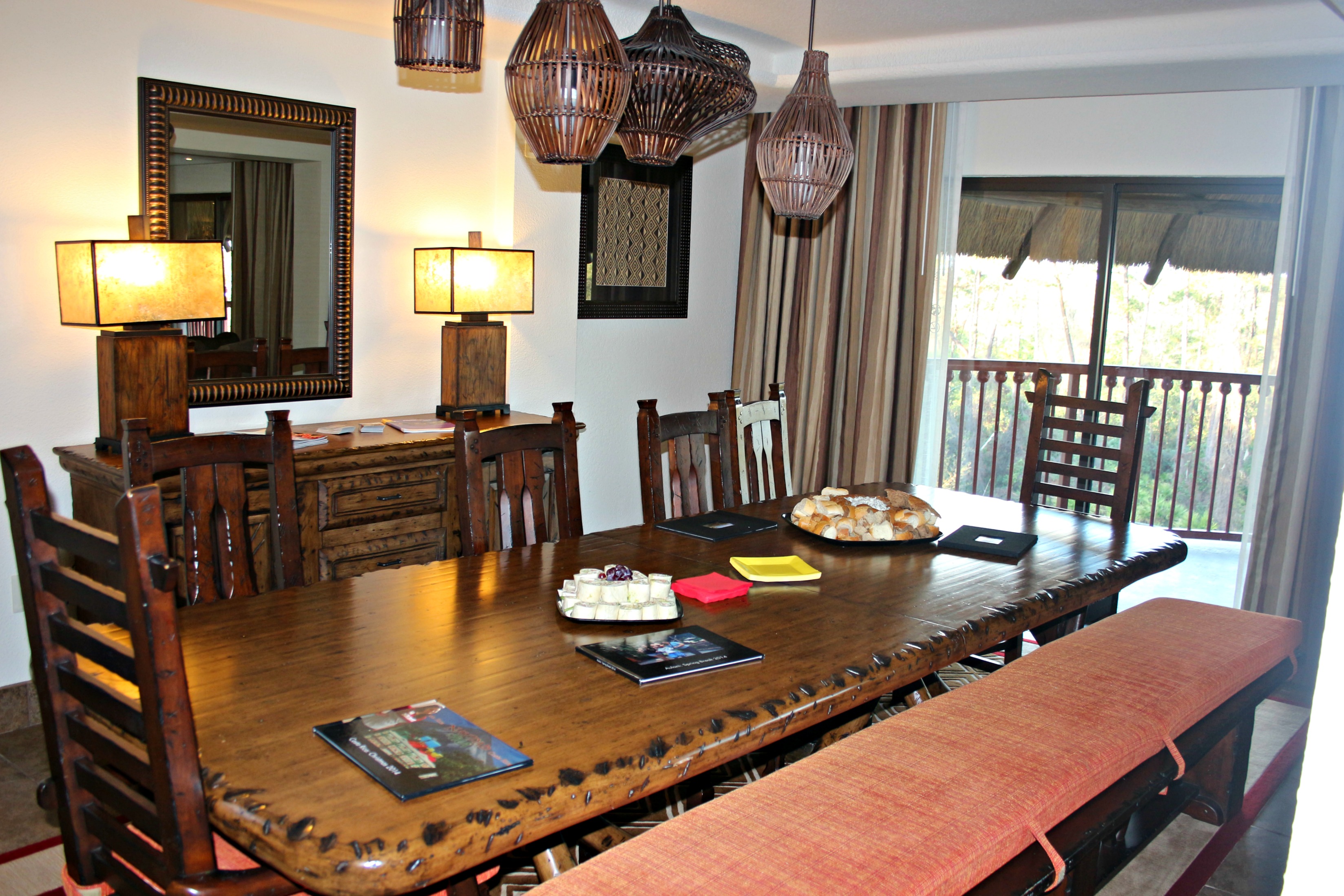 You can use this amazing space to have a quick breakfast before hitting the parks, to play cards after the kids have gone to sleep and more. Endless possibilities in the Deluxe Village at Disney’s Animal Kingdom Lodge

You can sit out here in the morning and watch the sun come up with a cup of coffee, which is what we did. You could also relax in this space at the end of the day with a nice glass of wine. The view is breathtaking, and, although I am proud of how these pictures turned out, they don’t do the view justice. 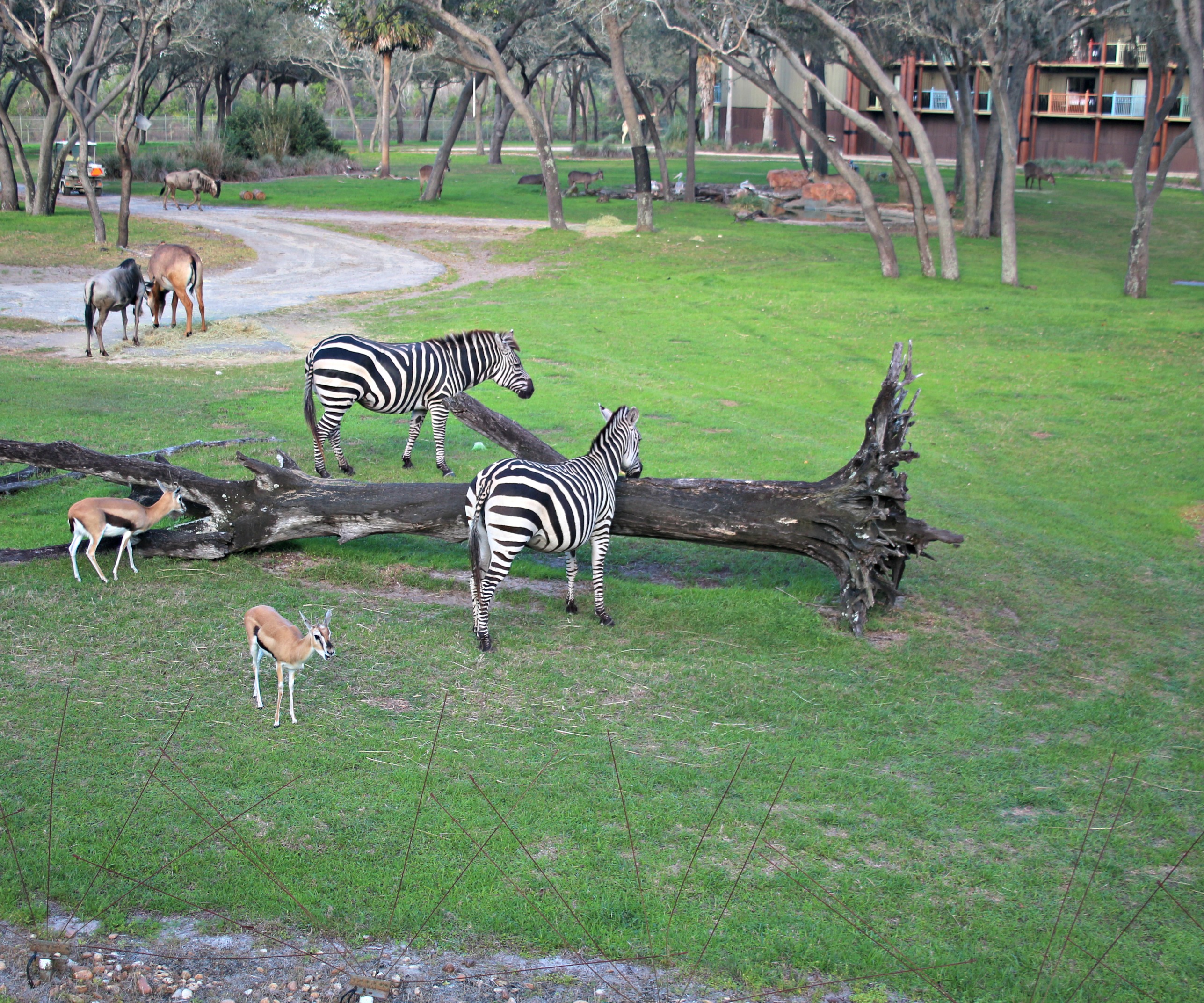 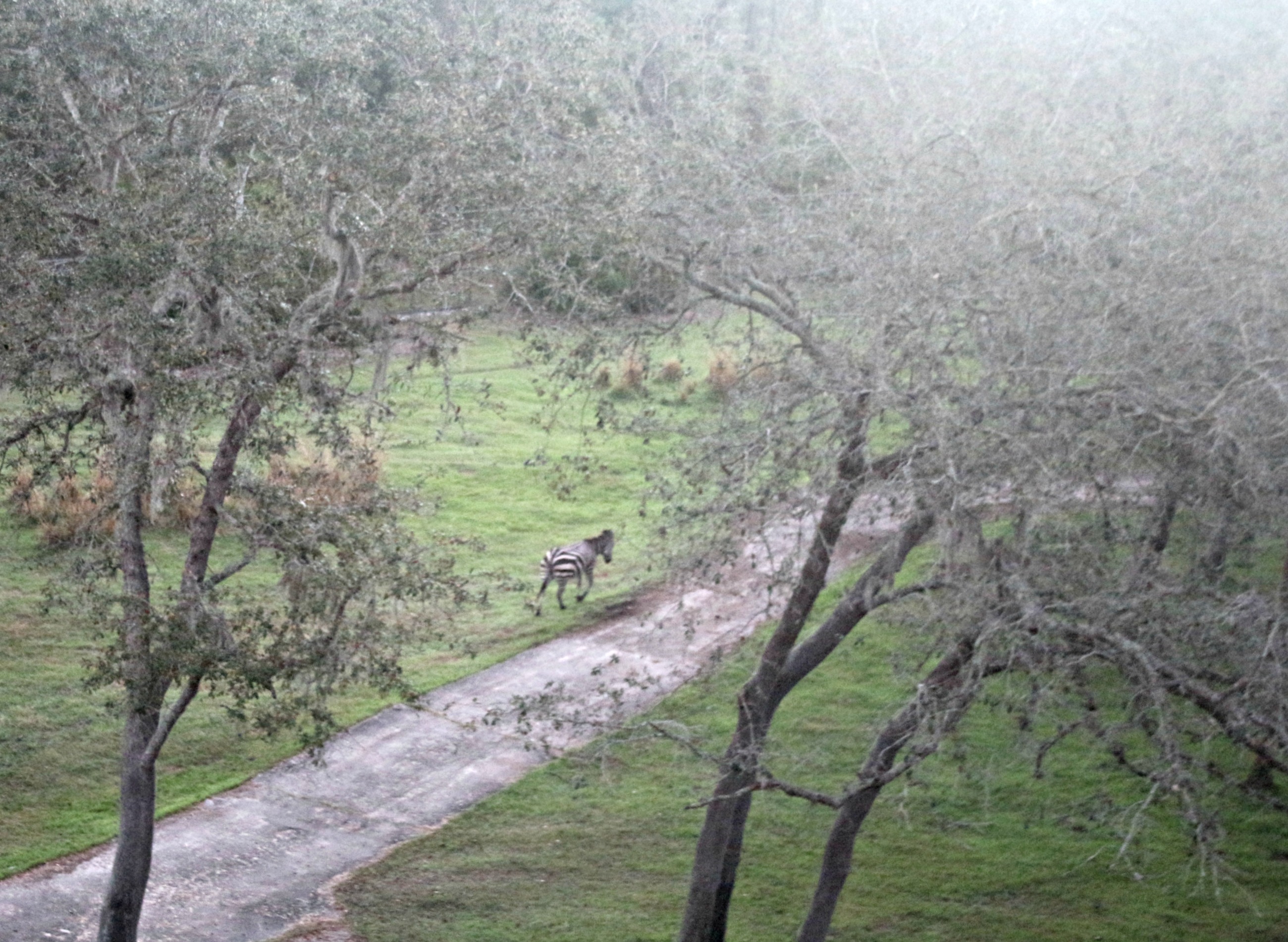 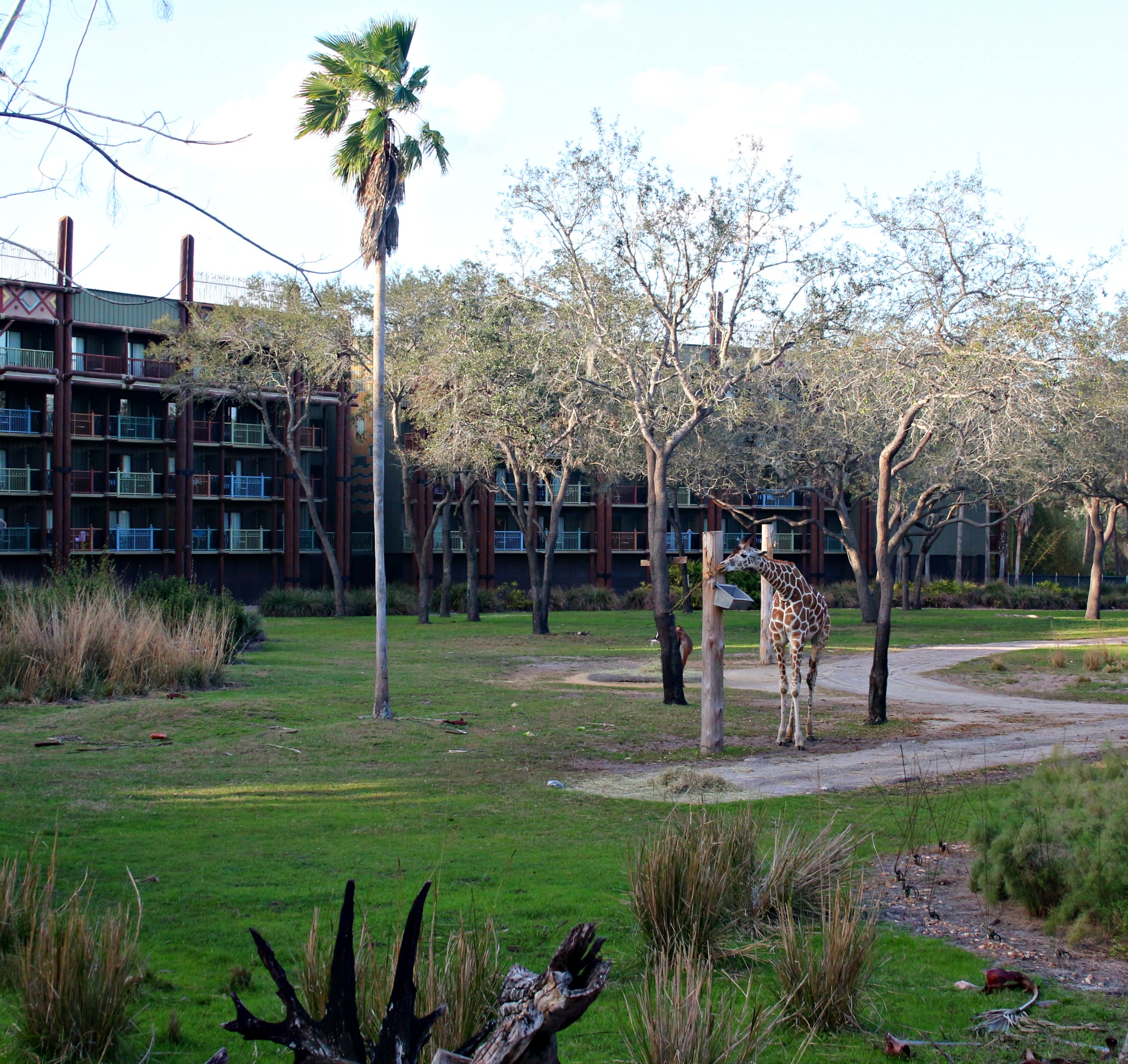 You don’t have to stay in a Deluxe Grand Villa to get a savanna view, and if you’re staying at Disney’s Animal Kingdom Lodge, I highly recommend splurging for a room with a savanna view. You do have plenty of opportunities to see the animals from other areas of Disney’s Animal Kingdom Lodge but there is just something spectacular about getting to enjoy this view from your room.

The master bedroom, complete with King-sized bed, was on one end of the villa. The kitchen and living areas divided the master bedroom from the other two bedrooms. There was a door that separated the two smaller (and I hesitate to use the word smaller because they were still pretty roomy) bedrooms from the rest of the unit. 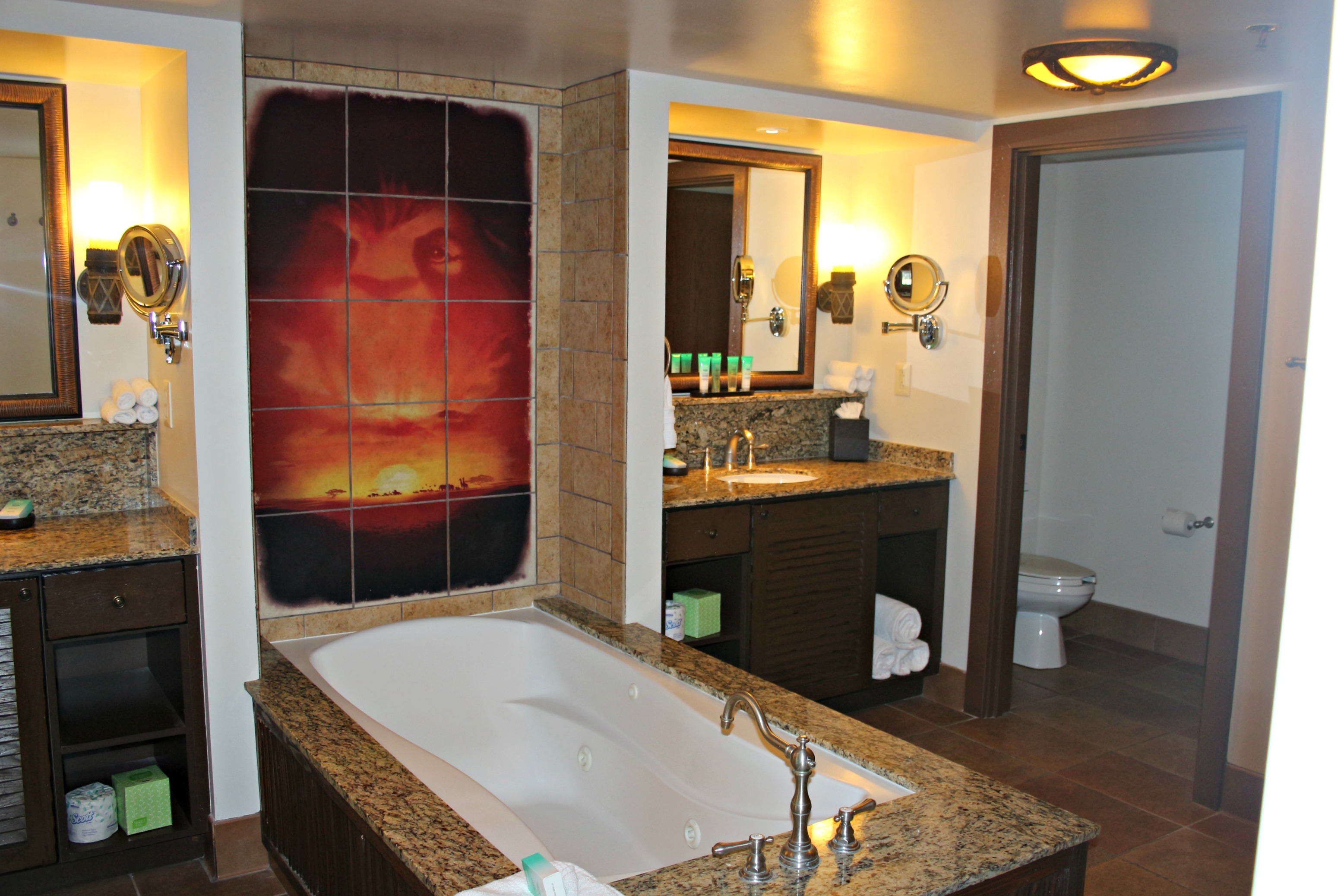 If you don’t want to look at this gorgeous mural while you soak, there’s a flat screen TV mounted on the opposite wall…just spin around.

This set up is perfect for a large family or a multi-family vacation. Adults can easily hang out in the living room after the kids are down for the night. Also, teens can stay up late and enjoy the game room after the adults have gone to bed. This space allows everyone to do their thing in comfort. There is so much room to spread out. 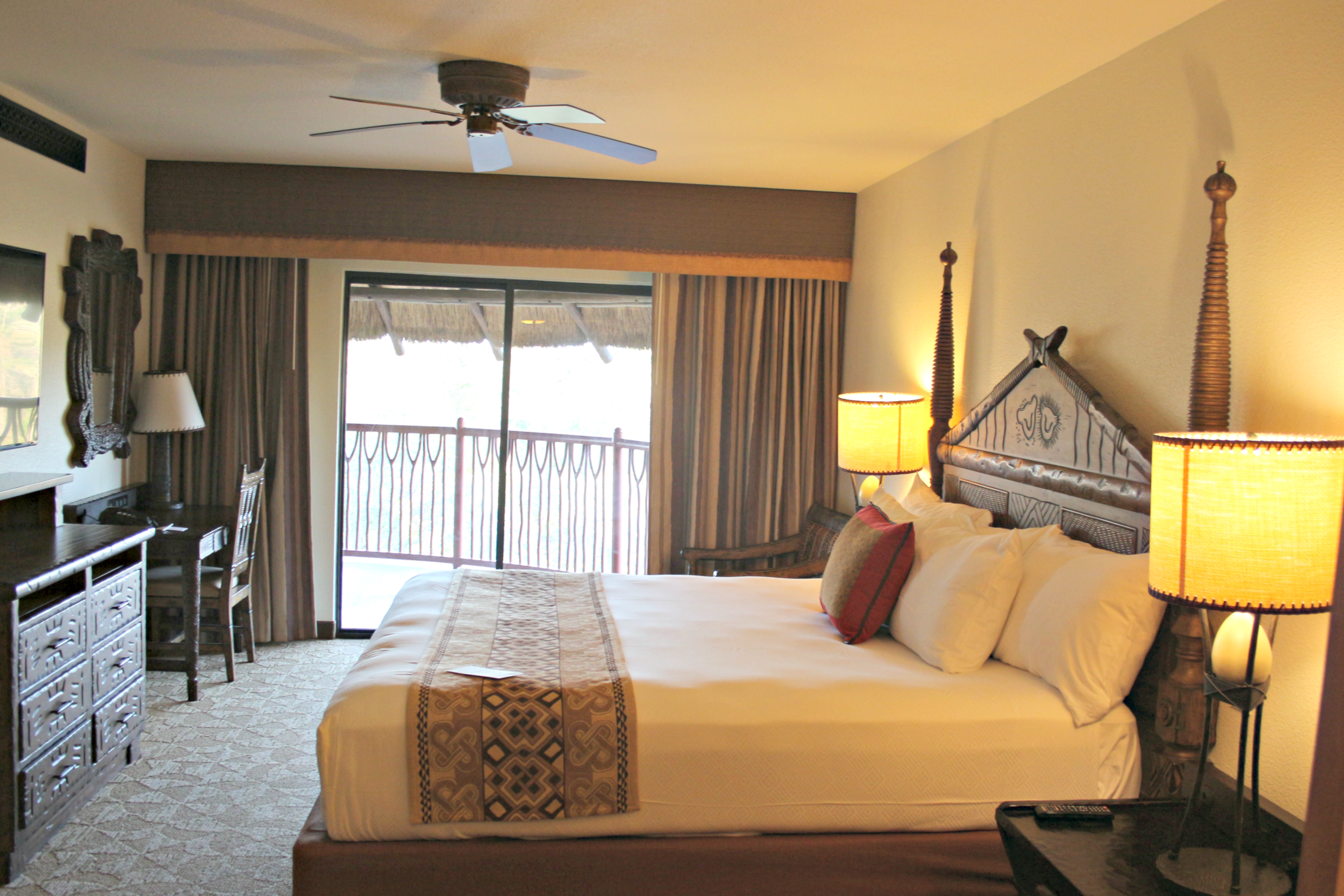 There is a full bathroom in the main part of the villa. I love this feature because it allows guests to use the facilities without going into the bedrooms. And yes, I said guests. If there was ever a place to entertain guests while you’re on a Disney vacation, a Grand Villa is it! 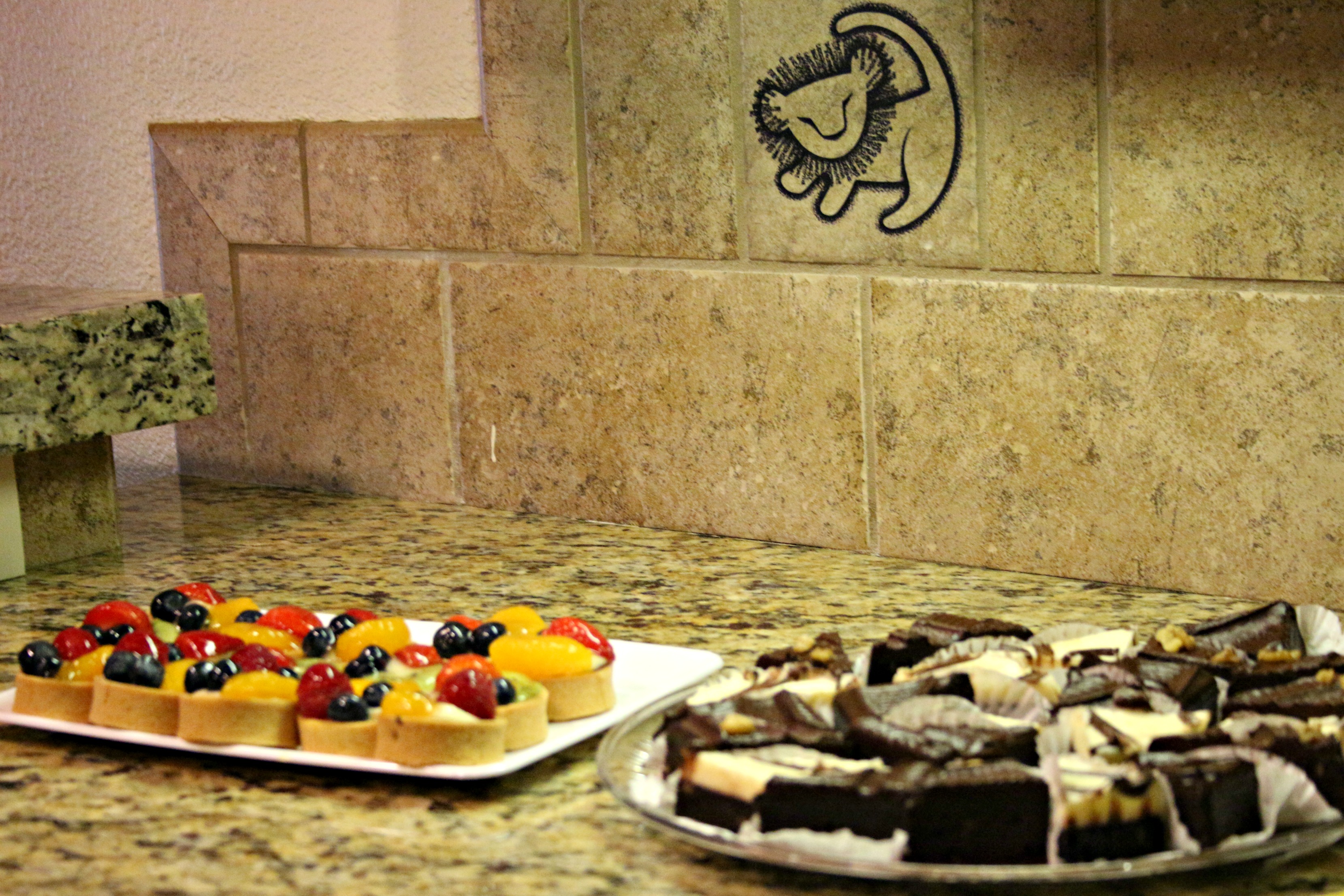 There’s SO much detail in the theming.

One of the biggest reasons in my book to stay at a deluxe level resort is all the amenities at the resort itself. Of course, we enjoy our time in the parks, but Disney’s Animal Kingdom Lodge is so much more than just a place to crash at the end of your day at Disney…it’s an environment that is meant to be savored. 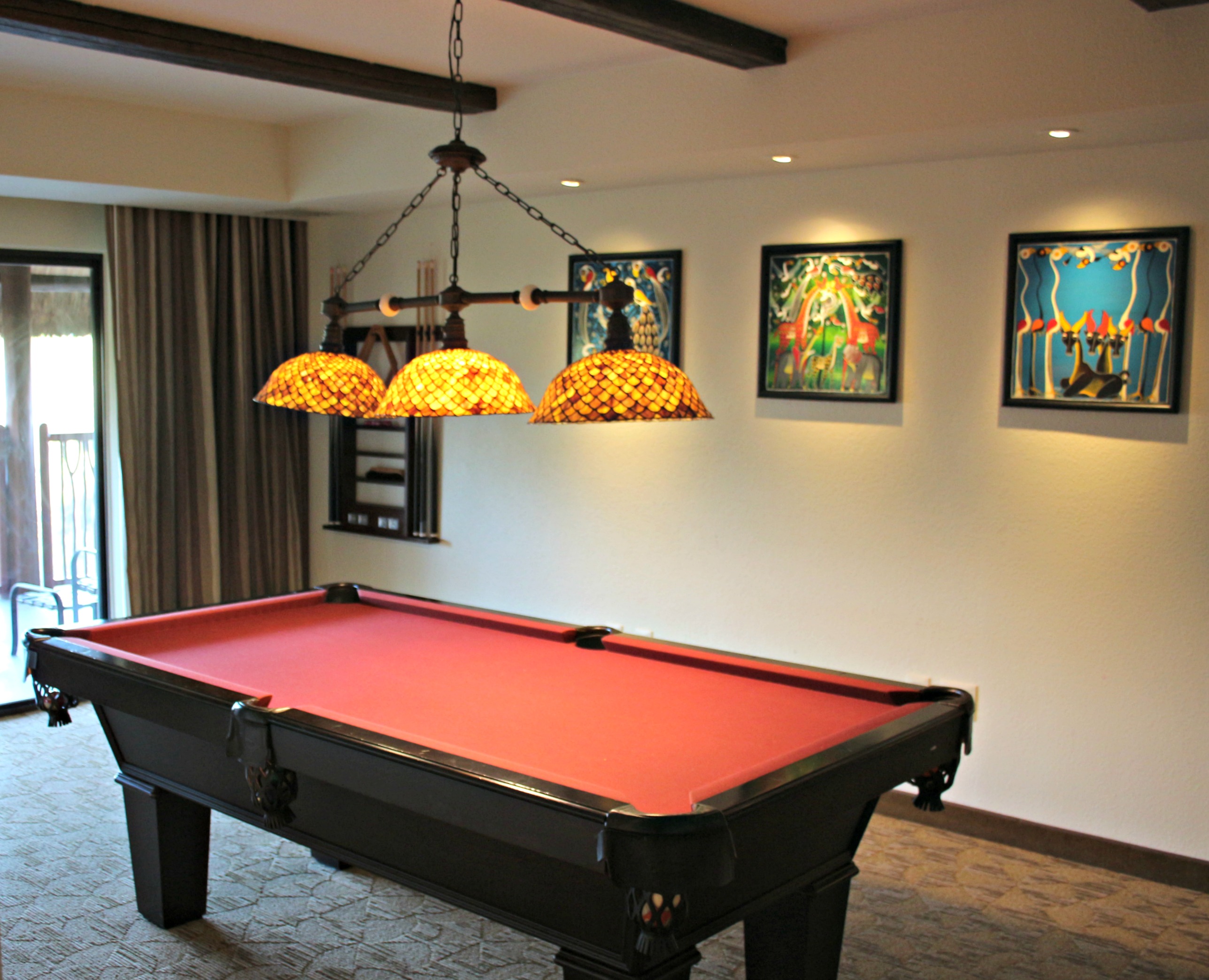 Not your average resort hotel indeed…

If you’re looking for extensive themeing as part of your resort experience, Disney’s Animal Kingdom Lodge has it. The décor in the rooms and in the common areas is amazing. It’s that magical Disney touch without being “too Disney.”

So many little touches…

The displays of African Art are very impressive and this style of décor is woven all throughout the resort. A good many of the cast members were from Africa, which adds to the overall ambiance of Disney’s Animal Kingdom Lodge. Everyone was super-friendly and fun to talk to.

In addition to the luxuriously appointed guest rooms, Disney’s Animal Kingdom Lodge is fun to explore on its own. If you stay here, make sure you allow at least one day outside the parks just to explore the resort. There are so many activities to enjoy and many of them are free. 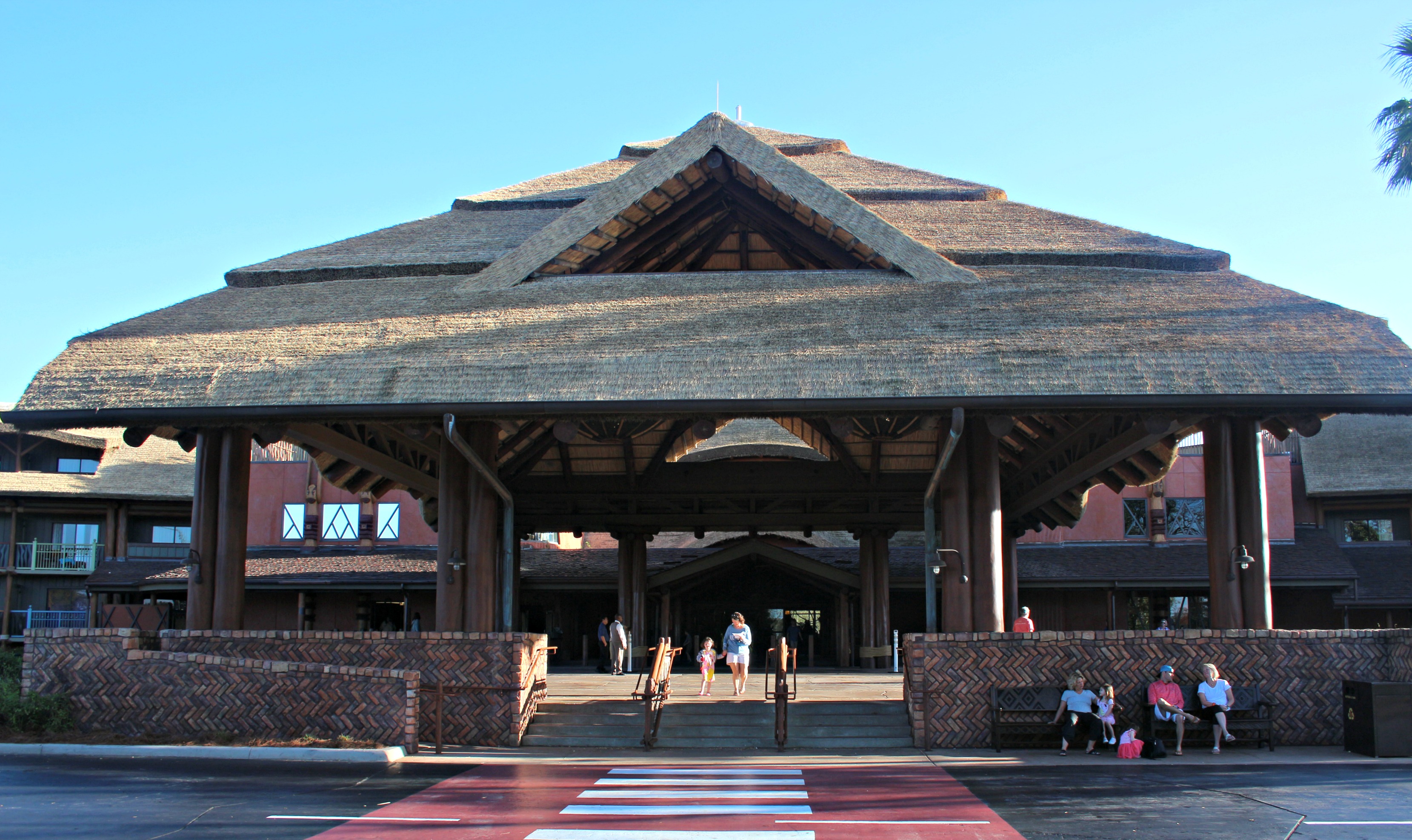 My kids got to be in a parade, listen to stories around a campfire, swim in the pool, play on the playground, and that just scratches the surface of the activities that were available. We were only there for one night and that was not nearly enough. You’d better believe I’m planning my next trip!

In addition to the savanna, one of the things I loved most about Disney’s Animal Kingdom Lodge was the fact that it was remote. Most other Walt Disney World Resorts are grouped together or located very near to other resorts (i.e. Disney’s BoardWalk.) Disney’s Animal Kingdome Lodge stands on it’s own and has a very tranquil vibe to it. 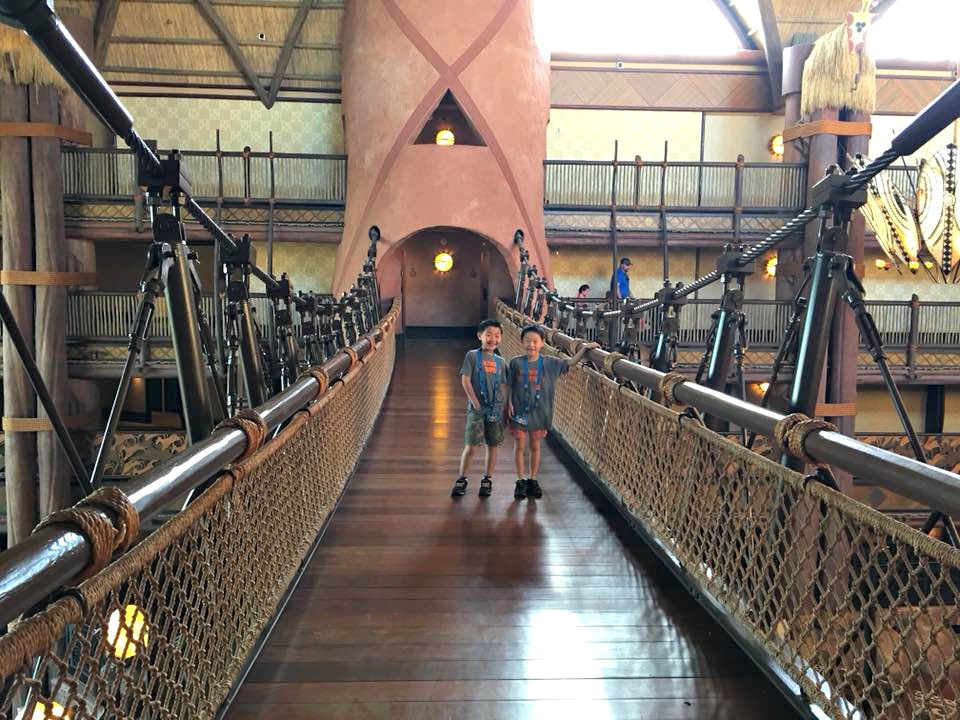 The one thing that some people think is a downside is this is the only deluxe-level resort where the only transportation to the parks is via bus. I know a lot of vacationers want to be on the monorail line but the atmosphere and the way you’re immersed in African culture will make you want to say “what monorail?” 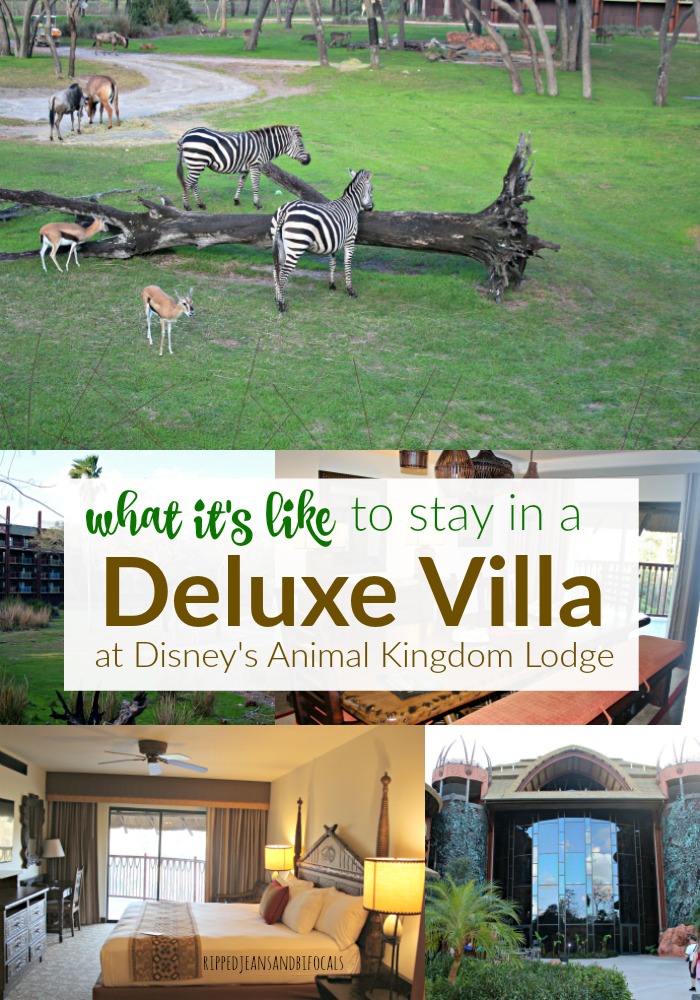 Deluxe Villas are typically reserved for Disney Vacation Club Member (AKA Disney’s time share) but non-members can stay in these awesome units. Contact Sandy and her team of experts at Instant Impressions Travel and they can talk you through your options and help you pick the perfect option for YOU, whether that’s the Deluxe Villas at Disney’s Animal Kingdom Lodge or some other location. More from Instant Impressions Travel.

For a breakdown of the differences between value, moderate, and deluxe resort hotels at Walt Disney World, check out THIS POST.

7 Reasons to use a Disney Vacation Planner

Why we love the character breakfast at Trattoria al Forno

Happy Caturday! 🐈 We got a few pictures of Re

Are you an "I'm gonna be organized and do all the

Did you know today is "Oklahoma Day?" It is! We s

I saw two seperate conversations on the internet l