To say my kids love the movie Frozen is a total understatement. Even though hearing “Let it Go” on a loop for all of 2014 drove me a little bit bonkers, I have to admit that I love Frozen, too. I’m excited to share with you this fun little tidbit: Olaf’s Frozen Adventure is coming to theaters this November!

Olaf’s Frozen Adventure is a 21-minute featurette that will run with Coco, the new Disney•Pixar feature film that opens on November 22nd. Here’s a sneak peek:

Olaf’s Frozen Adventure is set at Christmas – Arrendelle’s first holiday season since the gates re-opened. Elsa and Anna realize they have no holiday traditions, so Olaf sets out to comb the kingdom for his special friends to bring them the very best Christmas traditions and save Christmas.

That Olaf…he’s such a giver. This one is on MY family’s must-see holiday movie list.

Olaf (voice of Josh Gad) teams up with Sven on a merry mission in Walt Disney Animation Studios’ 21-minute featurette “Olaf’s Frozen Adventure.” It’s the first holiday season since the gates reopened and Anna (voice of Kristen Bell) and Elsa (voice of Idina Menzel) host a celebration for all of Arendelle. When the townspeople unexpectedly leave early to enjoy their individual holiday customs, the sisters realize they have no family traditions of their own. So, Olaf sets out to comb the kingdom to bring home the best traditions and save this first Christmas for his friends. Directed by Emmy®-winning filmmakers Kevin Deters and Stevie Wermers-Skelton (“Prep & Landing”), produced by Oscar® winner Roy Conli (“Big Hero 6”), and featuring a screenplay by Jac Schaeffer and four original songs by Elyssa Samsel and Kate Anderson, “Olaf’s Frozen Adventure” opens in front of Disney•Pixar’s original feature “Coco” in U.S. theaters on Nov. 22, 2017.

Coco is coming to theaters on Nov 22! @DisneyPixar @PixarCoco

Despite his family’s baffling generations-old ban on music, Miguel (voice of newcomer Anthony Gonzalez) dreams of becoming an accomplished musician like his idol, Ernesto de la Cruz (voice of Benjamin Bratt). Desperate to prove his talent, Miguel finds himself magically transported to the stunning and colorful Land of the Dead following a mysterious chain of events. Along the way, he meets charming trickster Hector (voice of Gael García Bernal), and together, they set off on an extraordinary journey to unlock the real story behind Miguel’s family history. Directed by Lee Unkrich (“Toy Story 3”), co-directed by Adrian Molina (story artist “Monsters University”) and produced by Darla K. Anderson (“Toy Story 3”), Disney•Pixar’s “Coco” opens in U.S. theaters on Nov. 22, 2017.

I’m really stoked about seeing this because it gives a nod to some of the culture we enjoy here in San Antonio. I love that my Chinese kids living in Texas are growing up learning all of the fun “Day of the Dead” traditions. Coco incorporates a lot of that culture and I can’t wait to see it!

There are just all kinds of reasons to be in the theaters on November 22nd, right? See you at the movies! 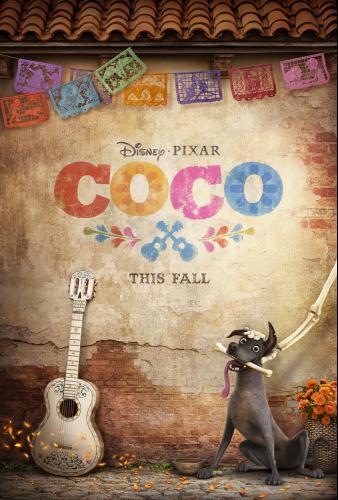