Have you ever said that?  I did, many times and you know what?  Karma was listening because she’s  all-seeing and programmed to hear every single “I never” that flies out of your pie hole. It becomes her mission in life to bite you in the ass and make you eat your words. Utter the word “never” one time and it’s on like Donkey Kong. 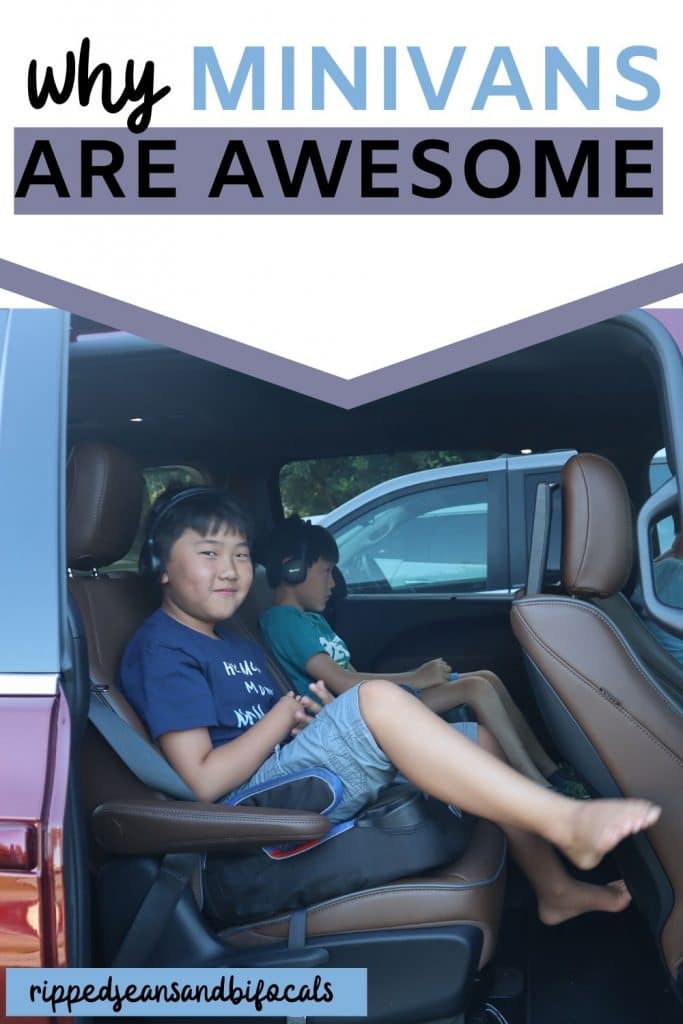 I don’t remember how many times I swore I would never drive a minivan. We bought our first – and maybe not last – minivan in 2014 when our boys were five. It was one of the best purchases we ever made.

I resisted for the longest time because I thought driving a mommy van was an insult to my coolness. I finally realized that driving a minivan has a lot of perks…see also that I’m not cool.  I still like to pretend, though.

We have a 2014 Chrysler Town and Country. I recently got the chance to review a 2020 Chrysler Pacifica Hybrid, which is pictured in this blog post. It will eventually be time for a new ride and if we get another minivan, the Pacifica Hybrid would be an awesome upgrade.

Here are six great reasons why I love my minivan. 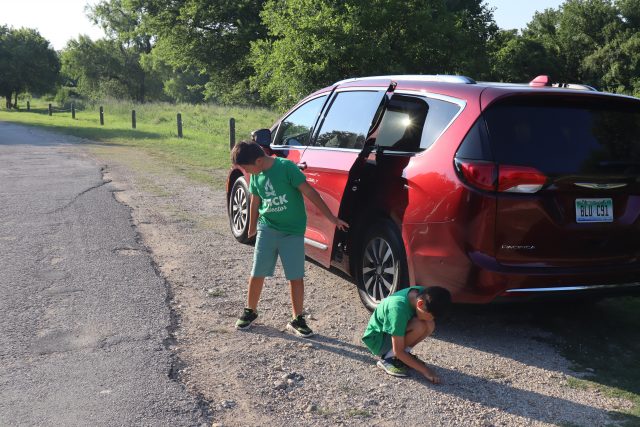 Minivan life isn’t all bad. The sliding doors are super convenient for getting kids in and out of the car. If you’ve got little ones in a car seat, it’s really easy to load them in the second row.

1. Increased distance between me and my small humans

This is easier on my eardrums and really, just all around safer for everyone. Cries of “he’s touching me” are easier to tune out when they’re coming from the way, way back. In fact, my next vehicle may very well be a tractor trailer. Plus, I’ve got dual controls on the sound system, so I can rock out to Poison and Motely Crue up front without having to pay attention to whatever annoying kid cartoon is playing on the built in DVD player. Yes, I said built-in DVD player. It’s fabulous.

The 2020 Pacifica Hybrid has a really sweet second row infotainment setup. My kids love the Uconnect Theater entertainment system with two 10-inch seatback touchscreens was my kids’ favorite feature. And, since it keeps them quiet and reduces the amount of bickering I have to put up with from the second row, I love it, too. 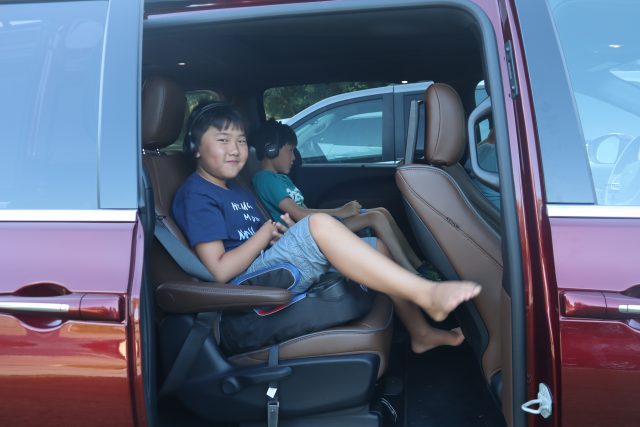 The second row screens make long car trips bearable. There’s also a control where you can adjust the sounds in the backseat and listen to something different up front. It really works!

You can pop a DVD in up front and your kids can watch a movie using the included wireless headphones. I don’t know about you, but hearing Sponge Bob from second row gets old in about 20 seconds. And, best of all? There’s a setting where the adults in the front can listen to separate audio. We can play one of our favorite playlists or tune in to a podcast and not be disturbed by the second row audio. It’s like magic.

2. When guys check me out while I’m stopped at a traffic light, I know they’re really looking at me and not my hot car.

Shut up, they are! This is totally true, as all badass minivan moms will tell you. 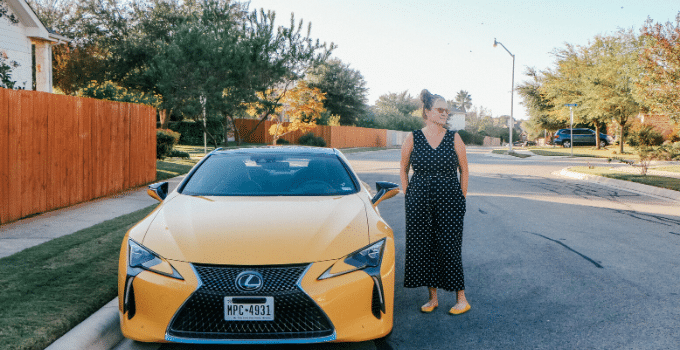 This is what I look like in my mind when I get into my mininvan. I’m OK with being occasionally delusional. This is a Lexus LC 500, by the way, and it’s REALLY fun to drive.

People mover by day and party bus by night? If I want to plan an adults-only outing we’ve got tons of room. There will probably be some rock, paper, scissors going on to see who has to be designated driver, but hey…it is what it is. Safety first, right? Drunk driving is for losers.

Most minivans seat seven and there’s plenty of leg room, even in the way back. If you have a need to transport a group of adults, this is a great way to do it.

The Pacifica Hybrid kicks some serious ass when it comes to get up and go. The added torque of the electric motor helps this minivan accelerate quickly. But seriously, the stereotype of the minivan driving 40 MPH on the freeway is crap. Most of the newer vans on the market have a surprising amount of giddy up, which is a nice feature for any reluctant husbands who may be suffering from the delusion they should be driving a sexier car. Puh-leeze. I’m not advocating driving above the speed limit (ahem) but this gem is great for highway driving…very smooth.

I can sit behind the wheel and pretend I’m in the NASA control room (don’t laugh, you probably do it, too.) I can push a button to open and close the back hatch, adjust my seats, the volume of the DVD player in the back (because I am freakin’ sick of hearing Elsa belt out Let it Go, AKA the last song ever that anyone needs to hear when trying to keep road rage at an acceptable level.) 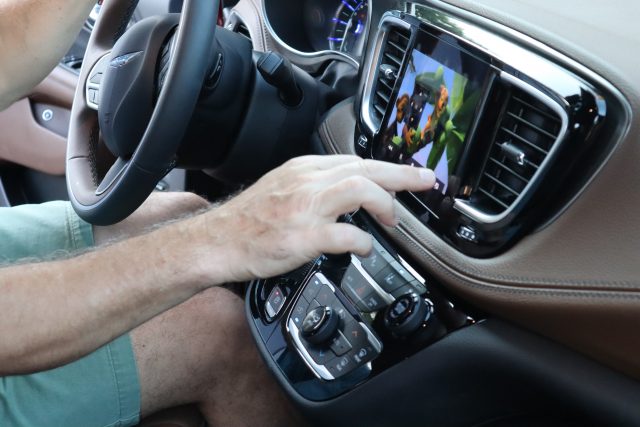 The 8.4 inch front screen is controls the audio and lots of the important functions like seat cooling and heating. Seat cooling (not on the base model) is essential in Texas.

Sometimes, I just sit in my driveway and push buttons, saying stuff like “Wesley Crusher to the bridge.” Seriously, people. Buttons are badass. 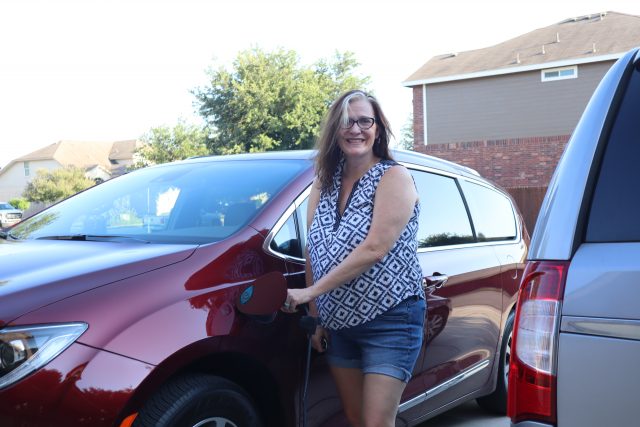 The Chrysler Pacifica Hybrid is super easy to charge. It fully charges in about 12-13 hours and you can run about 30 miles exclusively on battery until it switches over to the backup gas tank.

6. More about the 2020 Chrysler Pacifica Hybrid

« What’s on my kids’ summer reading list?
10 of the Best Water Parks in Texas »