November is National Adoption Month.  In celebration, I’m going to give you a sample of questions you shouldn’t ask that family who maybe looks just a little bit different.  And, that teacher who told you the only dumb question is one not asked? She lied.  Some questions are dumb.  Read on.

The checkout line is part of everyday life for most of us.  I guess there are some snooty falooty people that have staff to run their errands.  For the rest of us peasants, standing in line at Target is a reality.

The checkout line is a weird no man’s land where you’re sandwiched between strangers at close range. Make eye contact or no? Meaningless, awkward small talk? All part of the experience.

Most people easily figure out that my adorable Chinese boys did not come out of my hoo ha.  People are quick like that.  I have red hair and blue eyes and I’ve never been mistaken for anything other than a white girl.

Some people take the extra step and ask if my husband is Asian, just to make sure.  I have so far been pretty good natured about this but I can’t imagine questioning a stranger about their spouse’s ethnicity, or even assuming there was a spouse in the first place.  Can you?

I can’t imagine questioning a stranger about their spouse’s ethnicity. Can you? #nosy

I accept that people are curious about my family and that curiosity comes in varying degrees.  I can almost hear the wheels turning in those checkout line people’s heads.  If I make that eye contact or smile then I’m opening the door to conversation and The Questions when I just want to be a shopper.  Just a mom.  Just an “average Jill” pushing a shopping cart.

There is a window between eye contact and The Questions.  I can almost smell it.  I wish I could give a knowing nod to those checkout line people before “say, can I ask you a question” tumbles out of their mouths.  I wish I could whisk a FAQ sheet out of my bag.  I mean, why not?  I carry around enough crap in there, right?  I could hand over the info sheet and then zone out on my phone like everyone else standing in line.

My boys are adopted from China.

Yes, they know.  (we’ve actually had people ask if we plan to tell them they’re adopted. Here’s your sign, honey.  They don’t understand everything but they know they were born in China and that their dad I rode a big airplane to China to bring them home.  They know their Chinese names.  We’ll say more as they get older but that covers things for now).

I’m sure they’re Chinese (I have been told they look Korean, Japanese and Mexican).

My husband is a white dude from Michigan, but the mailman might be Asian.   We didn’t exchange a lot of information.  It’s hard for me to talk about. 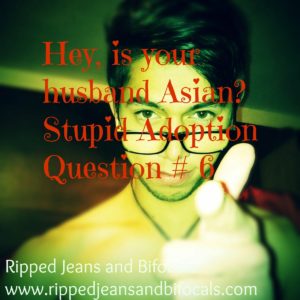 Do I have any real kids or normal kids?  All of my kids are real.  If you pinch them, they will make a noise.  (Don’t actually touch my kids, k?)  Normal is up for discussion.

All of my kids are real. If you pinch them, they’ll squeal. But don’t do that, k? #adoption

No, I can’t have “my own” children.  If you want to ask me more, let’s take this little chat beyond the checkout, k?  And, if we’re gonna talk about my ovaries and stuff, you’re going to have to buy me a drink.  I think that’s fair.

No, I can’t have “my own” kids. If you want more info, you’re gonna have to buy me a drink.

They will be able to vote when they’re 18 unless the laws change.  And yes, I know that as naturalized citizens (real ones, btw) they won’t be allowed to run for president.  (these are not things I spend time thinking about.)

Yes, they’re brothers.  Real brothers.  I know what you meant.  They are REAL BROTHERS. 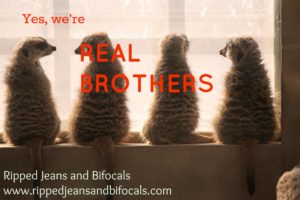 They eat macaroni and cheese and most other “kid food”.  I’m very lucky they’re not picky.  I’m not sure if they “used to eat cats and dogs”.  Wow.  Thanks for asking that.  Something to ponder.

We have no plans to enroll them in gymnastics, violin or competitive ping pong.  We’re not sure if they’ll be “really good at math”.  Right now, I’m more focused on getting them to wipe their own butts.  Maybe my expectations are too low, but that’s where we’re at.

I’m the “real mom”.  The subject of our sons’ birth mothers is not something we talk about outside our family.  And, my kids can hear just fine.  How do you think questions like that make them feel?

How did we “get boys”?  Well, we didn’t “get” them.  They’re not Birkin bags or organic avocados.  They’re not accessories.  While you might think that all kids adopted from China are girls, things have changed and there are lots of boys available for adoption.

How much did they cost?  Say!  Is that your real hair color because your eyebrows are this really dark shade that doesn’t match your hair…and what is that thing on your chin?  Is it a birthmark or just a zit?  I’m just curious.  Seriously if you’re interested in adoption, contact any reputable adoption agency and they can give you the deets.

We adopted from China’s “Waiting Child” Program, which takes 12-18 months on average.  Yes, waiting was hard.   Yes, they were worth it.

If you have just asked me “so, is there anything wrong with him?” take cover.  I throw a mean left hook and I’m a little unpredictable when I haven’t had enough coffee.  Yes, my kids have some mild medical needs.  Yes, those needs were a factor in their being placed for adoption.  Do I really want to talk about it in Target?  No.  I think I’ll answer the next person who asks with “why yes, there is something wrong with him.  He has low tolerance for dumbasses.”

We chose China adoption because it was the best adoption choice for our family.  If you asked me why I didn’t adopt from “my own” country because there are “so many American kids” to adopt, then I think you need to get smart about the foster care system in the United States.

If you told me my kids are “so lucky”, thank you.  I know you meant well and I tried to accept that compliment gracefully. However, I want you to think about what your words will mean to my kids when they are old enough to understand them.  While I am a really cool mom and they are totally lucky, those kinds of comments might make them feel like charity projects versus just my kids.  It might not, but something to chew on. These kids needed a family.  I had one.  Simple as that.

I’ve been asked all these things and more by strangers or people I don’t know well.  These are some intensely personal questions, people.  If you are doing the asking, keep this in mind:

Curiosity doesn’t give you the right to info.

If you are a parent who is in the process of an international adoption, well, I just gave you a peek at what you’re in for when you stop by the store for milk and doggie treats.

Use caution when asking an adoptive mom any variation of “can’t you have your own”.  Those kids you’re staring at are her own.  Besides, a family whose chosen adoption after struggling with infertility or miscarriage might not want to share the particulars in the checkout line.  Or playground.  Or church.  Be careful when asking any woman about her ability to make babies.  It’s a touchy subject.

So, think before you ask that question, k?  You just might get more than you bargained for.  I would love to see the look on someone’s face if I suddenly launched in to a discussion about the nitty gritty details of my lady bits.  Just once..
Did you like this post? Sharing is caring, people! Pin it to one of your favorite Pinterest boards, tweet it, or if you’re really fancy, share it on G+, Stumble Upon or whatever the cool kids are using nowadays…I can’t keep up. And, don’t forget the old standby Facebook. There are some share buttons below and if you clicked them…well, that would be just awesome sauce. Thank you

Most of you know my son Zack has a limb difference