Dora the Explorer turns 15 this month.

I will just let that sink in.

Pity me, people. I have a 23-year-old and two 5-year-olds…and yes, I know that’s a big gap between kids.  Laura was eight when Dora first came on the air. We had about a year and a half of “OMG everything about this kid with the weirdly large head gets on my ever-loving last nerve” before she moved on to more mature (but equally annoying) shows such as the Wizards of Waverly Place, Hannah Montana and iCarly. Don’t even start me on them.

I had about a 10 year reprieve from truly annoying children’s television.

When we became parents of a two-year-old at midlife, we were thrust into the world of Mickey Mouse Club House, Handy Manny, and he-whose-name-must-not-be-spoken-aloud…hint: it starts with Cai and ends with llou…that little bald brat sends parents everywhere running for the wine and Tylenol, amiright? And hey newbie parents…don’t Google Caillou.  Don’t. Do. It. You will have to trust me on this.

And Dora. She and her backpack were still around.

I hate Dora…and her little monkey, too.

So…I’m a Dora hater…I’ll just put that out there.  She’s got her redeeming qualities, such as the fact that I can have 24 uninterrupted minutes to do whatever I want…poop in peace…shower…pin all the things…that, and the fact that my kids are practically bilingual…but I still hate her and her stupid, creepy backpack.

But…she’s 15. If our little melon-headed friend were a real girl, she’d be getting her learner’s permit (eek!) and probably be giving her parents major attitude…because 15.

Dora is 15, moms and dads, and still going strong. It looks like she’s gonna stick around awhile.

Here are 7 things that get on my ever-loving-last-nerve about Dora: 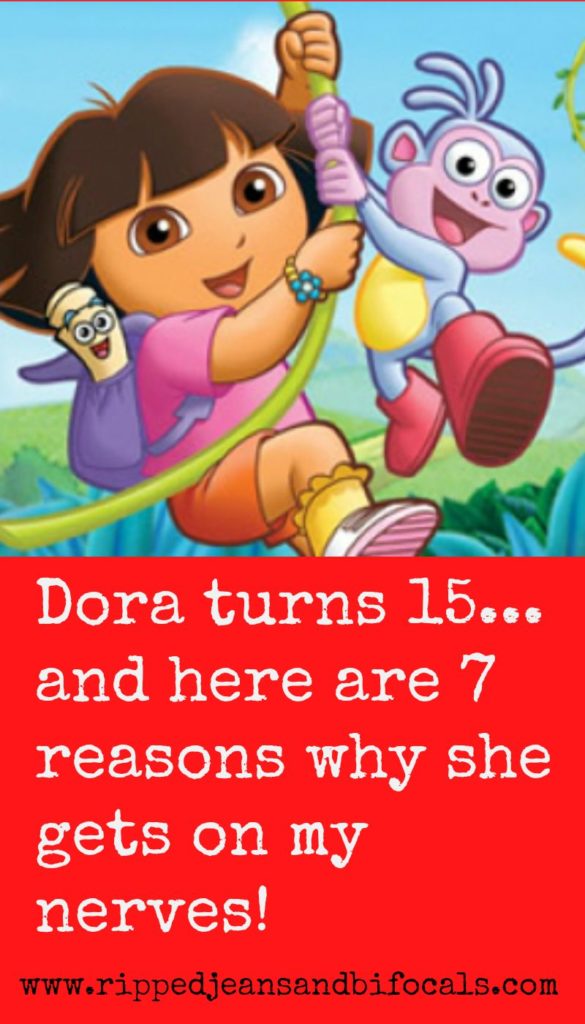 If you hear “Dora, Dora, Dora the Explorerrrrrrrrrr” in the morning, that ear worm is all yours for the entire day.  Although…in the big picture of annoying children’s songs, this one is low on the list.

It creeps me the hell out. That’s all.

Reason #2 Dora annoys me: stuff that shouldn’t have a face has a face. Creepy.

Where are the adults? Where are her parents? Why haven’t they taken her to an optometrist or bought her some shorts and tee-shirts that actually fit? Why haven’t they introduced her to some real kids so she doesn’t have to hang out with a weirdo monkey all the time? This shit keeps me awake at night, people.

Why do we have to yell “Swiper no swiping” three freakin’ times, people? Wouldn’t once be okay?  This nonsense has invaded our dinner table in the form of some weird game my husband plays with my kids to try to get them to eat their food…if they think he wants to “swipe” it then they suddenly become super interested in that last stalk of broccoli. Effective but man…I am running for the wine and Tylenol before it’s really respectable.

Like I should know where her stuff is, you know? Whatever she is looking for is either behind her or right in front of her nose. It makes me want to slap her and scream “open your eyes, you blind little brat!” I mean…if she’d actually take a second to look around her without asking me where her stuff is…well then my wine bill would maybe be lower. Just saying.

Can you imagine if your child had a playdate with Dora (shudders)? She doesn’t speak quietly…her regular communication is some sort of bizarre, deranged cheer that makes me want to run for the wine and Tylenol. Are you seeing a pattern?

Swiper. The fox being the bad guy is so cliché.  And why does he sometimes wear a mask and sometimes not? He’s a bad guy so we have to put the bandit mask on him so we know he’s a bad guy? Because anyone who has on a bandit mask might as well be wearing a sign that says: “hey boys and girls: Ima gonna steal this blind kid’s shit.” If Swiper were in a police lineup with other cartoon foxes, I am pretty sure I could get to positive ID without his little bandit mask.

But it’s not all terrible.  Dora makes me feel better about my own parenting. I know where my kids are. They’re in my house getting on my nerves making me run for the wine and Tylenol but I know they’re not lollytrotting around town talking to their backpacks and asking other people to help them find their stuff. Come on…that’s what they have me for.  My kids wear clothes that fit and if they displayed such an obvious lack of being able to see the stuff that’s right in front of their noses, they’d be seeing an optometrist.

Yeah…I claim to be a Dora hater, but I actually have a favorite Dora episode:

The Magic Stick. Dora and Boots find a “magic stick that can do the trick.” The magic stick had many uses: spare parts for a paddle, a rung on a ladder and the best one ever: to scratch an itch. I mean…who doesn’t like a magic stick that does the trick?”

Hey…we do what we have to do to do to make that whiny, high-pitched voice just a teensy bit more bearable, amiright?

Happy birthday, Dora. I hope you have an awesome quinceanera…that is assuming you can actually locate your parents.  Sure, you’re a little weird but I guess you’re basically harmless.  Just don’t turn out like this kid:

Thanks for reading!  If you’ve enjoyed reading this, you NEED to come hang out with me on Facebook! A click a day boosts my ranking on Top Mommy Blogs!