Adoption and the movies – things to consider

Before I took my kids to see The Good Dinosaur I consulted the experts of Facebook. Normally, I wouldn’t think twice about taking my two five-year-olds to see anything made by Disney but I’d heard some parental chatter about the movie being disturbing and potentially upsetting for younger kids.

Spoiler alert.  If you haven’t seen The Good Dinosaur and you want to be surprised, stop reading and come back later. We can talk then.

One of my Facebook friends made a comment about the movie being recommended for adopted children and since my kids are adopted, that comment piqued my interest. I ended up deciding to take my kids to see The Good Dinosaur, in spite of the warnings that it was “too scary.”

But is “adoption in the movies” a thing?

About that. My kids were not scared, for the most part. There were a couple of intense parts: the daddy dinosaur died and a group of hungry Pterodactyls tried to make a meal out of Simba the dinosaur. Oops. I think our hero’s name was actually Arlo but yeah, it was a lot like The Lion King.

Anyhoo, the adoption piece came into play with Arlo’s orphaned, cave-kid sidekick. When the two were engaged in their “getting to know you” communication, they used a circle drawn around sticks in the dirt to define what a family was. The sticks represented people in the family and the circle they were contained in represented the family bond. Or something like that.

Toward the end of the movie, a family of cave people showed up and embraced the little cave kid, whose name was Spot. Although they were from the same species, the physical differences between the cave family and Spot were noticeable, meaning a family of silvery blonde cave peeps were all too happy to give a home to a little dark-headed boy.It truly was sweet.

Arlo the dinosaur tried to go away and leave Spot with the humans (AKA his own kind), who were clearly accepting him into their fold. Spot was having none of that and wanted to go with his cool dino pal. Arlo nudged Spot over to the humans and drew a circle around them with his nose, and with that gesture, Spot understood the humans were his new family and they all walked off into the sunset to live happily ever after. Don’t think about that whole ice age thing, okay? It spoils the mood.

This got me thinking. Adoption shows up in the movies in various ways. My kids are adopted. They watch movies. As they get older, they’ll watch more movies and they’ll graduate beyond watching stuff like Sponge Bob and Mickey Mouse Clubhouse (please I hope I hope I hope.)

My children will have to learn to process on-screen violence, sex and stuff that conflicts with our family values. I mean…I’m not going to let them start watching R-rated movies tomorrow but there will come a time when they’ll be watching movies that have more depth than kid’s cartoons. Movies I don’t chose. Movies I might not know they even watch.

My job as a mom is to censor, talk and listen. And then let them go #AdoptionTalk

My job as a parent is to censor, to talk, and to listen. To ask questions about their perceptions of the stuff they see on the big screen and on television, too. To set limits when I think they’re needed…and at some point in the future, to let go and hope I’ve taught them well.

But kids who come to our families through adoption…there’s an extra layer with some movies. Right?

My boys didn’t catch the adoption connection with The Good Dinosaur, but an older child probably would. A child who’d been in foster care for an extended period of time would probably attach great significance to that part of the movie.

Adoption is present the movies and on television. For example:

Teen Mom (I know, I think this show is garbage, too);

Orange is the New Black;

And I’m sure there are many others. The entertainment industry may represent adoption in an inaccurate and unrealistic light (Annie) or they may hit the “this is real” nose on the head, like Caitlyn and Tyler of Teen Mom who gave their daughter up for adoption and like Lilo and Stitch, which depicts adoption by an older sibling, which is often what adoption actually looks like.

Adoption is in the movies and on television. As parents, we have the obligation to be aware of what’s influencing our kids. As adoptive parents, do we have an extra responsibility to know what might elicit a trigger warning?

As adoptive parents, we walk the fine line between not wanting to treat our kids like they’re different and realizing that they are different. A child adopted as a teen or tween is going to identify with a movie like The Blind Side in a way that a child not connected to adoption won’t get.

Do we censor? Do we insist on accompanying our kids to the movies long past the time where our kids are cool with mom tagging along? Do we preview the movies our kids want to watch? Do we take extra steps to open up conversation after our kids see a movie where adoption is mentioned?

My kids know they’re adopted…but they’re young. Being able to wipe their own asses is a pretty new thing. We haven’t peeled back the onion on some of the tough adoption questions because we’re letting our kids lead the way…and while they haven’t connected the dots on the hard stuff, we know it’s coming. And we think we’re ready…which means we are in no way prepared to handle this. 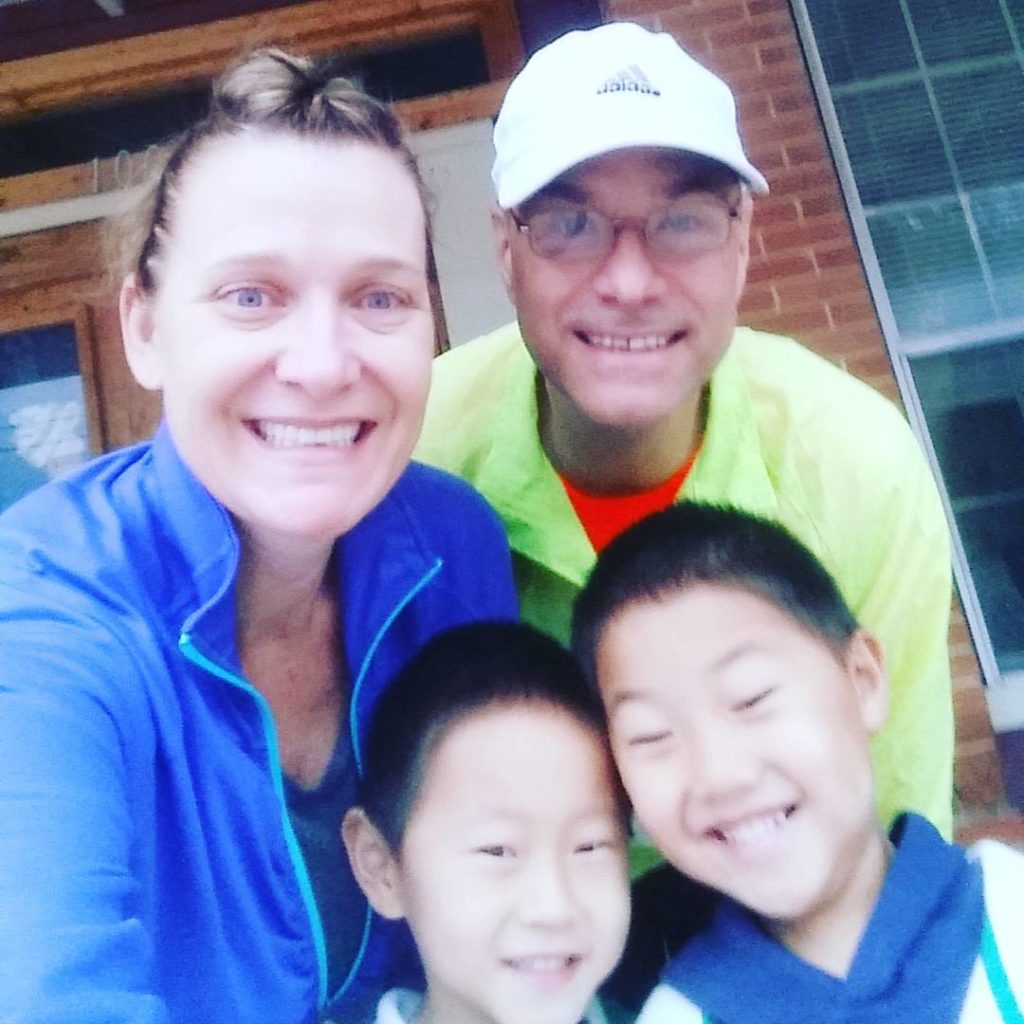 Sunday AM 5K. Remind me why I thought this was a good idea? #running #familyfun #familyrun #idratherbeeatingpizza

But we will. We’ll muddle through.

I do not have the answers. I raised the question but I don’t know the answer. The right path is probably vastly different from family to family.

But, adoptive moms and dads. We are in this together. Give me your tired, your clueless, your “I have no idea what the hell I’m doing.”

I gave you a blog post with questions that I don’t have answers for. I don’t have suggestions or opinions because this is such a diverse topic. So much of this is contingent on age and adoption circumstances. Hopefully, I can offer you a place of support.

As parents, you know your child’s story and your Spidey senses will probably clue you in to how your child will react…although not always.

Maybe this is just one way our families are different…and maybe that’s okay.

Adoption is hard…no part about this choice is easy…and not matter how old the child is, their feelings and questions about their beginnings to do not diminish.

Parents, we do what we can do. We watch. We listen. We talk. Sometimes, we censor. But most of all, we hope.

Do you have a story of how you’ve navigated a discussion sparked by a movie? I’d love to hear in the comments!

Thank you for reading. Are you following in Facebook?

If you have an adoption board on Pinterest, well…here ya go: 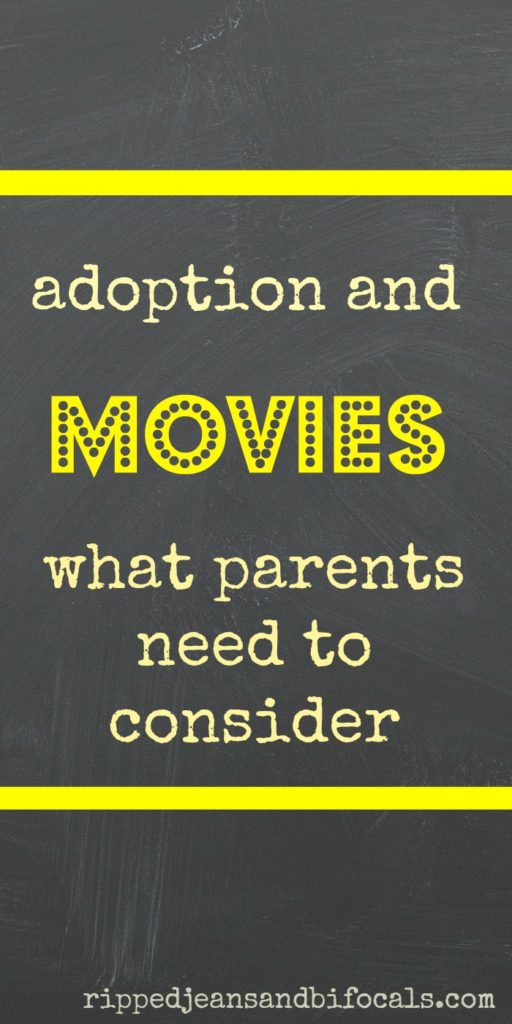 Adoption in the movies: things to consider #Adoption Talk

Today’s topic is Thankfulness in Adoption. Grab a button for your post and join Erin, Jamie, Jenni, Jill, Madeleine, Rachel, and me!   New to linking up? We’d love to have you join us, here’s how.