I normally avoid using the term “white trash” because I think its kinda mean. I don’t say stuff like “what in the fresh hell” because…well, because the ordinary “what the hell” seems to work okay for me.

But today, “What in the fresh hell is going on with these white trash bitches at Walmart” came outta my mouth. Yes, I said bitches. I did. Out loud. My kids heard me and I had to do some backpedaling and apologizing for my inappropriate choice in words.

You have two choices here. Actually, three because you can click exit right now while the brain cells you have are still intact.

You can watch this video and kiss four minutes of your life goodbye OR you can read my synopsis below:

Woman hops off mobility scooter in an Indiana Wal-Mart, opens can of whoop-ass on another shopper. Both are wearing “yoga pants.” I don’t know why I thought it was important to mention but whatevs. Women start pushing, shoving and hair-pulling, which resembles awkward, groping sexy time more than fighting. A little boy tries to stop the fight by pummeling our brawling beauties with shampoo bottles. Because that usually works, I guess.

Aside from wonder boy there’s no attempt to break up the fight although plenty of other Wal-Mart shoppers are watching. Recording. Snickering.

My initial reaction was disgust that these women would behave that way in public. Actually, my initial reaction was “I think we need milk” but nevermind about that. My research revealed that one woman was actually defending a store employee against some kind of racial slur. And yes, people, my research starts with Fox and ends with News. 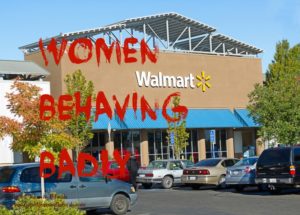 Heart in the right place or not I went a little sanctimommy on the woman who seemed to think an appropriate problem-solving method was to hop off her scooter and start a WWF-style smackdown in the hair products aisle. By the way, she was pretty agile, considering she needed a scooter to get through a trip to Walmart. I shook my head at the behavior of the little kid, tsk-tsking about how he was a product of his raising.

No, it’s not okay to behave that way in Walmart or anywhere that’s not connected to WWF. Of course not. It’s not okay to call people names and, you may disagree with me on this one, but responding to assholery with violence isn’t usually the best plan.

But we are the problem.

Would we react the same way if we saw a woman being sexually assaulted in public? What about a child being mistreated? And yeah, we can probably all agree that this hair-pulling hot mess of a fight in Walmart is probably a little bit of a joke but what if it were a couple of 200-pound guys with big muscles making hamburger meat out of each other’s faces? Would we react the same way? Would we snicker and film and make comments about how entertaining this shopping trip was turning out to be?

Do you think it’s ok to whip out your phone and video a fight? Then maybe you’re the problem…

Would I have jumped in the middle of this melee?  Would I have dodged the stray bottles of conditioner and tried to play hero by pulling these two apart in the middle of Walmart? Uh…no. Not even, but what I find so disturbing is that no one seemed interested in making an effort to get these women to knock their crap off. I guess to do so would have been an end to the impromptu side show, huh?

No real effort was made to call someone whose job it is to deal with these kinds of events, like store security or the cops. Other than one weak-sauce attempt to tell the little boy not to hit the lady with the shampoo bottle, bystanders seemed totally cool with the fact that he was involved. As fights go, this one was pretty tame but there seemed to be zero concerns that someone might actually get hurt.

I hesitated to write my thoughts on this down because to do so perpetuates the “OMG it’s a train wreck and I have to look” aspect of this. The video has already been viewed millions of times and is probably being met with the same type of reaction that I had:

“What in the fresh hell is going on with these white trash bitches at Wal-Mart?”

But I say there’s a bigger message. Is this the example we want to set for our children? Forget about the two women who fought in the middle of Walmart. This isn’t about them. When we see someone being hurt or mistreated, do we want our kids to know that our reaction is going to be “hang on, sweetie. Let mommy get her phone out so she can get this all on video because daddy will never believe this! Oh, and stand over there so you don’t get in the way of the ladies rolling around on the floor, k?”

Do we want our kids to see that we’re laughing and making fun as we upload the video to YouTube and Facebook?  Do we want our children to think a Walmart fight is our idea of share-worthy entertainment?

No. That is not the example I want to set for my children. Walk away. Use incidents like these as teaching moments if it fits but don’t perpetuate the problem by turning bad public behavior into an opportunity for some free entertainment.

We can do better.

What do you think about the Walmart fight? If this video bothered you, what bothered you the most? If it didn’t faze you, will you share why not?

« How adoption changed my friendships
Are the ‘mommy wars’ the new cliques? »