Someone once said “I believe in being honest with my kids, 101 percent.”

That someone wasn’t me. I lie to my kids all the time.  I’m not just talking about the trifecta of deception:  Santa Claus, the Easter Bunny and the Tooth Fairy.  I don’t creatively bend the truth.  I straight up lie like Pinnochio.  Am I ashamed?  Hell no.  Lying to my kids saves my sanity, not to mention time and money.  And sometimes, it’s just fun to eff with them a little.

Lying to my kids saves time and my sanity. Plus, it’s just fun to eff with them a little 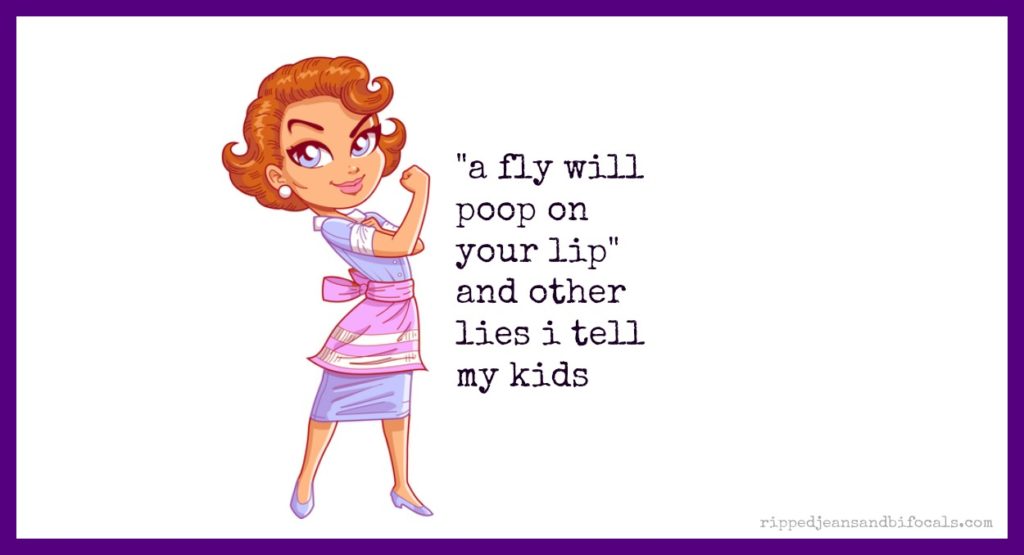 Here are seven of my go-to’s:

In a few years, my kids will be old enough to understand that a few tears or even an all-out nuclear grade meltdown won’t cause their face to freeze mid-wail. But for now, this little lie has a better than 50 percent chance of getting my crying kid to shut it. So, I take advantage of that. Zero guilt.

2. A fly will poop on your lip

This is a hand-me-down. Every time I stuck my bottom lip out when I was a kid, my mom would scare me with the possibility of fly poop on my face.  Technically, could be true, I guess.  It worked for me and it works for my four year old bottom lip sticker-outer.  Apparently fly crap is scary to a little kid.

This is reserved for every annoying automatic pony ride thingy in front of the supermarket. There’s a time and a place for shit like that:  it’s called Chuck E. Cheese in my neck of the woods.  Taking time out from my errands to feed coins in to a pony, car or airplane that jiggles and bounces for all of eighteen seconds only to be met with cries of more, more…ain’t nobody got time for that.

Easier just to breeze by and announce in a mock-regretful tone “sorry, darling, That’s broken.”  Occasionally some “fun mom” will screw it up for the rest of us by actually letting their kids ride these things.  If that’s you, knock that shit off, will you?  People like me need to get in and get out of the store and don’t have the time or interest to indulge in a mini carnival.

This is reserved for anything that my kids want that I don’t feel like sharing. Being a mom, I’m usually resigned to going halfsies on anything that looks like it tastes good, but some things aren’t shareable like Klondike Bars and anything made by Dove.  I have no shame about snarfing down my treats behind the locked bathroom door at ten O’clock at night but but when I get caught, I tell my kids with a straight face that its way too spicy and that it would burn their mouths. Really, I’m just being kind by denying them.

I know this kind of lying has a limited shelf life. Pretty soon they’ll be worldly enough to know that no ice cream on this planet is spicy and that if I’m eating something in the bathroom, it’s extra good and they definitely want a bite.

When I’m behind a locked bathroom door it means I need my special alone time.  I recently installed the Pinterest app on my phone  so I’m probably oohing and ahhing over recipes and DIY projects that are way above my skill level. Being behind a locked bathroom door might mean I’m having some chocolate I don’t want anyone to know about. I might have a glass bottle of wine in there.

Being a mother in a large-ish family means alone time is pretty much nonexistent, unless I’m claiming to be on the crapper…and even that isn’t a guarantee.  I might be eating, drinking or stalking people on Facebook, or I might just be soaking up a few minutes of blissful aloneness.  My payback will be the mess that the kids have made while I’ve been locked in my she-cave, but it’s usually worth it.

For now, my family believes my little lie about Irritable Bowel Syndrome. I’ve got a good thing going with “I’m pooping, kids” so I’m gonna milk that as long as I can.  You would, too.

What this really means is “if you don’t go to sleep, mommy and daddy are going to crack open that second third bottle of wine.”  It means we’re going to get well and truly blitzed while we’re waiting for you to pass out so that we can assemble whatever piece of Melissa and Doug’s finest we’ve decided to let Santa take credit for.

Confession: there’s no “we” involved in assembly of Christmas toys.  I’m a supportive wine-drinking couch potato who periodically mutters things like “looking good, honey” or “they’re really going to love that.” But Santa will come, no matter how late you stay up, kids. The Christmas toys might be put together with chewing gum and hot glue and mommy and daddy may be a little bleary eyed on Christmas morning, but it’s all good.

7. I’ll take that iPad away

I’ll freely admit to using electronic entertainment as a babysitter from time to time. Okay, several times a week  daily.  When my boys get out of hand, the first thing I do is threaten to take their iPads away.  Sometimes I even stalk over and act like I’m going to grab it from their sticky little hands.  Pul-leeze.

Sometimes I need my small humans to be engaged in something besides pulling on my shirt and whining for Fruit Rollups. Maybe I want to blow dry my hair without fear they’ll burn the house down.  Judge if you like.

In all seriousness, I don’t believe in lying to kids about important stuff, although I am a never say never kind of girl. I’ve told lies to my kids in the spirit of self-preservation and personal comfort levels, but in general, I believe the truth is easier when it comes to important stuff…except stuff like what I’m really doing when I’m locked in the bathroom.